In 1888 the side streets around Madison Square were changing as upper-class citizens left their comfortable brownstone residences for neighborhoods further uptown. Here, on November 13, William Francis Oakey died in his home at 125 East 24th Street.

According to his obituary by the New Jersey Historical Society, he “entertained at his house many distinguished people, his and his wife’s friends.” Among those was the poet William Cullen Bryant. The article noted the “dancing was mixed with the excellent music that nightly sounded in his parlors. He lived luxuriously, but without display.”

With Oakey’s death, the nightly music in the parlors came to a halt and within the year the house was gone.

In its place came The Beechwood – a residential hotel designed to cater to the wants of well-heeled tenants who did not want to be bothered with the tedium of running a household. Residential hotels were just appearing and were, in effect, apartment houses by today’s definition.

The brick and brownstone building rose six stories over a roomy basement. The entrance was sheltered by a deep brownstone portico into which THE BEECHWOOD was carved. Rough-cut brownstone blocks and paired Romanesque Revival windows on the first floor created a visually-substantial base. Stone carvers embellished façade and cornices with birds, foliage and whimsical faces.

The new residents were lured with the latest in domestic technology, including an elevator.  Among the first to move in was Jacob Bebus in 1889. It was a time when medical conditions like dementia were not yet understood. His 80-year old mother, Mary Bebus Bogel, left her home at 214 E. 107th Street to see her son’s new home. When she was found wandering and confused, police took her to the station house.  Finding nothing criminal, they let her go. Mrs. Bogel never made it to The Beechwood.

The early years saw a tenant list filled with respectable and highly-educated names. “Miss Manning,” a member of the Chancel Committee of St. George’s Church on Stuyvesant Square, lived here in 1896. It was the home of gynecologist Dr. Margaret E. Sullivan who studied in Dresden and Paris, and of Remington Squire and his wife Mary Louise Clary Squire. Squire was a member of the editorial staff of the New York Journal.

As World War I approached, The Beechwood continued to attract the upper class. Duncan Gilbert Harris was here in 1907, a member of the real estate firm of Harris & Vaught and of the Racquet and Tennis Club and the Harvard Club. Banker and broker Daniel A. Lindley, a member of the firm Field, Lindley, Wiechers & Co., died here in 1915.

On May 19, 1921 The New York Tribute reported on the wedding of Paula Augusta Matsner who lived here with her widowed mother, Mrs. Augusta O. Matsner and her sisters. She married Sydney S. Breese who was employed by Alexander Graham Bell doing “experimental work.” The newspaper noticed that “Announcement of the engagement came as a surprise to Mr. Breese’s circle of society friends day before yesterday.”

The newlyweds passed the summer aboard Breese’s yacht, the Filatonga.

Five years later Mrs. Charles R. Scarborough brought unwanted acclaim to The Beechwood. Mrs. Scarborough was the Chairman of the Women’s Auxiliary of the New York Port Society and was in charge of the Independence Day and “Uncle Sam Night” celebrations. She announced to the press that the singing of “The Star-Spangled Banner” would be barred.  Instead those attending would be asked to join in the singing of “Yankee Doodle,” “My Country ‘Tis of Thee,” and “God Save the King.”

Her reason was that “in her opinion the words and spirit of some of the stanzas in the song were not in accord with the friendly feeling now existing between the Unites States and Great Britain,” according to The New York Times on June 30, 1926.

The patriotic public was not pleased.  Mrs. Scarborough received letters threatening physical violence, some written by the Ku Klux Klan, and similar telephone calls. “One note suggested that she should be horsewhipped, and the writer said he would be pleased to apply the last 100 times,” reported The Times.

Mrs. Scarborough escaped without a horsewhipping.

Among Mrs. Scarborough’s well-respected neighbors at The Beechwood was Mrs. Abram S. Hewitt whose pedigree included names like Shepard, Schieffelin and Vanderbilt.  Louise Vanderbilt Schieffelin Hewitt was directly descended from Commodore Vanderbilt on her mother’s side and from first Chief Justice and one-time Governor of New York John Jay on her father’s. Her marriage in 1924 to Abram Hewitt, whose ancestors included Peter Cooper and former Mayor Abram S. Hewitt, was “one of the social events of the season,” according to newspaper accounts.

After the birth of her second child, however, Louise suffered a nervous breakdown and had been receiving treatment at the Riggs Sanitarium in Stockbridge, Massachusetts. As Christmas approached, she traveled home to The Beechwood with her nurse, Beatrice Gosling, to spend the holidays with the family. On Wednesday, December 8, 1926 the Hewitts attended the theater. The following day Louise told her husband she planned to do Christmas shopping.

Tragically, when her nurse was out of the room, she threw herself from a sixth-story window to her death in the courtyard below.

When operators George Zauderer & Sons leased The Beechwood in 1930 from the Bernard J. Ludwig estate, the structure was beginning to show its age. By 1937 it was taken over by the League of American Writers who established a literary school here.

“Courses will last for ten weeks and are open to young people between the ages of 18 and 25 who have not had poetry published except in school or college magazines,” said the press announcement. 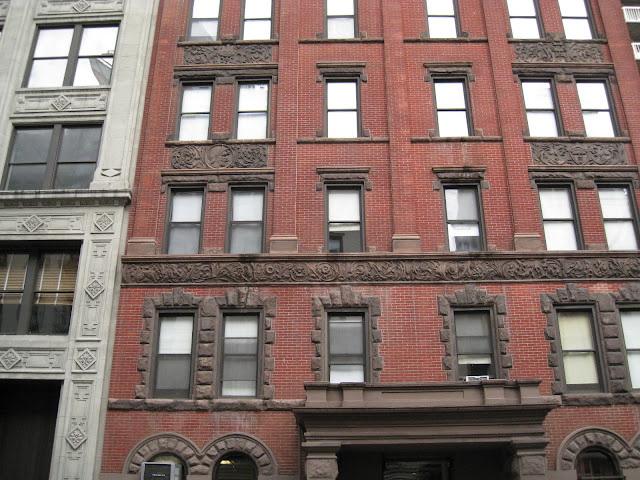 In 1951 there was a Chinese Laundry in the basement and 34 single-room occupancy rooms above. The fashionable residential hotel where names from the society pages once lived was now a flop-house.

A decade later Arthur Frommer listed The Beechwood as “a real bargain that offers singles with adjoining bath for $2.63 per night, and double rooms for $3.70, with an added bonus of a shared kitchen on each floor so you can save even more money by making your own breakfast.”

Perhaps it was a “real bargain,” but not all those who roomed here were savory.  On May 18, 1961 police staked out the lobby for resident Lawrence (Lorengo) Catanzaro. When the 37-year old entered at 1:00 am on May 19, 1961 he was disarmed and arrested for the murder of a United Parcel Service driver in a “hold-up and slaying.”

Then, in October 1980, when the future for The Beechwood looked its darkest, a group of Franciscan friars headquartered at the St. Francis of Assisi Monastery on West 31st Street purchased the building for $550,000.  With no government aid, they transformed the hotel into the St. Francis Residence. The facility provided shelter to homeless New Yorkers; what New York Magazine on December 21 of that year called “a safe, dignified environment for scores of men and women who would otherwise be walking the streets.”

In 1985 Father Thomas J. Walters explained “This is not an institution, this is a home. We have only two rules: One is no drinking in the common area and the other is don’t fight with anyone and don’t hurt yourself.”

The Home provides activities such as workshops in art, music, dance and poetry and the tenants publish their own newspaper. Field trips to the movies, ballet, museums and the countryside are available. Residents make their own decisions through a tenant’s council.

In the renovation of the building, the wonderful carved panel, THE BEECHWOOD, was lost. But the handsome building remains remarkably preserved despite its sometimes sketchy past.

photos by the author
Posted by Tom Miller at 2:45 AM