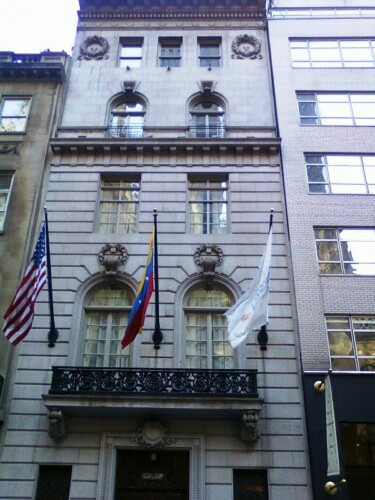 In 1904, whether John Peirce knew it or not, the exclusive mansion-filled Fifth Avenue neighborhood around St. Patrick’s Cathedral was doomed.

Four years earlier the large site of the former Roman Catholic Orphan Asylum, across 51st Street from the Cathedral and diagonally across the avenue from the mansion of George W. Vanderbilt, became available for development.  In an attempt to protect their homes from unwanted neighbors, the Vanderbilts rushed in to seize the property.  Already a syndicate represented by J. Stewart Chisholm had expressed interest in building an apartment hotel on the site.

But John Jacob Astor had already sent shock waves throughout the neighborhood when he purchased and destroyed the great brownstone mansions at the southeast corner of Fifth Avenue and 55th Street in 1901 to construct the 19-story St. Regis hotel.  The hotel signaled the beginning of the end.

Grand residences continued to be constructed for awhile, though.  Morton Plant erected his stone mansion on Orphanage land purchased from Vanderbilt and on the opposite corner, at 51st and Fifth Avenue the exclusive Union Club was built.  Between them George Vanderbilt erected two matching marble palazzi.  But it would not be enough to stop encroachment of commerce and the eventual abandonment of the area as a fashionable residential one.

While all of this was going on, John Peirce had made himself a name both in the construction industry and in New York society.  Although the key to exclusive clubs and the inner circle of society was traditionally an established family name and “old money;” the truth was that any money would do as long as one had enough of it.

Peirce’s father operated a granite quarry in Frankfort, Maine.  By the mid 1870s the younger Peirce ran the business and controlled much of the Maine granite industry.  After moving to New York in the early 1880s, he branched out into general contracting, was instrumental in the founding and construction of the subway system and supplied the granite for many of the most monumental buildings not only in New York, such as Grand Central Terminal, but along the East Coast and in Washington D.C.

By the turn of the century he was President of the John Peirce Co.; a director in the firms of William Bradley & Son., Inc.; Empire City Marble Co.; Mount Waldo Granite Works; Stoney Creek Reed Granite Co. the Interborough Rapid Transit Co.; the Interborough Construction Co. New York & Long Island Railroad Co.; and the Metropolitan Bank.   The son of a quarryman now owned a steam yacht and was a member of the Harvard Law School Association, Maine Society, New York Yacht Club, Larchmont Yacht Club, Columbia Yacht Club and the exclusive Manhattan and Metropolitan Clubs.  John Peirce had done well for himself.

Peirce purchased the lot at No. 11 East 51st Street in 1904 from Vanderbilt and commissioned architect John H. Duncan to design an imposing residence.  While other mansions in the area were being constructed of limestone or marble, Duncan was instructed to use granite.  After all, Peirce owned granite quarries.

Completed in 1906 it was an Italian Renaissance palazzo five stories tall with a modern, American basement.  The entrance, up a few steps from the sidewalk, was centered below a graceful cast iron balcony.   Sumptuous stone-wreathed keystones capped the arched windows of the second floor, echoed by two stone wreaths flanking the fifth story windows.

While Duncan’s design was prim and elegant; his proportions were questionable. Rather than relying on a single-story rusticated base, as with most of the other mansions lining the block, the architect continued the rustication for three floors before adding a cornice to support the top two smooth ashlar stories.  The result looks something like Grandpa wearing his britches too high.

Peirce and his second wife, Abby, moved in with their five grown children:  John Royden, Louise, Mary, Reginald and Alice.   Their home was flanked by the mansions of Ogden Codman and Mrs. Mary C. Kling.  The future could not have looked better.

But things were not only changing on Fifth Avenue; they were changing in John Peirce’s world as well.

Granite was little-by-little becoming less popular as a structural material.  Steel framing and concrete were replacing stone and were less expensive.   Three years after the house was completed, on Friday June 11, 1909, the New York Tribute ran a front page headline that read “Peirce Co. Receiver.  Bradley Contracting Firm in Trouble Too.”

“This abrupt change in the affairs of the Peirce and Bradley companies was unexpected,” said the Tribune, “and created a sensation in contracting circles…It was not known that either the Pierce or the Bradley concern was in financial difficulties, and surprise was expressed on all sides.”

The article noted that in 1906 the firm “had the contract for the new library, at Fifth avenue and 42d street; the Senate office building, at Washington, and the federal building at Salt Lake City.”  It mentioned that “Some of the larger contracts that had been handled by Mr. Peirce were the supplying of granite for the Brooklyn Bridge and the Washington post office and the construction of the Hall of Records, the new Custom House, the piers and anchorages of the Manhattan Bridge, and the Broad Exchange, Johnstone Empire, American Surety, Mutual Life and Bank of Commerce buildings.”

If the news “created a sensation in contracting circles,” it created an equally significant sensation in social circles.   On October 21 the following year the Tribune reported that Eugene Meyer, Jr., “a Wall Street banker” had leased the East 51st Street house from Peirce for two years at $15,000 a year.

Meyer’s lease was up in the summer of 1911.  On December 11, 1912 William Ziegler, Jr. married Gladys Virginia Watson in the St. Regis Hotel.    Zeigler was the adopted son of the now-deceased and extremely wealthy William Ziegler, a baking powder manufacturer.  He had purchased a lot from Otto H. Kahn on East 71st Street on which to build a new mansion.

In the meantime, The New York Times reported that “He has leased John Peirce’s house, at 11 East Fifty-first Street, where the couple will reside for the Winter.”

On January 14, 1914 the house was used for the last time by the Peirces.  In the presence “of the families and a few friends” Helen Peirce was married to Edward Irvine McDowell in the elegant mansion.  Four weeks later the Metropolitan Life Insurance Company instituted suit against John Peirce and his wife to foreclose the mortgage of $200,000.

On February 18, 1915 Peirce lost the property for good when The Metropolitan Life Insurance Company purchased it at foreclosure.  John Peirce’s time in the spotlight of New York society was over.

Finding a buyer for a mansion in the Cathedral neighborhood was an significant task for the insurance company.  In 1916 Morton Plant left his Fifth Avenue mansion, soon to become the home of Cartier jewelers, and William Vanderbilt’s twin marble houses were leased to art dealers Gimpel & Wildenstein.

John Peirce’s granite palazzo became home to an exclusive girl’s school.  A 1916 notice in Schribner’s Magazine announced “The Gardener School for Girls, formerly at 607 Fifth Avenue, has removed to a larger house at 11 East 51st Street. “  The house was deemed a “fireproof building with every modern equipment” with “advanced education and delightful home life.”  The principals, Miss Louise Eltinge and Miss Mary E. Masland, boasted “special musical courses” and “open air classes and gymnasium” and promised that the building would “be extensively altered.”

World War I was raging in Europe and the United States was on the brink of being thrust into it.  One of the first activities in which the girls were involved after moving into their new quarters was a benefit for the Red Cross.  In May 1916 they gave a performance of “A Midsummer’s Night’s Dream” in the Century Lyceum Theater for the charity.

A mysterious notice appeared in the New York Times on April 16, 1920 saying “The five-story residence opposite St. Patrick’s Cathedral, which John Peirce built for himself at 11 East Fifty-first Street…and later lost through foreclosure to the Metropolitan Life Insurance Company, has been purchased by a well-known New Yorker for occupancy.  It is assessed at $200,000.”

Readers who wondered who the “well-known New Yorker” was and what would become of the school had to wait until September when The Times announced that the buyers were Louise Eltinge and Mary E. Masland.  The school was secure.
The school continued producing well-educated and well-heeled young ladies.  In 1927 the girls produced a musical comedy called “May Flowers” in the ballroom of the Plaza Hotel to aid the school's College Scholarship Fund.  Unfortunately, with the end of the 1920s also came the Great Depression.

Even a school that catered to the daughters of the wealthiest families could not sustain the blow issued by the economic collapse and in 1933 the house was lost, again, to foreclosure.

In 1937 Pagano Studio bought the property.  Advertising & Selling Magazine remarked that the purchase was “to coordinate the services of its several studios” and there would be “extensive alterations.”  Those alterations were executed by architect Frank S. Parker who renovated the house to accommodate photography studios, dressing rooms and offices.

A splashy charity event was held in the studios a year later when a society “smorgasbord party” was hosted by socialites for the benefit of the Riverside Day Nursery.  The evening-long affair included dinner, tables for bridge and backgammon, dancing, music and “other diverse activities.”

The mansion was converted again in 1948; this time to offices for a single tenant.  Throughout it all the façade, on a block where mansions were either destroyed or severely altered, was never touched.

non-credited photographs taken by the author.
Posted by Tom Miller at 2:59 AM