Meares partnered with William Crawford in 1878 and the store became known as Richard Meares & Company. A year later he left the firm and Crawford brought in Scottish-born brothers Thomas and James Simpson. The Simpsons had been operating their own fancy goods shop on 8th Avenue, called T. & J. Simpson. With the new partnership came a new name: Simpson, Crawford and Simpson.

The three set out to create not merely a dry goods store, but one that would lure the most fastidious of shoppers. Renovations were done to combine the existing store with the two adjoining structures to the north. Thomas Stent was hired to essentially construct a new building using the standing framework.

The merchants filled their elegant new four-story Renaissance Revival store with luxury items aimed at the wealthy female consumers to whom price was no object. As a matter of fact, for decades Simpson, Crawford and Simpson did not affix price tags to their merchandise—doing so would be insulting as it would suggest that perhaps the customer could not afford the item.

Here the New York’s socialites shopped for gowns by Worth, for French and Belgium laces, and for imported linens. The finest of gloves, furs and hosiery were displayed for the discriminating and fabulously wealthy shopper.

The quality and cost of the wares was evident when, on April 12, 1880, fire raged through the building.  Started by a window dresser named Maloney who, in lighting a gas jet in a show window  ignited a “gauzy article of apparel,” it quickly spread to three floors. Included in the $170,000 loss was $95,000 in dress goods—about $375,000 today.

By the turn of the century, 6th Avenue would be lined by enormous, block-wide retail palaces and would become known as The Ladies’ Mile.  Simpson, Crawford & Simpson, however, would remain aloof, preferring to avoid the middle-class clientele.

With the great emporiums rising around it, Simpson-Crawford decided to expand its store to a full block width and erect a new commercial showplace. In 1899 the store commissioned William H. Hume & Son to design its new home.

On August 6 The New York Times described what was to come. “One of the largest and most architecturally elaborate department stores in the city will be the new building which is to house the business of Simpson, Crawford & Simpson,” the newspaper said.

In a thinnly-veiled reference to the other stores on the avenue, the article said “There will be none of the cheap imitation stone and carvings often used in similar buildings. The front will be of granite and limestone, elaborately carved, and the lower story polished. The most striking feature will be the large entrance in the middle of the block, with a vestibule 50 feet in width and 13 feet in depth—the largest of its kind in the city—flanked by monolith columns of polished granite and with richly carved caps and entablature.”

Living up to the press release, the building was seven stories of limestone and granite that looks disapprovingly at its more garish neighbors. The restrained Beaux Arts design reflected the conservative customers it to whom it catered.

But architectural conservatism did not rule out innovations. The first escalator (called “moving stairs”) to be installed on 6th Avenue was here, and the unusually large show windows required custom-made panes—no glassmaker in the country made plate glass produced sheets so large.

Simpson-Crawford dressed the windows with another marketing novelty, the mannequin. The paper-mache and wax figures displayed gowns and hats to ladies passing by; affording a much more realistic idea of how the items would appear when worn.

While Simpson-Crawford avoided the cast iron façade used by mammoth stores like Hugh O’Neill next door, it lavishly used the material inside. The Hecla Iron Works of Brooklyn created a show-stopping center atrium that rose seven stories to a colored-glass dome. At the top level, classical caryatids ringed the open space, staring down on the mosaic floors below.


The ladies’ parlor on the second floor was decorated in the Empire style. On the roof was an enormous dining room “with decorations of the Louis Seize period,” capable of seating 1,200 guests.  Between 12:15 and 2:15 every afternoon, ladies having lunch would enjoy the music of Nahan Franko’s orchestra. In the warm months, the dining room was transformed into an open-air palm garden.

On the 19th Street side, a carriage entrance provided access for well-heeled customers alighting from sleek black broughams, thus preventing their being jostled on the 6th Avenue sidewalk. The impressive structure cost around $1,8 million.

Before the building was completed William Crawford retired. On January 15, 1902 he sold the business to Henry Siegel, owner of the Siegel-Cooper Department Store across the avenue. As the deal neared completion, Crawford noted to the press “I wanted to make the best store in the world, and believe that I succeeded. My chief aim has been to please, and I am not disappointed at the result when I look back over the growth of my business.”  There store had 2,500 employees at the time.

As business continued to grow, William Hume designed a 10-story brick-and-stone annex behind the store in 1902.

The department store steadfastly catered to the carriage trade and in 1904 Printers’ Ink magazine made note of Simpson-Crawford’s unusual advertising policy to attract the wealthier customers. Rather than advertising in both the morning and afternoon newspapers, the store focused only on the morning papers. “A full-page appears in both the Herald and Times daily,” the magazine said, “and the copy for both is very nearly the same—rather an unusual fact in New York, where each paper has a distinct following.”

The store’s advertising manager, William H. Campbell, explained tactfully about his audience. “The Simpson-Crawford establishment is essentially high-class” and “the morning papers go into the homes of the women he wants to reach,” explained the article.  The readers of afternoon newspapers “are such a clientele as is most profitable to stores carrying popular-priced goods.”

That year the store spent $300,000 on newspaper advertising.

The store, like the others along the avenue, hired many newly-arrived immigrants as stock boys, sales girls and other untrained jobs.  On November 25, 1909 the German steamer Prince Friedrich Wilhelm arrived in New York Harbor. The 24-year old Erich Oswald Stroheim disembarked and, before he entered the Great Hall of Ellis Island, reinvented himself as the son of a German baroness and Austrian count. His name was suddenly Count Erich Oswald Hans Carl Maria von Stroheim und Nordenwall.

Stroheim, in reality, was the son of a Jewish hat maker and manufacturer.

Despite the royal pedigree he claimed, Stroheim landed a less-than-regal position wrapping Christmas packages at the Simpson-Crawford Department Store. But wrapping packages would not be the boy’s career. Erich von Stroheim went on to California to become one of the greatest directors of the silent screen era.

Henry Siegel’s widely-spread corporation of department stores collapsed in 1914. The store closed its doors in March and sat eerily quiet for three weeks while the firm was re-organized. Then on April 6 it reopened as the new Simpson Crawford Corporation brought back almost all its former employees.

The grand days of The Ladies’ Mile were over, however.  Macy’s, Lord & Taylors, B. Altman’s and others had erected modern new stores in Midtown.  Only a year after its reorganization Simpson Crawford collapsed.

By 1916 the elegant department store was converted into a mail-order warehouse and a U.S. Navy Post Office. The beautiful atrium was floored over and the sections of the building were sold to separate owners; parts becoming small manufacturing space.

In 1941 the first floor was converted to an automobile showroom. Enormous ramps were cut through the floors and a garage area installed. Two decades later Apex Technical School took over the southern-most section of the building. Today, where smartly-dressed women in white gloves shopped for gowns from Paris, young men and women learn automotive repair, air conditioning and welding.

In 2006 Cook+Fox Architects reclaimed the 8th Floor dining room, resigning it into award-winning offices and workspace. 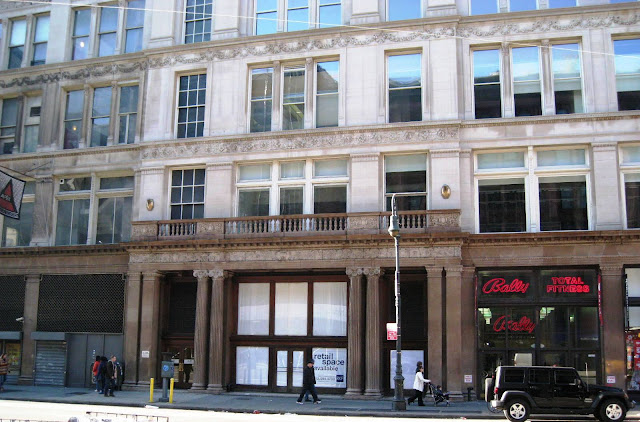 While nearly all of the grand emporiums of The Ladies’ Mile have been restored and recycled for residential or retail spaces, the most exclusive of them all still waits its turn. Despite the disfigurement inside and some unfortunate alterations on the exterior, Simpson-Crawford’s elegant stone building still prompts mental ghosts of shoppers who did not need to see price tags.

non-credited photographs taken by the author
Posted by Tom Miller at 4:03 AM