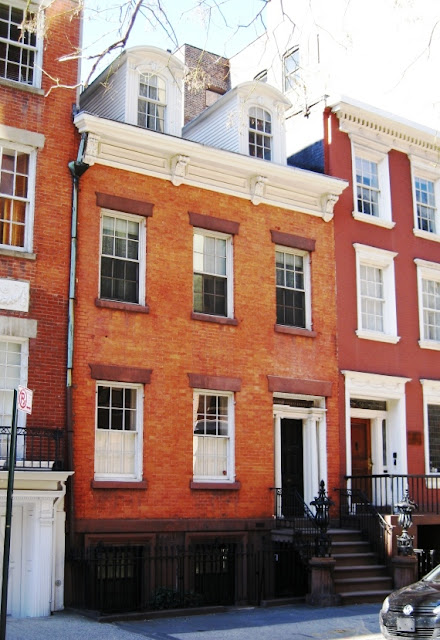 The block of West 10th Street between 5th and 6th Avenue is a time-line of architectural styles. Federal residences are interspersed among mid-Victorian row houses and early 20th Century apartment buildings. The end result is a fascinating and charming residential enclave.

Among the stand-outs is No. 56, an orange brick Federal home built in 1832 when Greenwich Village had just started developing from a sleepy rural community to a fashionable neighborhood. As New Yorkers fled the congestion and cholera of downtown, they built scores of similar homes in the tiny village of Greenwich.

Built for a well-to-do merchant-class family, the builder added special touches to enhance its simple lines and understated dignity. The wrought iron fencing protecting the English basement was capped with stylish palmettes and the elegant doorway was flanked with fluted Ionic columns and lacy leaded side lights. It was the wrought iron basket newel posts, however, that were intended to proclaim the status of the family. Perched on brownstone pedestals, the expensive ornate newels posts were capped with stylized iron pineapples – the symbol of welcome since early sailing days when returning ship captains would skewer a pineapple onto the fence post, signaling that he was home and receiving visitors.

Around the time of the Civil War the house was updated with a new cornice with ornate scrolled brackets, but otherwise the house remained as originally designed even as wealthy Victorians built wide, fashionable homes in the latest style just down the block.

The attractive home caught the eye of Oscar L. Spitzer in April of 1890. The family of Mary Bachman was living there when Spitzer knocked on the door and explained that the Fire Department was looking for land in the neighborhood for a new engine house. He lamented to the family of his unsuccessful search for a site so far, however he was very much impressed with West 10th Street as a location for the new firehouse.

He visited the family again a few days later, hinting at the possibility of a fire house being built next door or nearby. Mary Bachman, in the meantime, had discussed the matter with her lawyer only to find out the Fire Department had no intentions of building a new house.

By using the suggested decline in property value caused by an engine house next door, Spitzer was attempting to scare home owners into selling at a cheap price so he could built an apartment building. Reaction among the neighbors was strong. As The New York Times pointed out, “Some of the property owners have lived for many years in their residences and strongly object to leaving them. Therefore the feeling against Spitzer is not a mild one.”

By the turn of the century, John Alvin Young, president of the Windsor Trust Company was living at No. 56. He sold the house in December 1906 to Malvina Appleton when he moved his family to Long Island.

A year later, in August, Malvina rented the home for the winter to newlywed socialites Mr. and Mrs. Outerbridge Horsey. Horsey was a noted lawyer and his wife was the daughter of the socially-prominent Washington DC widow, Mrs. Charles Carroll Lee.

In the years during World War I and immediately thereafter, the bohemian charm of Greenwich Village drew artists and musicians. In 1923 architect Howard Major was commissioned to add a “private art studio” in the English basement.

Still a private residence, No. 56 West 10th Street is a remarkable state of preservation. Its ironwork is pristine, its architectural detailing intact. It is a stand-out on a street of remarkable buildings.

non-credited photographs were taken by the author
Posted by Tom Miller at 2:52 AM