The end of the Civil War brought an immediate boost to New York businesses. Over 35,000 miles of new railroad track was laid within only a few years and reconstruction of the South meant an inflow of cash to Northern merchants. In 1866 the Metropolitan Savings Bank decided to build a new, magnificent bank building.

The board chose architect Carl Pfeiffer to design the structure. Pfeiffer, who arrived in the United States at the age of 16, had spent his time in the West; only arriving in New York two years before this commission. With the vivid lesson of New York’s great fire of 1835 that destroyed most of the building in southern Manhattan and considering the valuable cash and paper bonds and documents that would be housed inside, Pfeiffer convinced the board that a fireproof structure was advisable.

The architect chose the latest architectural trend coming out of Paris for his new building – French Second Empire. He designed a stately four-story white marble building over a raised basement. Deep quoins at the corners drew the eye upward to the graceful slate mansard roof. Here a series of robust, arched dormers sat primly along the cornice. A steep set of stone stairs rose from the Bowery sidewalk to the rusticated, arched entranceway.

Upon the building’s completion in May of 1867, The New York Times said “This is pronounced authoritatively to be one of the finest structures from garret to basement in the City.” The fireproof construction was widely applauded. “In the construction of this building no combustible materials have been used, either externally or internally, where masonry or iron-work could be made available, rendering the same fire-proof.” 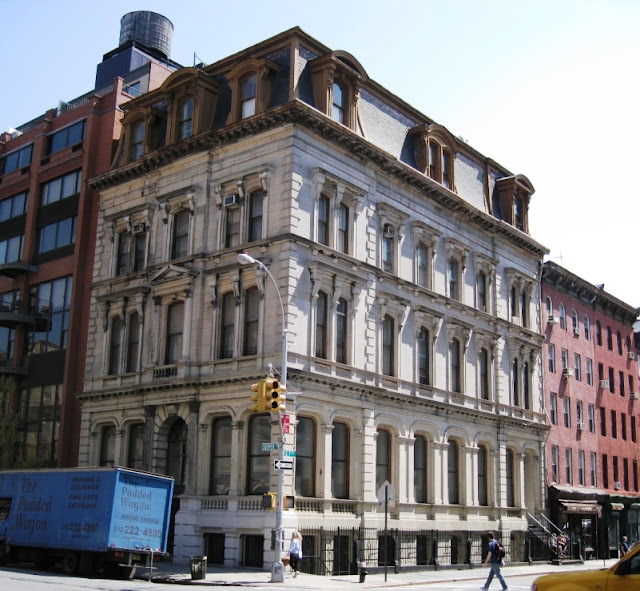 Pfeiffer used only cast iron staircases and columns and the vaulted basement ceiling was constructed entirely of iron. The Superintendent of Buildings reported to the Board of Supervisors of the City and County of New York a year later that “Were buildings constructed after the manner of the Metropolitan Savings Bank, the frequency of conflagrations, and the immense destruction of merchandise by fire and water, which have from time to time visited upon our city, would be materially lessened, if not altogether prevented. It is one of the handsomest and most thoroughly constructed buildings in the city, and is a perfect model in its precaution against fire.”

The finished building cost about $150,000. Inside, black walnut furniture was used throughout which The Times deemed “extremely simple in design, yet evincing excellent taste.”

The floors not used by the bank were leased out and, mostly due to the well-publicized fireproof construction of the building; they were filled almost immediately resulting in the building paying for itself. The Stuyvesant Safe Deposit Company took a ten year lease on the basement and sub-basement. The second floor was rented by the United States Assessor of Internal Revenue.

The brethren of the Eastern Star Lodge of Freemasons took a ten-year lease on the top floor and lavished it with their own decorations. $10,000 was spent on the ceiling frescoes alone and another $10,000 was spent elsewhere, causing The Times to say “This, it is claimed, will be one of the finest, if not the finest Masonic Hall in the United States.”

The Metropolitan Savings Bank remained here until 1935 when it moved to its new offices at 754 Broadway. The wonderful white marble building sat empty until 1937 when it was sold to the First Ukrainian Evangelical Pentecostal Church.

Now known as the First Ukrainian Assembly of God, the church remains in Carl Pfeiffer’s innovative and beautiful building. The Bowery stoop has been removed but otherwise little has changed. In examining the building in 1976 the National Register of Historic Places remarked “The interior of the Metropolitan Savings Bank Building remains remarkably intact, retaining most of its original fabric.” The original paneled doors, wainscoting and moldings are all in place.

The Register went on to say “the Metropolitan Savings Bank Building is among the most aesthetically distinctive commercial buildings to survive from the nineteenth century in New York City.”

non-credited photographs taken by the author
Posted by Tom Miller at 3:07 AM