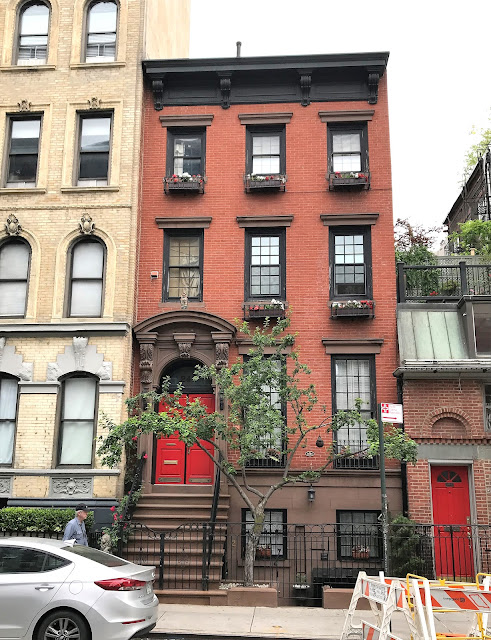 Charles Milton Mather listed his profession as "clerk," a nebulous term that ranged from a lower-paid office worker to a highly responsible employee often entrusted with large amounts of money.  The elegance of his newly-built home at 153 East 13th Street (renumbered 249 in 1868), just west of Second Avenue, suggests the latter.
Mather and his wife, Frances, had lived downtown on Henry Street prior to moving into their new home in 1863.  Three stories tall above an English basement, it was faced in warm orange brick and trimmed in brownstone.  The impressive Italianate entranceway featured double doors below an ample transom.  The arched entry was ornamented with an imposing arched pediment supported on elaborately carved foliate brackets.
The Mathers remained in the house until the early 1880's.  It was next home to the Moses Joshua Weil family.  Both he and his wife, the former Fannie Reis, were born in Germany.  The couple had six children.  The Weils attended the Fifteenth Street Temple, and Moses was highly involved in several Jewish organizations, including the Levy Lodge, No. 5 of the Free Sons of Israel of which he was treasurer.
Moses Weil became ill in the summer of 1890, and died on June 21 at the age of 54.  The Jewish Messenger said, "Until last week he had never suffered a single day's sickness, and his lamented demise was therefore a terrible shock."  The article noted that his funeral was largely attended "by friends both Jewish and Christian."
The Second Avenue neighborhood had changed by the turn of the century.  When Fannie Jurist purchased 249 East 13th Street in August 1907, it was described as a "tenement," meaning it was being operated as a rooming or boarding house.  Jurist leased it to several proprietors over the next two decades.  In 1922 it was being run by Robert and Bessie Thompson.
In September that year, Elma Fay rented a room from the Thompsons.  The 23-year-old had come from Pennsylvania in hopes of finding find a job.  The New York Herald wrote, "She had not been able to find work and the city appeared cold to her, but she determined to carry on, thinking the Thompsons would take care of her until she could find an opportunity to earn some money."  Unfortunately for Fay, the Thompsons were going through a stormy domestic period.
It came to a head on September 25 when Bessie Thompson "stormed into her room and accused her of undue intimacy with her husband and wrecking her home and hinting that she would have to leave," as reported by the New York Herald.  Elma was already depressed, and this assault was too much to handle.  She went to a nearby drug store and purchased a bottle of Lysol, a poisonous cleaning compound.
Back home, Elma poured the liquid into a glass and, meeting Bessie in the hallway, said "I am going to end it all."  Bessie strongly reprimanded the young woman, who set the glass on a hall table and rushed to her room.  Elma later told police, "soon after she had reached her room she heard screams coming from downstairs, and that she found Mrs. Thompson on the floor."  Bessie had drunk the glass of poison.
Bessie Thompson was still coherent at the hospital, where she told police she tried to kill herself "because of domestic trouble."  Elma Fay blamed her own thoughts of suicide on "a misunderstanding with Mrs. Thompson."  Bessie survived, and one might assume that Elma Fay found new lodgings soon afterward.
Fannie Jurist sold the house to Julius Maier in June 1924.  It continued to be operated as a rooming house, and in the winter of 1925 three unusual tenants took a room.  On January 21, Detectives Petrizzo and Kirly were "keeping watch on the Thirteenth Street block" for drug vendors when, according to The New York Times, they "heard sounds of a scuffle coming from a room on the third floor of 249 they hurried up there."  They burst into the room to find two 15-year-olds, Joseph Ward and Joseph Burke, "squared off, with boxing gloves on their hands."  Another boy, 14-year-old Frank Altenhein, was "acting as referee, second and ringside crowd."
The New York Times said the room was "fitted like a gymnasium, with gloves hanging on the walls, a punching bag in one corner and pictures of Jack Dempsey, Benny Leonard and other ring heroes in prominent places."  There was also a photograph of the boys "in Wild West outfits that they had had taken in a Fourteenth Street gallery."
The detectives had inadvertently found three runaways, missing since New Year's Day.  Altenhein had found $360 in a safe in the basement of his mother's Harlem home around Christmas.  He and the other two boys left home "firmly intending to head for the Rockies to become hunters."  They got as far West as Pottsville, Pennsylvania, when they changed their minds, turning back to become prizefighters in New York City.  The rented the third floor room, outfitted it for training, and purchased an Irish Terrier mascot named Beauty for $4.  The New York Times reported, "Until their money gave out on Monday night they said that they had enjoyed themselves exceedingly."
But now their adventure was over.  "None of the three seemed happy at the prospect of going back home to Harlem."  The boys were temporarily taken to the Children's Society.  The article noted, "When the detectives told them that they would have to part with 'Beauty,' the Irish terrier, Altenhein sold the dog to a reporter for a torn $1 bill."
On March 2, 1929 the basement level was opened as the Café Intro.  Many labor groups were headquartered within the East Side neighborhood, and the cafe's proprietors advertised, "Workers patronize our restaurant." 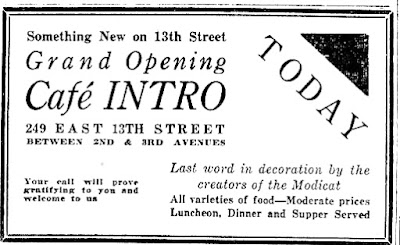 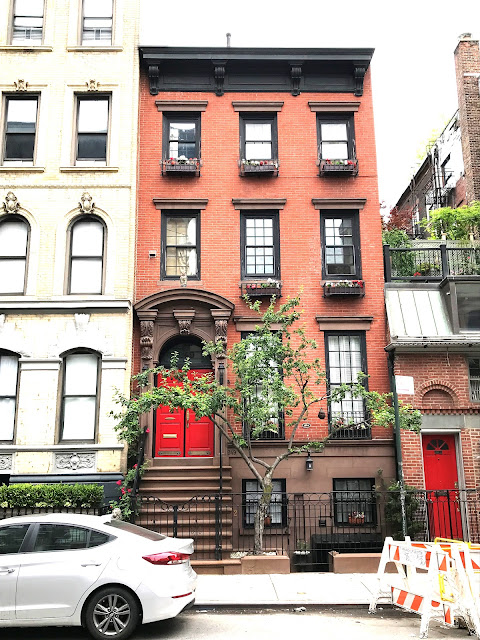 A renovation completed in 1968 resulted in two duplex apartments.  Two years later conductor Harry Saltzman, founder of the Sine Nomine Singers, purchased the house and returned it to a single family home above a basement apartment.  He was married to his wife, singer, flutist, composer and painter Barrett Cobb in a formal room on the second floor.
The couple, who still reside here, also own the former Karl Bitter and Giuseppe Moretti studio building next door at 249-1/2 East 13th Street.  Astonishingly, much of the 1864 interior elements of the Mather house survives.  A facade restoration completed around 2012 brought it nearly back to its original appearance.
photographs by the author
no permission to reuse the content of this blog has been granted to LaptrinhX.com
Posted by Tom Miller at 1:00 AM