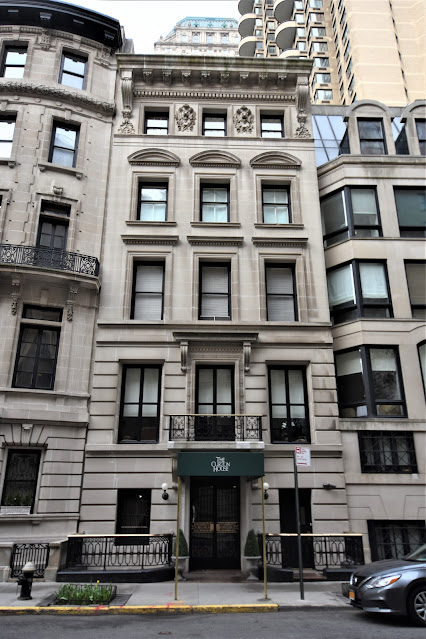 On June 8, 1881 James R. Breen and Alfred G. Nason sold their just completed brownstone house at No. 4 East 62nd Street to Henry Albertson Van Zo Post.  Breen & Nason were not only the developers, but the architects of the four-story, 27-food wide mansion.  The sumptuousness of the residence was reflecting in the sale price--the equivalent of $1.86 million today.

Born in May 1832, Post came from an old Knickerbocker family.  An engineer, the year he purchased No. 4 East 62nd Street he founded the Railroad Equipment Company, which manufactured locomotives and train cars and parts.  He was also a partner in the banking firm of Post, Martin & Co.
Post's first wife had died in 1860 and he was now married to the former Caroline Burnet McLean.  He had two daughters from his first marriage, and six more children with Caroline (one, Maud Evelyn, died in infancy).  One more child, Henry Burnet Post, would be born in 1885.
Son Edwin Main Post was 22-years-old in 1892 when The Sun announced, "A very pretty wedding to occur at the very opening of the month of roses will be at Tuxedo Park, when Miss Emily Bruce Price and Mr. Edwin Main Post will be married."   The ceremony took place in the Price's summer residence.  Two of Manhattan's wealthiest young bachelors were among Edwin's ushers, Gordon Norrie and Theodore A. Havemeyer.  The bride would go on to become an nationally recognized authority on etiquette as Emily Post.
Caroline was actively involved in the Suffragist Movement and on April 24, 1894 she hosted a "parlor meeting" in the 62nd Street house.  Her guest speaker was Harriet Stanton Blanche, the daughter of Elizabeth Cady Stanton.   In her comments that afternoon she said, "These Brooklyn ladies who are protesting against woman suffrage must be dreaming."
The parlor was the setting of daughter Caroline Beatrice's wedding to Regis Henri Post the following year, on March 5.  The couple were distant cousins.   Regis Post entered politics and they would live for years in Puerto Rico after President Theodore Roosevelt first appointed him Auditor of Puerto Rico and later Governor.
On March 20, 1897 The Record & Guide reported that Henry A. V. Post sold "the valuable four-story stone front dwelling" to William Augustus Read.  It was indeed valuable, The New York Times placing the sale price "at between $90,000 and $100,000."  The lower amount would be equal to about $2.86 million today, nearly double what Post had originally paid.
Before moving in Read commissioned the architectural firm of Clinton & Russell to completely remodel the house.  The stoop and front were removed, and a gleaming limestone façade replaced the outdated brownstone.  Designed in the neo-Italian
Renaissance style, the sedate design featured arched pediments over the fourth floor windows and massive carved lions' heads between the top floor openings.  French doors at
second floor opened onto an iron-railed balcony. 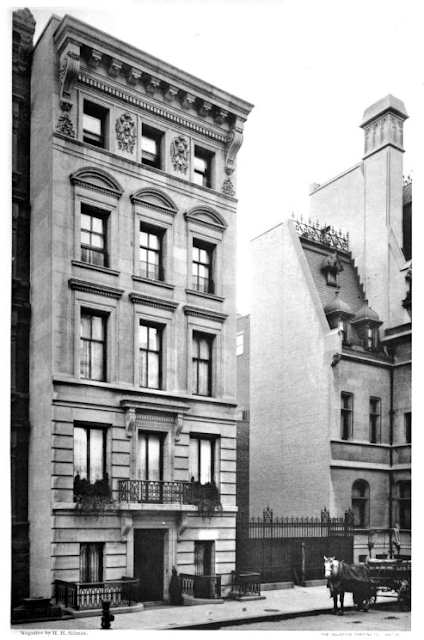 American Architect & Building News, June 2, 1900 (copyright expired)
A banker, Read was a partner in Vermilye & Co. at the time.  Born on May 20, 1858, like Henry Post he came from an old American family, his ancestor William Read arriving in Massachusetts in 1635.
Read's wife, the former Caroline Hicks Seaman, also had deep American roots and was a member of the National Society of Colonial Dames.  When the couple moved in they a one-year old, Duncan Hickshad, and twin toddler boys, William Jr. and Curtis Seaman.   Shortly after moving in another son, Russell Bartow, was born.  He arrived in 1898 and was quickly followed by Caroline Hicks the in 1899. 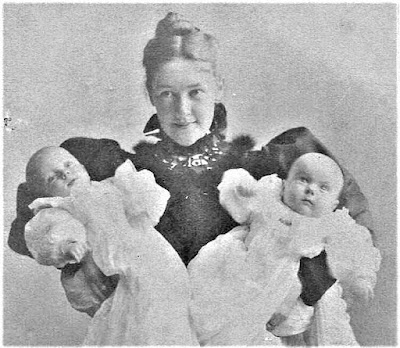 Caroline Read with her twins in 1895.  original source unknown
The Read family kept expanding.  Bancroft was born in 1901, but tragically died in infancy, followed by Bayard Whitney in 1902, Mary Elizabeth 1904,  and Kenneth Bancroft in 1906.  Sadly, Kenneth died the same year.
The mansion's library was filled with Read's exceptional collection.  A long-time member of the Grolier Club, American Biography said he was "well known as a discriminating collector of manuscripts, rare editions of books and fine bindings, and he possessed a library of unusual value, both by reason of the character of the books and manuscripts, and the artistic beauty of the bindings in which they were preserved."
The family's country estate, Hill Crest, was in Purchase, New York.  They, nevertheless, spent time in other fashionable summer resorts.  In 1900, for instance, they leased the Kneeland Cottage in Lenox, Massachusetts.
In 1904, after being with Vermilye & Company for nearly three decades, Read founded the banking firm of William A. Read & Co.  The firm specialized in bonds, American Biography noting that Read "had a rare knowledge of the values of securities and his advice was sought by many individual and corporate investors."
The number of Read children belied the fact that wealthy couples slept in separate rooms.  It was a situation that tested Caroline's mettle in the early morning hours of February 14, 1907.  At around 1:00 she was awakened by a noise and called out, "Is that you, Will?"  Getting no answer she got out of bed and opened the bathroom door.  The New York Times reported, "For a moment she was able to see nothing.  Then gradually she made out the form of a man clinging to the upper frame of the window."
A more faint-hearted woman might have screamed, or even fainted.  But Caroline was irately offended.  "What do you want?" she demanded.  The intruder said, "I'm just looking for a place to sleep and something to eat."
Caroline walked directly to the burglar alarm in her bedroom and pulled the switch, and then went to William's room.  By then the would-be burglar had made his escape.  Before long East 62nd Street was teeming with police.  The feisty socialite had prevented a burglary, although the perpetrator was never found.
Nevertheless, William apparently did not take the close call lightly.   Less than two months later, on April 10, The City Record said he had applied for the appointment of "Mr. Ohlson as a Special Patrolman, with permission to carry a pistol."
William A. Read fell ill on March 27, 1916 and died in the 62nd Street mansion a week later, on April 7.   Caroline and the unmarried children continued to live in the mansion.
With the outbreak of World War I Caroline's four sons enlisted in the United States Navy's aviation service.  In 1918 Curtis and Russell Bartow were in France, Duncan was a flight instructor in the Government's aviation school in Florida, and William was training at the Boston Tech Flying School.
On March 1, 1918 the New-York Tribune reported, "When the authorities at Washington learn the truth, Mrs. William Augustus Read, of 4 East Sixty-second Street, will then learn whether or not her son, Ensign Curtis F. Read, of Yale, '17, lies buried in France or is still flying with the United States naval aviation forces in foreign water."  The confusion was not cleared up until May when Brooklyn Life reported that Curtis had been killed "in an air flight near the Belgian coast."  The article noted, "The service flag which flies over the door of Mrs. Read's residence...carries stars for three more sons--all in aviation work."
Daughter Caroline Hicks Read was active in "canteen work" during the war.  That was possibly how she met Navy aviator Lt. Archibald G. McIlwaine II.  Caroline's introduction to society occurred in the 1919-1920 winter season, and was quickly followed by her mother's announcing the couple's engagement on March 22, 1920.
Russell Bartow Read, now a doctor, was married to socialite and "Junior Leaguer" Hope Williams the following year.  The newlyweds lived at No. 4 East 62nd with Caroline.   In 1927 Hope did what was the unthinkable among the high society set--she tried her hand at acting.  And she was a hit.  The Daily News said "she made her Broadway debut in support of Madge Kennedy in 'Paris Bound,' and won such high praise she was immediately scheduled for stardom." 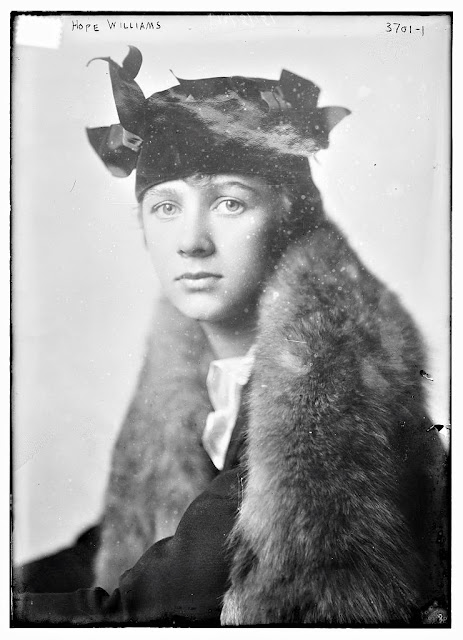 Hope Williams, from the collection of the Library of Congress.
Success on the stage did not translate to harmony at home.  On December 8, 1928 the Daily News reported, "The Rialto has become the dividing line in another society romance."  The article noted after Hope achieved theatrical fame, "Matrimony rapidly faded into the background."  Only months after first stepping foot on the stage, Hope obtained a divorce.
Caroline Read entered the Presbyterian Hospital in the spring of 1929 for an operation.  She died there on May 1 at the age of 60.   The mansion was combined internally with No. 6 East 62nd Street in 1931 by architect John Hamlin for the York Club.  The renovations, completed in 1932, resulted in what the Department of Buildings deemed a "residence club with sleeping accommodations."  It noted that the properties were "separate buildings under the same ownership." 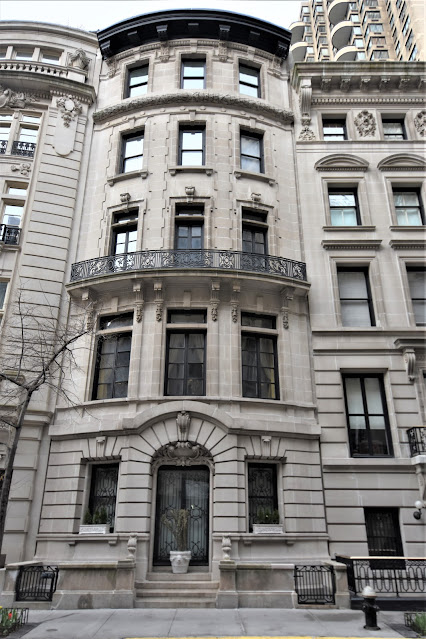 6 East 62nd Street.
The club was the scene of weddings, dinners and social events throughout the coming decades.  On November 24, 1940, for instance, The New York Times reported on the coming "tea dance to be given Dec. 2 at the York Club...in aid of the British-American Ambulance Corps."  And on June 20, 1948 the newspaper announced, "The Herb Society of America, with headquarters at the York Club, 4 East Sixty-second Street, will hold its annual meeting tomorrow."
In 1985 the combined houses were converted to sprawling duplex apartments known as Curzon House.  A two-bedroom apartment in 1991 rented for $8,500 per month--more in the neighborhood of $16,000 today.   Outwardly, little has changed to either mansion.
photographs by the author
LaptrinhX.com has no authorization to reuse the content of this blog
Posted by Tom Miller at 1:16 AM