The Stonewall Inn -- 51 and 53 Christopher Street 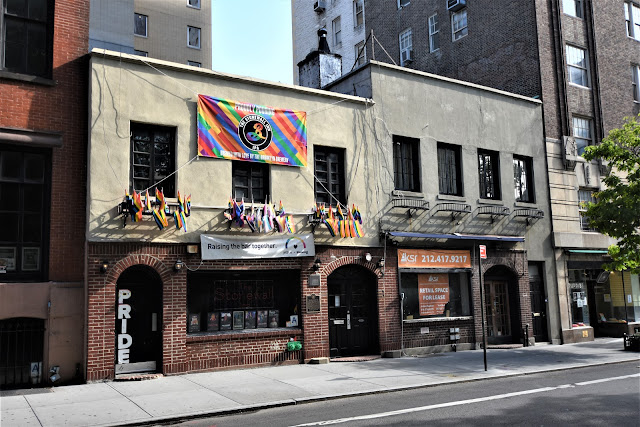 In 1843 A. Voorhis erected a two-story, brick-faced livery stable at No. 51 Christopher Street.  Four bays wide, it closely followed the accepted stable configuration with a large carriage bay flanked by a pedestrian doorway and a window.  Three years later Mark Spencer, whose impressive home was nearby at the corner of West 4th Street and West 10th Street, built his private two-story stable next door at No. 53.

By 1851 the proprietor of the Jefferson Stables was leasing both buildings.  An advertisement in the New York Herald on October 21 that year offered "Horse For Sale--A gray horse, just from the country; is eight years old, fifteen hands high, and sold for want of use.  Can be seen at Jefferson stables, No. 51 and 53 Christopher street, near Fourth."

The arrangement did not last especially long.  When S. A. Knopp advertised his "splendid pair of light cream colored horses, with silver manes and tails" for sale in 1856, the Jefferson Stable occupied only No. 51 Christopher Street.

In November 1886 William Haxton, who owned several other properties in the neighborhood, purchased No. 51 from Alice Vose.  His estate enlarged the building in 1898.  Architect Jacob V. Myers filed plans for a new roof and "walls carried up."  The renovations, costing about $38,200 in today's money, resulted in a three-story structure.


William Haxton's daughter, Myrna, bought out her siblings' shares in the ownership of No. 51 in 1907.  She had married publisher Henry Sleeper Harper, partner in Harper & Brothers, in 1889.  She updated the stable that year, hiring architect Peter Roberts to install a skylight, new stalls, and change the ceilings.

Meanwhile, the stable next door had been owned by Philetus H. Holt for years.  Following his death in 1875 title was transferred to his son, Robert S. Holt.  In 1906 he sold it to Maria Habermann.  She retained ownership until July 1911 when she sold it to James J. Roddy, "who will make alterations," according to the Evening Telegram.  It was the end of the line for No. 53 as a stable.  On August 19 the Record & Guide reported that "James Roddy, general contractor, has moved his office from 9 East 8th st to 53 Christopher st."

An even greater change came after Roddy sold the building to Anthony Barlet in 1913.  On July 19 that year the Record & Guide announced he had leased it to to tenant "who will occupy is as a wholesale French bakery.  Extensive alterations will be made to adapt it to the business."


In 1930 the former Jefferson Livery Stables was reduced to two stories and joined internally with No. 53 by architect William Bayard Willis.  The French Bakery now engulfed the ground floor of both structures.  A single apartment was on the second floor.


By 1934 the bakery was replaced a restaurant, Bonnie's Stonewall Inn.  Architect Harry Yarish gave the first floor a neo-Colonial brick facade with arched doorways and a shallow columned portico at No. 53.  The upper floors were stuccoed. The "back room" in No. 51 was a popular spot for groups.  On March 25, 1938, for instance, The Richmond Hill Record announced "Members of the Richmond Hill Council 1625, Royal Arcaneum, and their guests will dine and dance at 8:30 tomorrow night at the Stonewall Inn, 53 Christopher Street, Manhattan."

Prohibition ended in 1933 and so New Year's Eve celebrations that year were eagerly anticipated.  The New York Sun reported that the prix fixe cost at the Stonewall Inn would be $6.50 per person, or about $115 today.

Everyday dining was much more affordable.  In 1939 the Stonewall Inn advertised "lunch from 50 cents, dinner from 75 cents."  The cost of the least expensive dinner would be about $13.70 today.

The Stonewall Inn was a popular eating place for decades.  On December 15, 1962 an advertisement touted:

The Weekly People was a New York City-based weekly Socialist Labor Party newspaper.  The evening was open to everyone, with tickets costing $4.50 for adults $3.00 for children.

In 1966 the restaurant closed.  Gangsters affiliated with the Genovese family converted the space to a gay bar.  Among the renovations was the removal of the portico.  Gay bars were illegal and for protection and privacy the owners painted the windows black and installed plywood inserts inside.  The wooden doors were reinforced with steel doors on the inner side to slow down police.  The club opened, keeping the name of the Stonewall Inn, in March 1967.

The New York State Liquor Authority forbade the serving of alcohol to disorderly persons.  Homosexuals were defined as disorderly and, therefore, it was illegal to serve admitted gays.   Patrons suspected of being homosexual could be legally evicted or ordered to face forward at the bar to prevent them from making eye contact with other patrons.

To circumvent the liquor law, the bar held a social club license.  Presumably members brought their own liquor.  The truth was that customers paid high prices for watered-down whiskey and black market beer.  As was the case with Prohibition speakeasies, customers knocked on the door to be checked out through a tiny window by an attendant.  If admitted, they paid a cover fee and signed in (normally using false names, of course).

The main barroom was in No. 51.  There was dancing (also against the law) both here and in "the backroom."  Historians agree that it continued to operate because regular bribes were paid to the Sixth Precinct.  Nevertheless, raids were made for appearance's sake, with advance notice given to the owners so that liquor and money could be removed beforehand.

Each year in New York City around 500 persons were arrested "for the crime against nature," and 3,000 to 5,000 gays were arrested for loitering or solicitation.

On Friday June 27, 1969 plainclothes police and detectives were sent to the Stonewall Inn to confiscate cases of liquor.  According to Deputy Inspector Seymour Pines at the time, the bar was operating without a liquor license.  The 200 patrons who were expelled from the bar saw it differently--it was police harassment.

Whatever the case, within an hour the number grew to around 400 angry gay men who fought the police in what was the beginning of the Gay Rights Movement.  Four policemen were injured and thirteen civilians arrested that night; however the raids and the protests continued for weeks.  The Daily News described the protesters as having "all the fury of a gay atomic bomb."

By the following evening the battered facade of the Stonewall Inn was graffiti-covered with messages reading "Support Gay Power," "Legalize Gay Bars and lick the Problem," and "GAY PROHIBITION CORRUPT$ COP$ FEED$ MAFIA."

The Stonewall Inn limped along for four months before closing in October 1969.  The sudden notoriety and the inability to obtain a liquor license were too much to overcome.  The two buildings were again separated.

The 1970's and early '80's saw Bagel And...in No. 51.  The dingy interior of the old Stonewall Inn was gone.  The New York Times food critic Mimi Sheraton described the shop on August 31, 1976, saying its wood paneling "has a high-quality finish...Wood columns with a sprayed effect, reflected in diamond-shaped mirrors, take on the effect of a never-ending abstract forest."  The owners of Bagel And...widened the store entrance to match the one next door.

In the meantime No. 53 was home to Bowl & Board, and then to the Szechuan Cottage Restaurant around 1982.  And then in 1993 the third Stonewall opened in No. 53.  Renovations were made and for several years it enjoyed popularity, but closed in 2006.  The space was renovated in January the following year for the Stonewall Inn, a gay bar which survives. 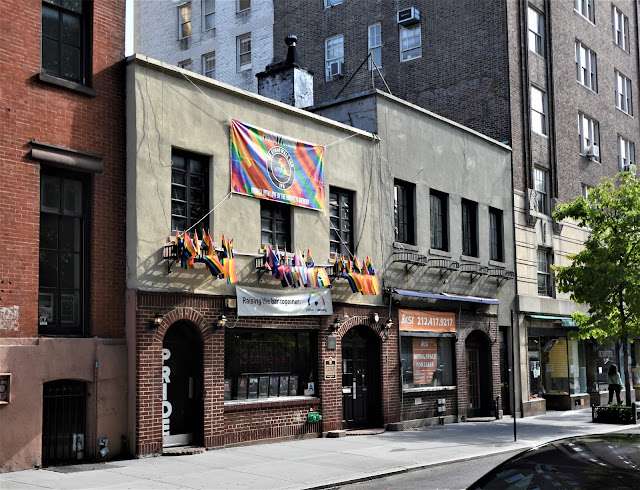 On June 23, 2015 the buildings were designated a New York City landmark.  In its designation report the Landmarks Preservation Commission noted "While the struggle to secure LGBT civil rights certainly did not begin at the Stonewall Inn, the legacy of Stonewall as the inspiration for the Gay Liberation Movement and Gay Pride events has been well established."

photographs by the author
Posted by Tom Miller at 1:21 AM