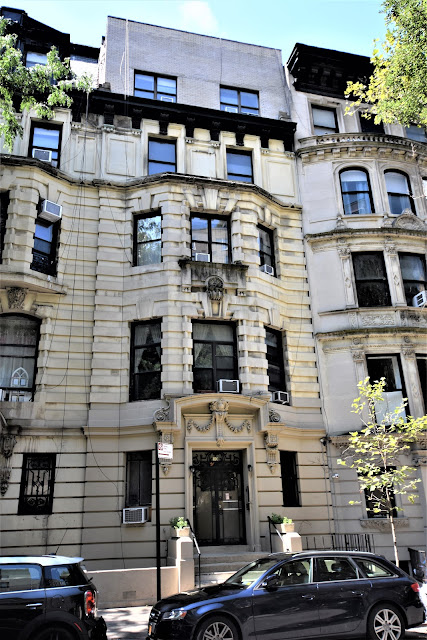 Completed in 1900, the opulent Beaux Arts style homes shared elements--the seamless flow of the rustication of the first three floors, for instance--while steadfastly maintaining their own personalities.  Each was 25-feet wide and five stories tall above the basement level and faced in limestone.

A short stoop led to the French-grilled doors of No. 10.  The entrance sat below a prominent hood with carved swags.  The fourth floor sat back from the angled facade of the lower floors, and the fifth took the shape of a high mansard.

Luyster sold No. 10 on April 12, 1900 to Frederick Hewitt Parks and his wife, Arabella.  The New-York Tribune reported the price at $82,000--about $2.53 million today.  As was customary with well-to-do families, the title to the property was put in Arabella's name.

Parks was first vice-president of the massive International Paper Company.  When it was incorporated on January 29, 1898 it acquired "almost all of the important mills which manufacture news paper in the Eastern States," according to the New-York Tribune.  By now it had added properties--paper and pulp mills, woodlands, and such--throughout the Eastern and New England States.

The couple had a daughter, Florence Louise.  A year after moving in, on November 22, 1901, the Florence's parents announced her engagement to Frank Ray Kimberly.

The family's summer home was at Glen Falls, New York, where Frederick engaged in his passion for race horses.  In the fall of 1901 he bought a young trotting gelding named Major Delmar from the William E. Spier estate for $2,950.  The New-York Tribune later wrote "he developed Major Delmar, the two-minute trotting gelding.  The next season he took over $23,000 in purses on the Grand Circuit."  Parks made a substantial profit on the horse when he sold it to E. E. Smathers for $40,000--a startling $1.23 million today.

During the winter seasons Arabella was active in West Side society, hosting, for example, an evening reception on February 8, 1903.  She apparently kept active, as well, and was a member of the Roller Skating Club.

In the fall of 1905 Frederick fell ill and was diagnosed with Bright's Disease, a serious kidney condition known as acute nephritis today.  He and Arabella spent that winter in California, but while there his condition worsened--so much so, in fact, that they returned home on a special train in May 1906.  The couple were home only a few days before Frederick Parks died in the 76th Street house just before midnight on May 25.

Arabella remained in the 18-room house until December 1908 when she sold it to the widowed Estelle Blumenthal.  After two decades here she sold the house in May 1929 for the equivalent of $1.47 million today.

By 1940 No. 10 was owned by the Rev. Frederick J. Toomey.  He used the house not only as his residence, but as the headquarters of the Catholic Boys Brigade of the United States.  Founded in England and Ireland in 1896, the goal of the Catholic Boys' Brigade was to steer boys away from idleness and crime by providing after-school activities and discipline.

The 76th Street house was used for the national administration functions of the group while the local hands-on work with the boys was conducted at No. 316 West 85th Street.  It was a significant organization.  In reporting on the election of officers here on March 6, 1940, The New York Times noted "The Catholic Boys Brigade has a membership of more than 40,000 boys between the ages of 12 and 16."

On April 13, 1944 The New York Times reported that Rev. Frederick J. Toomey had sold No. 10 to Ferdinand Muller, "who will occupy it as his home."  Muller made renovations and when he sold the house two years later it was described by The New York Times as "containing a duplex and a triplex apartment."

The buyer Mrs. Margaret H. Le Boutiller seems to have returned it to a single-family home.  When she divorced her husband, Bronson Williams, the courts allowed her to retake her maiden name.

The divorcee's life was not romance-free.  On May 15, 1949 The New York Times reported "Announcement has been made of the secret marriage of Mrs. Margaret H. Le Boutillier of 10 West Seventy-sixth Street...to Joseph Norman Kearny of Ridgewood, N. J."  Kearney was an architect and aircraft engineer, president of the Kearney Development Company.

In July a small group of investors headed by Minnie Small purchased No. 10.  The Times reported they "plan to remodel the building into small apartments."  The conversion, completed in 1955, resulted in a doctor's office in the basement and three apartments per floor above.  It was most likely at this time that the mansard level was brutally remodeled into a grotesque blank-faced bunker. Other than that disfigurement, the Parks house survives mostly intact on the exterior--a reminder of when this block steps from Central Park was home to some of the city's wealthy citizens.

photographs by the author
Posted by Tom Miller at 1:50 AM