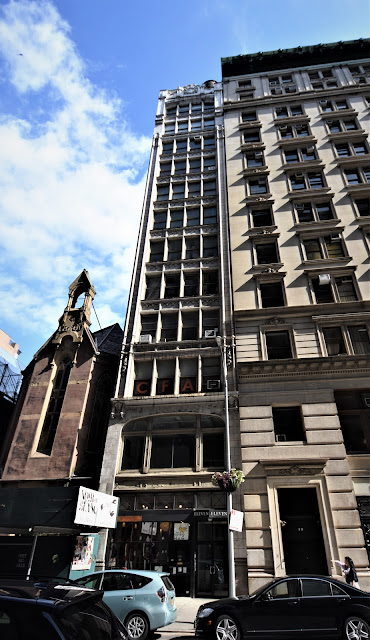 The 25-foot wide, four-story brownstone house at No. 11 West 25th Street was built in a prestigious location.  Steps away from Fifth Avenue and Madison Square, it was next door to the fashionable Trinity Chapel where some of Manhattan's wealthiest families worshiped.   But by end of the 19th century the neighborhood had mostly ceded to commerce as millionaires migrated north.

On August 3, 1912 the Real Estate Record & Builders' Guide reported that Benjamin Barnett had purchased the property.  "Mr. Barnett will erect a loft building on the site."  Barnett and other investors formed The 11 West 25th St. Co. and within the week of buying No. 11 took out a $135,000 building loan--a significant $3.61 million today.

The developers wasted no time.  The architectural firm of Gross & Kleinberger was hired to design a 12-story loft and store building and on August 17--just two weeks after the purchase of the property--plans were filed.

On September 8, 1912 The New York Times reported "One of the latest additions to the many tall lofts now in course of construction in the mid-town zone is a twelve-story structure, now well under-way at 11 West Twenty-fifth Street...It will be of fireproof construction throughout, with a facade of enameled terra cotta."


On June 21, 1913, as construction was nearing completion on No. 11, the Record & Guide commented on the flurry of development along the block.  In an article entitled "West 25th Street / Loft Buildings Displacing More Private Dwellings There," it detailed eight buildings under construction, mentioning that "At 11 West 25th street plastering and interior equipment is being installed."

At the time terra cotta clad commercial buildings in the neo-Gothic style were rising throughout Manhattan; the most notable being Cass Gilbert's masterful Woolworth Building under construction downtown.  Gross & Kleinberger followed suit, embellishing No. 11 with shields, crockets and other Gothic elements. 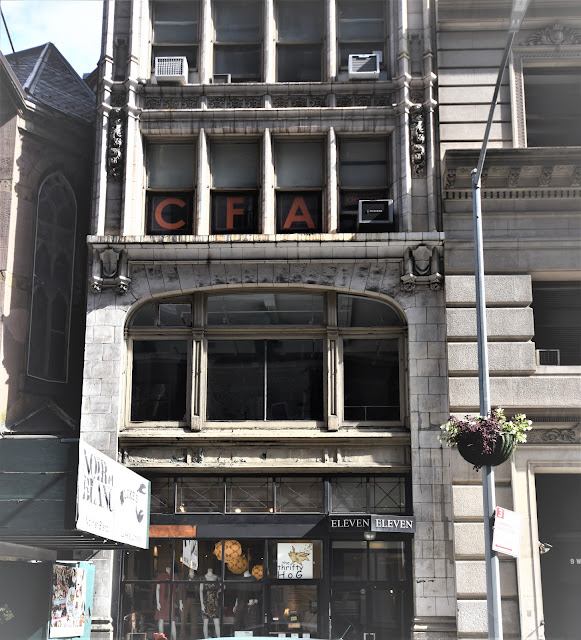 Construction was completed in the summer of 1913 and tenants were signing leases by August.  Among the first was the Singer Sewing Machine Company which took the ground floor store and basement level.

Interestingly, both offices and factories shared the upper floors.  Apparel firms like H. I. Cohen,  the Madison Carnet Company and John O. Powers took floors.  H. I. Cohen, who leased the 7th floor, hit the ground running.  He ran two wants ads in The New York Times on November 29, 1913.  One read "Jobber wants Spring samples of silk waists; also contractors wanted to take out work," and the other "Jobber looking at Spring skirts from $2 to $7.50."

Another initial tenant involved in the garment trade was Joseph A. Herzberg, maker of women's dresses.  He had serious problems in 1914, but they were not associated with his business.  Herzberg and his wife had been married in 1888, but lately their relationship had soured.  He moved out of their home when, according to him, "she threatened to pour kerosene over the bedclothing and set fire to the bed while he was asleep."

On October 20, 1914 The Sun reported that he told a judge "that once in the Fifth Avenue Building his wife hit him with her fist and cut his face with her rings and on another occasion she chased him out of his office at 11 West Twenty-fifth street, threatening to shoot him."  On that occasion, as Herzberg ran down the block in terror, his wife shouted "Stop, thief!  Murder!  Police!"  Herzberg filed for separation on the grounds that his wife "treated him so cruelly that it is unsafe for him to live with her."

In the meantime other spaces were leased to apparel and millinery firms like F. A. Harris Co.  On March 1914 it was looking for "Milliners and preparers; first-class operators only."  Other firms in the building at the time were the Ascot Manufacturing Co., and Kasse & Goldberg, makers of cloaks and suits.

At the time the high-end retailers along Fifth Avenue above 32nd Street were battling the encroachment of loft buildings along the side streets.  The hundreds of factory and shop workers mobbed the sidewalks and spilled onto upscale Fifth Avenue.  Refined shoppers were loathe to battle the hoards of workmen and the fashionable tone of the avenue was threatened.  The Save New York Movement was born.


The Movement established a “restricted zone” and encouraged manufacturers to avoid it.  The mayor supported the program and initiated zoning restrictions for construction going forward from 32nd Street to 59th Street, from Third to Seventh Avenue.   The pressure convinced fur manufacturers Friedman, Schindler & Co. to move into No. 11 in 1916.  On the same day that The Evening Post reported that the firm had signed a lease, The Save New York Commission applauded the move in print.

Celluloid had been patented in 1869 but its use for making jewelry became highly popular in the 1920's.  Among the tenants of No. 11 in 1922 was A. Reinheimer & Co. which made celluloid buckles and buttons in its 7th floor factory.  On the afternoon of July 27 a fire broke out while most of the firm's 100 employees were at lunch.

A pedestrian was nearly hit by a shower of glass from a window, blown out by the heat.  He turned in a fire alarm, but by the time the fire fighters arrived the blaze had spread to the sixth floor, occupied by dress makers Hahn & Benjamin, and to the eighth, where embroider company Robert David, and furriers Harris & Victor leased space.  The mostly female workers in the building scrambled to escape.  The New-York Tribune reported "Some of them were carried down by elevators, others went down fire escapes at the rear of the building and about 150 ran to the roof and made their way across the Townsend Building, at the Broadway corner."

Although the blaze was extinguished within 20 minutes, it did considerable damage.  The 7th floor was essentially gutted and the 6th and 8th were heavily damaged.  The total loss was estimated at $50,000 (just under $750,000 in today's dollars).  And if the loss of its factory was not enough, A. Reinheimer & Co. was soon hit with a summons from the Fire Department which charged the firm "with unlawfully having celluloid in its premises without a permit." 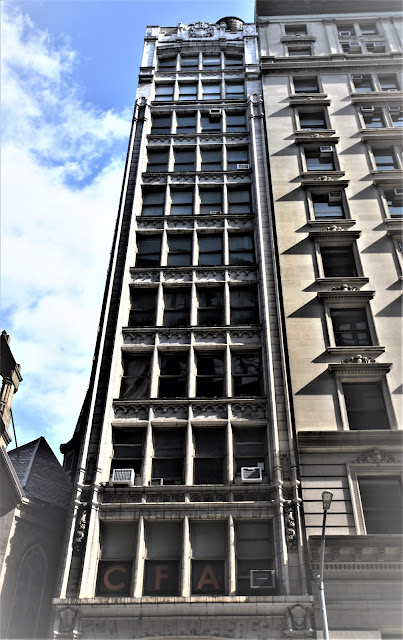 Even as the Garment District moved northward above 34th Street, No. 11 continued to lease to apparel and millinery firms.  Enterprise Accessories, Inc. was here in the early 1930's.  In 1934 it was embroiled in labor conflict with the International Pocketbook Workers Union, which fought for higher wages for its members.  Enterprise Accessories, Inc. decided simply to move its operation to Greenfield, Massachusetts, where wages were cheaper.  But with the nation in the throes of the Great Depression, the National Recovery Administration stepped in.

On August 27, 1934 The New York Times reported "The first move under the NRA to prevent employers from moving their plants from this city to communities with lower work and wage standards and to escape higher union obligations was announced yesterday by the Regional Labor Board."  A representative of the Labor Board stressed, "if this firm is allowed with impunity to lock out its union members and to remove to another place for the purpose of obtaining cheap labor there will be an exodus of such firms from New York."

Other apparel firms in the building in the 1930's and '40's were the Beauty Brassiere Company (makers of "brassieres, bandeaux, and corsets"), the Lace Process Corporation, and Hexter Millinery.  World War II brought extra business to the Fisher-Mair Uniform Company.  But the firm's greed brought not only unwanted publicity but Government action.

Enlisted men were issued uniforms at no cost by the military; however many purchased additional uniforms from retailers like Fisher-Mair.  In the summer of 1944 sailors complained to the Office of Price Administration that they were being charged $45 for uniforms that should cost $28.  Werner Ilsen, the regional enforcement executive, investigated and disclosed "The overcharges were for Navy 'blues'--woolen blouses and pants--and for 'skivvies,' a cotton basque-type undershirt."  Fisher-Mair Uniform Company was sued by the Office of Price Administration for violating ceiling prices and for "having failed to keep proper records."

The second half of the 20th century saw the neighborhood changing once again.  By 1966 the offices of the Lift Extension Institute were here.  Formed in 1913, the philanthropic institution has a goal "of prolonging human life through hygiene and disease prevention."  Over the years its officers had included William Howard Taft, Alexander Graham Bell, William James Mayo and Russell Henry Chittenden.

No. 11 was home to the Capricorn Gallery by 1968.   That year in November a benefit exhibition and sale of original costumes and scenic designs and posters of the City Center of Music and Drama was held here.

In 1984 the advertising agency of J. J. Gross & Company was in the building, and by the late 1990's Haas Company occupied the store level.  On September 24, 1997 The New York Times' food columnist Florence Fabricant wrote "A little-known source for baking equipment at low prices is the Haas Company."  The described the firm as "Mainly a wholesaler that sells just about everything for professional kitchens, from whisks to Traulsen refrigerators."

At the time Frenchway Travel Agency occupied offices on the eighth floor.  The all-female firm specialized in getting the fashion industry to exotic spots for photo shoots and such. 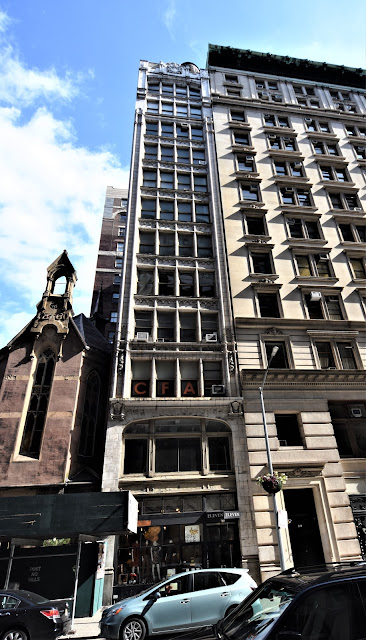 Gross & Kleinberger's Edwardian Gothic building has survived more than a century with almost no change--unlike the Nomad neighborhood in which it sits.