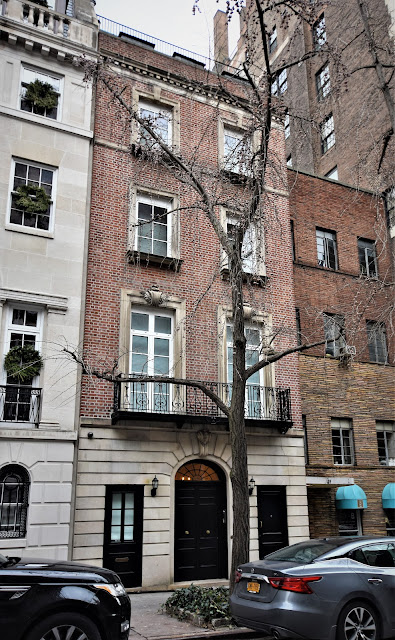 In the first years of the 20th century the three-story brownstone at No. 127 East 80th Street, between Park and Lexington Avenues, was home to Alfred and Sophie Wagner.  On December 23, 1911, after the couple sold the architecturally out-of-date residence to Allen Wardell, The New York Times commented that he "will alter and occupy the house."


Wardell's father, William T. Wardwell, had died the previous January.  He had been for years the treasurer of the Standard Oil Company.  Allen had graduated from Yale University in 1895, and then from the Harvard Law School.  He and his wife, the former Helen Rogers, were married in 1903 and had two children, Edward and Clarissa.

If, indeed, the Wardwells initially intended to remodel the 20-foot wide Victorian house, they quickly changed course.  On April 20, 1912 The Real Estate Record & Builders' Guide reported that Delano & Aldrich had filed plans for a new five-story residence to cost $25,000--in the neighborhood of $652,000 today.   Allen Wardwell and William Adams Delano may have already known one another; they were in the Yale graduating class.

The family moved into a rather austere brick-faced house.  The architects gave the facade nearly no decoration.  The centered entrance wore a Georgian-style fanlight, an iron balcony fronted the two second story windows, and two decorative half-round balconettes sprouted from the fourth floor openings.   A severe brick parapet took the place of a cornice and provided privacy to the terrace of the mansard level.  Inside were 17 rooms and five baths.

Aside from his legal practice, Allen Wardwell was highly involved in social programs.  He was treasurer of the Legal Aid Society, the mission of which was to provide legal assistance to those unable to afford it; and was president of the Red Cross Hospital on Central Park West at 100th Street.  In October 1915 he petitioned to have the name of the hospital changed to the Park Hospital, saying the change would give the facility "a wider scope and permit it to accomplish more good."

His involvement with the Red Cross intensified following the Russian Revolution and the United States's entering World War I.  With the rank of major he headed the Red Cross Mission to Russia in 1917, traveling to Moscow to help free hopeful emigrants.  On December 26, 1918 The New York Times described the nation as "starving, disrupted Russia, where food is denied to persons not regarded as 'class-conscious workmen' and all persons not in sympathy with Bolshevism are dispossessed."  The article noted "Major Allen Wardwell of the American Red Cross... was looking after the interests of foreign prisoners."

Wardwell's expertise on the situation in Russia continued at home, following the war.  He was consulted by the Council on Foreign Relations in April 1919, for instance, regarding the Bolsheviks, Lenin and Trotsky.  He warned the group, in part, "One of the Bolshevik principles is the international revolution, namely, an attempt to create similar revolutionary movements in other countries"

In the meantime, Helen busied herself within society.  She was affiliated with the Women's Auxiliary of St. George's Church and opened the house for the group's yearly sewing classes during Lent.  She was a trustee and secretary of the Manhattan School of Music, as well.  The Wardwell country estate, Grey House, was in Lawrence, Long Island, where Helen was president of the Garden Club of Lawrence.  An ardent gardener, she routinely won prizes for her blossoms.

The 80th Street house was the scene of a somber event on January 26, 1921 when the funeral of Helen's father, Edward Leighton Rogers, was held here.

Clarissa and Edward received the educations expected of the children of wealthy families.  Clarissa attended the Brearley and the Ethel Walker Schools before going on to Bryn Mawr College.  Like his father, Edward entered Yale University.  While Allen had been a member of the Scroll & Key, Edward joined the Skull & Bones.  He had a theatrical side as well and was a member of the Yale University Dramatic Association.  Edward appeared on stage when that group presented the play Out o' Luck as its annual entertainment at the Plaza Hotel in December 1925.

Allen Wardwell continued to balance his partnership in the law firm of Stetson, Jennings, Russell & Davis with his outside interests.  In February 1926 he was named president of the Legal Aid Society.

Edward graduated from Yale in 1927, the year of his sister's two coming-out events.  That fall she was introduced to society at a dance at Grey House, and then on December 10 a reception was held in the 80th Street house.

Allen Wardwell's many involvements expanded when, by 1926, he became vice president of the American-Russian Chamber of Commerce. (Edward joined him as a director and member of the executive committee in 1929.)  Allen was also a member of the Active Campaign Committee of the American Society for the Control of Cancer.

But, as always, there were pressing issues for Allen to attend to.  Two weeks later, on the day after Christmas, he sailed for Berlin.  A headline in The New York Times read "To Advise On Reich Debts" and the article explained "Allen Wardwell, counsel for the American subcommittee on standstill arrangements with Central European debtor banks, will...participate in the negotiations now going on there for a new agreement to replace the current Stillhaltung."

Despite Allen's exhausting travel and work schedule, he and Helen occasionally managed to fill their social responsibilities.  On July 14, 1933 they gave a dinner followed by a musicale highlighted by a recital by famous mezzo-soprano Eva Gauthier at Grey House.

Allen Wardwell was aware that the house had a security weakness.  The rear of the house was outfitted with a fire escape which he occasionally used to enter the house without waking the household.  Whenever he found himself at the front door without his keys, he would go around to the back, pull himself onto the fire escape ladder, and then climb up to the bedroom window.  But in 1935 a burglar used the same tactic to get in and steal "gems of small value" from the room.  So Wardwell had a bar installed which, when locked at night, ensured that the window was secure.

Unfortunately, on April 30, 1937, Helen had not yet locked the bar when she went down to dinner at 7:00.  Allen was at his office, so she was alone in the house with three servants.  None of them heard a thing as a stealthy burglar climbed the fire escape, entered the bedroom, and made off with between $5,000 and $7,000 in Helen's jewels, some of them family heirlooms.

Only when a maid entered the room at 7:30 and noticed a drawer open and its contents gone was the theft discovered.  Helen telephoned her husband who returned home and notified police.  Among the missing items was a diamond brooch that had belonged to Helen's mother valued at around $34,000 by today's standards.  Detectives' only clue were the footprints of a single man on the fire escape.

The following summer the Wardwells sold No. 127 to Mrs. Christine Fischer.  In reporting on the sale on August 1, 1938 The New York Times noted the exclusive nature of the neighborhood.  "Homes in the same block are owned by Vincent Astor, Lewis Spencer Morris, George Whitney and Clarence Dillon."

Christine Fischer would not be among them for long.  She lost the house in foreclosure in June 1940.  It could be that she overspent on her renovations; for when Dr. Frank H. Netter purchased the house in November that year, major changes had been made.  Delano & Aldrich's severe red brick facade had been embellished with a rusticated limestone base, French doors at the second floor, and molded stone frames around the openings.

The updates did not end with the outward appearance.  On November 26 The New York Times noted "Among its features are a large penthouse studio and library, an elevator, a salon in which extensive paneling recently was installed, landscaped terraces off the dining room and a roof garden off the penthouse.  Extensive alterations have been made in kitchen and pantry.  The kitchen walls are of glass tiles."

Dr. Netter was widely known as a medical illustrator.  He had recently completed an exhibition, the "Transparent Woman," for the 1939 San Francisco World's Fair.  His wife, known professionally as Mary MacFadyen, was also a physician, as well as a newspaper columnist.


The Netters did not stay long in the house.  They sold it to Chester A. Bolles and his wife, the former Martha Lee Sims, in February 1945.  The purchase came just in time for the arrival of a son on April 8 that year.

The 44-year-old Bolles was chairman of Continental Industries, Inc.  The wealthy executive traveled in his own private airplane.  It was around the time that he purchased the 80th Street house that he hired a new pilot, 26-year-old Air Force veteran Jerome Casper.

Just six months after the birth of his son, on Monday evening, November 19, Bolles and four financial consultants were in his airplane during a driving rainstorm when it crashed into the Hudson River near Edgewater, New Jersey.  Two days later authorities had still not located the wreckage nor any bodies.  A briefcase was discovered floating in the river, along with several seat cushions, but, as reported by The New York Times on November 21, "It was believed that the plane was imbedded in the mud of the river bottom and the bodies were strapped to their seats in its cabin."

It appears that only one body was ever discovered; that of Walter A. Hurley which was found on a riverbank.  Bolles was declared deceased, but his net estate of over $1 million was not settled until February 1951.

In the meantime Martha Bolles had sold No. 127 in June 1946 to the family of William S. Glazier.  They remained here until May 1955.  It received a significant interior renovation (costing about $93,000) beginning in 1998 by architect Lawrence F. Guthartz. 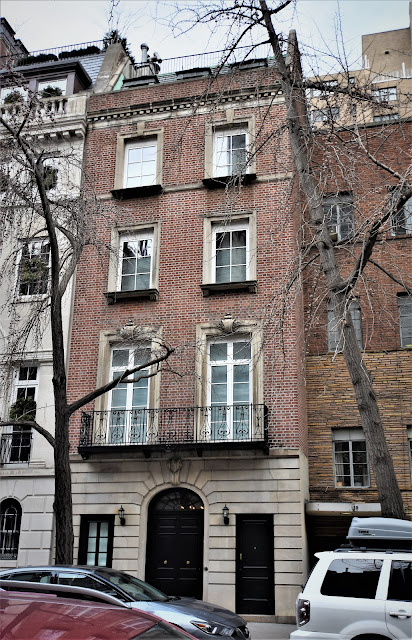 Outwardly the Wardwell house is little changed since the 1940 remodeling that added a touch of personality to formerly dour facade.

photographs by the author
many thanks to reader John Malecki for requesting this post
Posted by Tom Miller at 2:40 AM