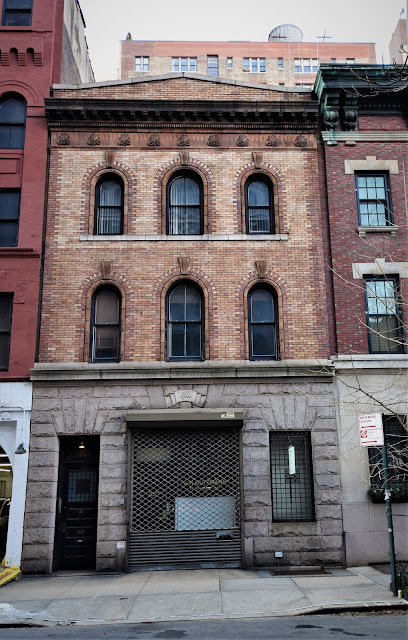 Max Nathan was born in Germany in 1829.  While he was still a boy his family traveled to American.  Unlike many German immigrants who settled in the Lower East Side, the Nathans continued on to the Midwest choosing Cincinnati as their new home.  In 1870, at the age of 41, Max relocated to New York City where he established the Nathan Manufacturing Company which made railroad equipment.  Within the next two decades he also headed The Sieberg Clinder Oil Cup Co. and had amassed a significant personal fortune.

Nathan erected a mansion at No. 32 East 72nd Street in the fashionable neighborhood steps from Fifth Avenue.  Wealthy home owners required private carriage houses for their vehicles and horses, and while a few erected them directly behind or next to their mansions, separated by lawns or gardens, the odors and noises were offensive to most.  As a result, "stable blocks" cropped up nearby--close enough to be convenient yet remote enough to be unobtrusive.  One such block was East 73rd Street between Lexington and Third Avenues.

The block had been lined with modest homes erected in the 1860's and '70s.  The one at No. 180 East 73rd Street was described as a "two-story frame (brick front) dwelling."  But that house, like almost all the others on the block, would not survive to the end of the century.  They were rapidly demolished to be replaced by handsome private stables as millionaires moved onto the blocks to the west.

Nathan commissioned the prolific architectural firm William Schickel & Co. to design his carriage house.  Schickel, too, was a German immigrant (who arrived in New York City the same year as Nathan) and was responsible for scores of churches, business buildings and homes.

The stable, completed in 1891, was a handsome utilitarian take on Renaissance Revival, with a splash of Romanesque Revival at the ground floor.  Schickel faced the base in undressed granite  blocks.  It took on the expected stable configuration--a large carriage bay flanked by a doorway and window.  Above the bay an unfurled limestone banner was carved with the owner's initials. 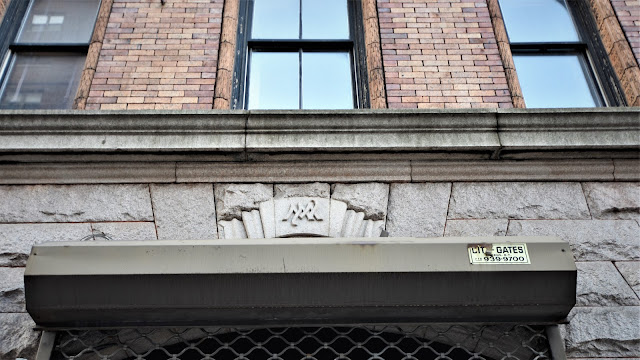 Two floors clad in brick sat atop a molded stone cornice.  The architect deftly used three shades of brick to create dimension and architectural detailing--like the window surrounds and the quoin-like boarders of the facade.  The openings were trimmed terra cotta--leafy border tiles and graceful scrolled keystones.

Terra cotta was again used for the bracketed cornice.  The frieze directly below featured stylized anthemia, looking from the street almost like seashells.  They sat against a flame-like pattern of wavy lines.  Above it all sat a pyramidal brick parapet. 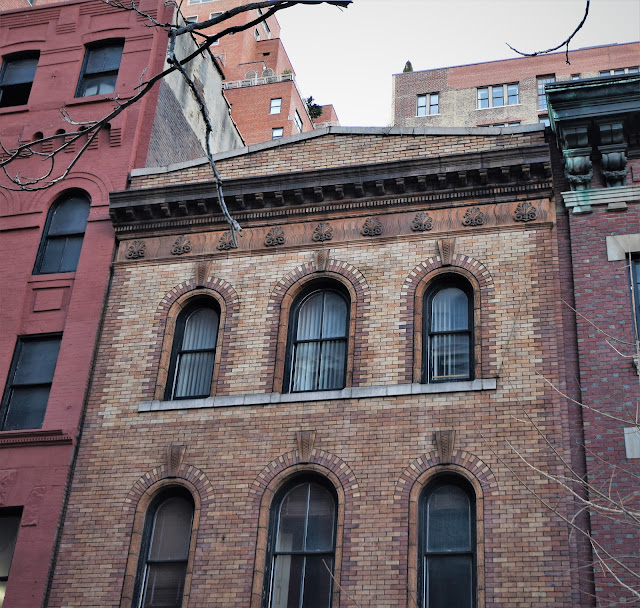 While the vehicles and horses were housed on the ground floor, the second floor would have been used partly as storage--for hay and tackle, for instance.  The rest of the second floor and all of the third would have held living accommodations for stable staff.  Behind the building was the manure pit, an odious but necessary element.

Carriages from the East 73rd Street building quite possibly took the Nathans to their country estate, Fairlawn, in Yonkers.  The family also maintained a summer residence in Long Branch, New Jersey.

Nathan was highly involved in charitable works.  He sat on the building committee of Mt. Sinai Hospital and was one of its trustees for three decades, and was a major benefactor of the Trudeau Sanitarium in Saranac, New York.

In 1912 Nathan retired.  He died at the age of 93 on April 19, 1922.  Four months later, on August 14, the New-York Tribune reported that that Nathan estate had sold what was now described as a "three-story private garage."  The article noted that the buyer was "a well known New Yorker."

Indeed he was.  George Dunton Widener, Jr. was born into a massively wealthy and prominent Philadelphia family,  He inherited a fortune through tragedy.

In February 1912 Widener's father sailed to England on business.  George's mother, the former Eleanor Elkins, accompanied him, partially to attend the opening of the London Museum.  She had presented to the museum 30 silver plates once owned by Nell Gwyn.  Along on the trip was George's older brother, Harry Elkins Widener.

When their purposes complete, the Wideners booked passage back to New York on the recently christened R.M.S. Titanic.  On the night the ship hit the iceberg, the Wideners gathered on deck with the other panicked passengers.  George Sr. helped his wife and her maid onto a life boat and watched as it was lowered into the icy waters.  Then he and Harry stood on deck and awaited the inevitable.  Their bodies were never identified.

George, Jr. married the divorcee Jessie Sloane Dodge--daughter of Henry T. and Jessie Sloane--in 1917.  Like Nathan, the couple lived nearby in a mansion at No. 5 East 70th Street, directly behind the palatial Henry C. Frick residence facing Fifth Avenue.

In 1923 Widener had "renovations" done on the 73rd Street building.  Although the plans are vague, the alterations most likely made the former stable more car-friendly.  But while the Wideners got around town in automobiles, George in no way turned his back on horses.

George Widener was less known for his business interests than for his passion for horse racing.  He maintained a 446-acre estate, Erdenheim Farm, outside of Philadelphia where his stable of thoroughbreds were housed and bred.

Widener's horses raced in the most illustrious events.   He was dealt a severe blow in the spring of 1924.  The New York Times reported "George D. Widener's St. James, three-year-old son of Ambassador IV. and Bobolink II. and the hope of the East for the Preakness Stakes and the Kentucky Golden Jubilee Derby, pulled up lame after his Preakness workout at the Belmont Park track yesterday morning and will not be shipped to Baltimore for the Pimlico classic."

The setback could not dampen Widener's love for the sport.  Later that year, in August, he attended the annual yearling auction at Saratoga Springs in order to add to his stable.  On the fourth day of the sale he purchased Calamint for $5,200, nearly $75,000 in today's money.

Jockeys in the 1920's were, for the most part, teen-aged boys who did not weigh as much as even slender adults.  But work on a horse farm got in the way of schooling.  As The New York Times explained on October 14, 1925, "Horses must be exercised and cared for in the morning, which unfortunately happens to be school time."

To remedy the conflict, Widener established a school on the property of Erdenheim Farm.  Now, after the boys had completed their tasks with stable foreman Bert Muholland, "Mrs. Clinton Aldred occupies their afternoons with training in every subject from arithmetic and English to current events and civics."  There were seven boys in the original class, ranging from 14- to 17-years-old, several of whom came from Long Island.

While George concentrated on racing, Jessie mingled among the top echelon of New York socialites.  She worked with Mrs. Vincent Astor for more than a month on preparations for a recital in the Astor's ballroom to benefit the Mental Hygiene Committee of the State Charities Aid Association on January 7, 1926.

By the 1960's the Wideners had moved permanently to Erdenheim Farm.  (Their 70th Street mansion was later demolished for an extension to the Frick Collection.)  In 1965 at least three tenants were living in the former grooms' apartments above the East 73rd Street stables.  Marion A. Dexter, and Marie and Marion Martin were listed at No. 180.

Change came in 1976 when J. H. Guttmann converted the former carriage house for his picture framing shop on the ground floor and part of the second.  A "private art gallery" shared part of the second floor.  The top floor housed a single apartment, presumably home to owner Jakob Guttmann.  The only noticeable exterior change was the carriage bay, now converted to a show window.

The J. H. Guttmann Picture Frame Corp. was no run-of-the-mill frame store.  Its patrons were, according to The New York Times on September 16, 1979 "museums, fine-art dealers and collectors, as well as the average customer."  The article called Guttman one of the three top framing houses in New York and noted it maintained a stock of antique frames "generally ranging fro early Renaissance to 19th-century American."

Guttman's clients include art museums in Los Angeles, Cleveland, St. Louis, Fort Worth and New York.  His services included restoring and regilding frames, and shortening or enlarging them to fit paintings.  Although J. H. Guttman remained in the building at least through the 1980's, it was sold in December 1981, and then again in March 2002. 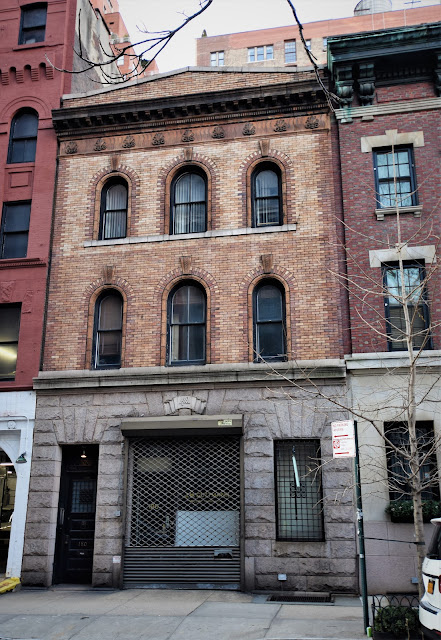 The Nathan carriage house was put on the market in 2018 for $16,750,000.  Like several of the amazingly-surviving private stable buildings on the block, a private residence is most likely in the building's future.