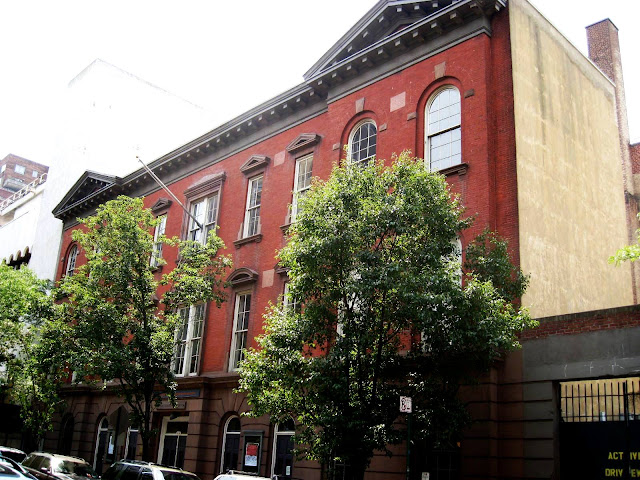 In 1853 the newly formed “Board of Education” took control of New York City public schools, formerly operated by the Public School Society of New York City.  The Board became responsible for the uniform instruction of pupils throughout the city, for the hiring and firing of instructors, and for the construction and maintenance of school buildings.


For a decade already a school building had stood at No. 208 West 13th Street which served the northern Greenwich Village neighborhood.  The building was striking—a Greek Revival structure capped with a classical triangular pediment supported by four two-story pilasters.

But Public School No. 16 quickly became overtaxed as the area developed and more and more residents poured in.  Around 1869 a new school, Public School No. 16, replaced the smaller structure.  A rusticated brownstone base supported two floors of orange brick highlighted with brownstone trim.  The Italianate structure featured handsome arched openings at ground level and triangular and arched pediments above the upper windows.    Twenty teachers were hired to instruct both the primary and grade school classes.


The new school would not be adequate for long.   The population of Manhattan continued to explode throughout the second half of the 19th century and tenements and houses arose where a generation earlier had been rolling fields.   By 1879 Public School 16 had sprouted two flanking additions so harmoniously designed that only the more astute observer could notice they were not original.

The rustication of the base continued unbroken as did the bracketed cornice.  The new additions sported attractive triangular pediments that carried on the cornice bracketing.  Only the arched windows with their faceted brownstone keystones strayed from the original design.


As the population swelled, the school responded.  Within the decade the wings were extended to the rear, nearly filling the playground.


Going to school was not always simple for Victorian boys.  Struggling families needed the extra income a teen-aged son could provide.  To accommodate these boys, “evening school” was opened here in 1889.    “Only students whose ages and avocations prevent them from attending the day schools will be received,” noted The Evening World on September 24.   The boys had to be at least 13 years of age to enroll, and no older than 18.


“Some responsible person must go to the school with applicants for admission and vouch for them,” said the article.  “Otherwise the applicant must show a certificate vouching for his identity and responsibility.”


Construction began again in 1896 to improve the school.   But it ground to a halt when the contractor was not paid.    On September 21, C. B. J. Snyder, the Superintendent of School Buildings, tactfully complained to Joseph J. Little, the Chairman of the Committee on Buildings.


“Dear Sir: I would respectfully report that all the schools are now open, with the exception of the following:  G.S. No. 16, No. 208 West 13th Street opening postponed until the 28th inst.  Contractor reported this morning that as yet he had received no money from the Comptroller on his contract.”


The Annual Report of the Board of Education for the year 1897 documented more construction and expansion of Public School 16.  “Erecting a physical training building 50x50 feet and improving two lots, enclosed playroom and new yard and water closets, and improve interior of old building.”


The two lots had been purchased to the west of the school, most of which became the new playground.  The “physical training building” was a one-story structure at the western edge of the property, connected to the main building by an extension of the rusticated base that formed a wall protecting the schoolyard.  These renovations were designed by Snyder whose intelligent views revamped New York City school building design.  His sympathetic attention to the historic architecture resulted in the seamless annex.


The “water closets” reveal that indoor toilets had not yet been installed in the building.

Public School 16 was the site of educational lectures throughout the 1920s.  Free of charge, the evening talks were open to the public and covered a wide range of topics.  On December 13, 1921, for instance, Rex Hunter gave a lecture on “New Zealand” accompanied with stereopticon views.  The following year Mrs. Florence P. Clarendon lectured on “Women’s Work in Music.”

The City reconfigured the school system in the 1930s and Public School 16 became the West Side Vocational High School.  Here students were now trained for specific trades; preparing the teens who would not be going on to college to make their way in the world.  The Board of Education filed plans for $8,000 in alterations to refit the school.

By 1969 the school had become The Food and Maritime Trades Vocational High School; offering an even more focused curriculum.    That year on June 28, further south in Greenwich Village at a bar called the Stonewall Inn, a confrontation between homosexuals and police would change history.


The Stonewall Riots marked the beginning of the Gay Rights movement throughout the country.  Before long an interwoven community of organized groups and institutions formed.


The Lesbian & Gay Community Services Center, Inc. leased No. 208 from the city in 1998 and initiated a two-year renovation.  Then, in December 1983 it purchased the building for $1.5 million.  Architect Francoise Bollack was commissioned to  do an all-encompassing restoration and conversion, completed in 2001.  The project earned Francoise Bollack Architects awards from the Greenwich Village Society for Historic Preservation, the New York City Landmarks Conservancy, the Victorian Society of America and a certified of merit from the Municipal Art Society.

Bollack’s sympathetic treatment of the façade continues the building’s tradition of unnoticeable growth and change.  Its use as the LGBT Community Center is an applaudable reuse of a vintage structure.  Today the former school building is used by at least 300 groups providing services in such areas as health and wellness, culture and arts, and career services.


non-credited photographs taken by the author.
Posted by Tom Miller at 3:23 AM