East 16th Street between 3rd Avenue and Irving Place in 1850 was becoming an attractive spot to build a new home.  Four blocks to the north was Gramercy Park and a block and a half to the west was Union Square.  Around both of these parks elegant brick or brownstone mansions were rising as the area became both exclusive and fashionable.


A row of nearly identical brownstone houses were completed that year along the south side of East 16th, including No. 136.   They were typical of the scores of similar homes designed in the popular Greek Revival style rising throughout the city.  Steep brownstone stoops rose to the parlor level which sat above a high English basement.   Four stories tall, their understated elegance relied solely on the brownstone entranceway, bracketed cornice and restrained lintels for decoration.


Inside heavily-carved newel posts would grace the staircase and ornate plasterwork would adorn the ceilings of the parlor and dining room.   Matching marble mantels on the first floor as well as rich woodwork would reflect the social station of the new residents.


Samuel Raynor lived at No. 136.   When Raynor was still just 12 years old, he left his home in Hempstead, Long Island, and took a job in a stationery company owned by Richard Barlett  at No. 76 Bowery.   The small business printed playing cards, legal blanks and blank books.  In 1835, when Raynor was now 25 years old, Barlett took him as a partner.


When Barlett died two years later, Raynor brought his brother, Hiram, into the business, renaming it H. & S. Raynor.  Hiram retired in 1847 and Samuel forged on.  His fortunes soared when, in 1858, he began manufacturing envelopes at a time when most people will made their own by folding a sheet of paper and sealing it.  His pioneering spirit did not stop there.  He introduced fast-running machines, ordering twelve of the $500 devices in a brave but risky investment. 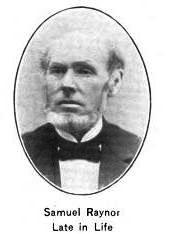 By 1888 Samuel Raynor & Co. was one of the largest envelope manufacturers in the nation.  He was also a Vice President of the Metropolitan Savings Bank, a director in six insurance companies and sat on the board of the New York Board of Trade and Transportation.  The 78 year-old had made a fortune and was living comfortable on East 16th Street with his wife, Sarah Dodge Raynor.


But 1888 would be a devastating year in the Raynor household.


On March 11 of that year Raynor was caught in one of the most severe blizzards ever recorded in the United States.  The storm lasted for three days and up to 50 inches of snow fell.  The sustained 45 mile per hour winds caused drifts over 50 feet high.  It would be remembered as the Great Blizzard of 1888.


By the time the elderly Raynor was rescued, he suffered from exposure.  Confined to bed, his condition worsened to pneumonia and on Monday, May 7, he died.  At 10:00 in the morning two days later, his funeral was held in the parlor of No. 136 East 16th Street.


Within a week there would be another funeral here.


In the damp Spring weather at the gravesite that Wednesday morning, Sarah Dodge Raynor caught a chill.   The 74-year old woman was unable to recover and on Sunday, May 13, she died of pneumonia, just as her husband had done a week earlier.  Her funeral was held in the parlor the following Tuesday.

The American Stationer remarked “Mr. and Mrs. Raynor were a particularly happy couple, spending fifty-three years of wedded life together, and their deaths so close together is noticeable.”


A year later the Raynor house was converted to “French Flats”—the term being used to clearly distinguish high-end apartments from tenements.  The conversion marked a trend towards apartment living in the neighborhood begun six years earlier when The Gramercy was erected on nearby Gramercy Park—the first cooperative apartment building in the city.


The architectural firm Herter Brothers (not to be confused with the interior designers), was commissioned to handle the conversion and to update the façade.   The Greek Revival house that had previously been unexceptional was suddenly anything but.   The architects created cast metal window surrounds in a highly-unusual sawtooth motif.  Pyramidal bosses lined up along the sides and sills creating tactile visual interest.  An up-to-date parapet was added to the cornice and an imposing portico with free-standing Corinthian columns installed.   The ironwork of the stoop was updated to reflect the Eastlake influence, as were the double entrance doors.

Among the first residents of the apartments – one per floor—were poet Stephen Henry Thayer and his wife.  Mrs. Thayer was active in the New York Diet Kitchen Association, a charity that provided “nourishing food, such as beef-tea, milk, rice, and oatmeal, free, for the destitute sick.”  The group assisted 21,866 invalids during 1900 alone.  Thayer was secretary of the membership committee of the Authors Club; a select group that would accept no one whose works had not been published.

The poet’s best known collection, perhaps, was his 1886 “Songs of Sleepy Hollow, and Other Poems.”  Critical appraisal of the work was mixed.  The Atlantic Monthly was somewhat harsh, saying “Mr. Thayer’s collection of his poems ranges over a number of years, and includes apparently the casual recreations of an otherwise busy man.”


The New York Observer was a bit kinder.  “The author is a true poet in sentiment and feeling, and he is able to give to those thoughts which possess his own soul such expression that others feel and know them.”

The unmarried Jane J. Boudinot lived here at the same time.  An American blueblood, she was a descendant of Elias Boudinot, President of the Continental Congress and Commissary-General of Prisoners under General Washington.   A member of the Colonial Dames of America and the Huguenot Society, Miss Boudinot regularly contributed articles to the Magazine of History and various newspapers.


In her will, she bequeathed a portrait of Washington by Remington Peale to the Mount Vernon Ladies’ Association.


The roomy apartments were home to a variety of other tenants—in 1917 Private First Class Gordon W. Jewett was living here when he marched off to war with the 165th Regiment; and C. F. Goodwin Kuyk had an apartment in the building in 1924 when he was admitted to the New York Bar.

In 1956 the house was purchased by preservation architect Joseph Pell Roberto and his designer wife, Carol.   Renovations were done in 1958; however the spacious one-to-a-floor apartments remained.   Joe Roberto died in 1988, one of the most esteemed preservation architects in the city.  Carol Roberto remained on, living in the parlor floor apartment and earning the neighborhood nickname “The Litter Lady” for her fastidious cleaning of the sidewalks.  The indefatigable woman worked for preservation of parks and historic buildings until she was struck with heatstroke in August of 1998.  Two weeks before her 87th birthday Carol Roberto died.


The remarkable house at No. 136 East 16th Street still has only one apartment per floor.  And it remains, as Carol Roberto called it, a “showstopper.”
Posted by Tom Miller at 4:37 AM