Despite the drastic changes along Broadway below Union Square following the Civil War, Judge James Roosevelt refused to budge.  Commercial buildings replaced the fine old homes around his as his wealthy neighbors moved northward to Murray Hill and Fifth Avenue, yet the judge stayed on in the house he had built in the 1840s.


Roosevelt was a member of one of the oldest and most prestigious families in New York.    He had further distinguished the name as a Justice of the Supreme Court in 1851, United States Attorney for the Southern District of New York and a member of Congress.  But finally, in 1875, James Roosevelt died in his house at No. 836 Broadway; one of the last surviving residences in the neighborhood.


Within a year the venerable house and its neighbor at No. 838 had been razed and a new commercial building was going up.   Mitchell, Vance & Co., manufacturers and designers of light fixtures, clocks and bronzes, and ornamental metal work, had commissioned esteemed architect Stephen Decatur Hatch to design the new building.

The firm was established in 1854 and by now was a leader in the industry.  The wide array of items offered by Mitchell, Vance & Co. required extensive showroom and office space.    Over 600 workmen and artisans worked in the factory and foundry on 10th Avenue between 24th and 25th Street.


To satisfy the needs, Hatch produced a wide, spacious cast iron structure six floors high that terminated in a stylish, steep mansard roof.   Begun in 1876 and completed a year later, the L-shaped building had a side entrance on West 13th Street.


Despite Mitchell, Vance's own high-end clientele and the exclusive nearby emporiums that also catered to New York’s carriage trade, the architect did not over-embellish.  In fact his understated iron façade has a nearly-industrial feel.   Regimented rows of windows and mostly-unadorned pilasters gave little hint of the elaborate and costly items for sale inside.  Only the fish-scale covered mansard with its attractive dormers gave an aristocratic touch to the design.  And yet the façade, taken as a whole, presents a dignified and upscale presence.

“New York’s Great Industries” remarked that “Their showrooms, salesrooms and offices occupy the entire six-story double building, Nos. 836 and 838 Broadway…The amount of floor space in the establishment is thus enormous, and yet it is none too large for the immense stock here gathered together, and which forms the best exposition of their lines of goods ever presented to a discerning public.  The showrooms make a most magnificent display, and which is a great attraction both to citizens and visitors to the city.


No other house in the world has its equal, while in the qualities of modern adaptability and true art, the firm possesses facilities as regards designing and manufacture admittedly nowhere else to be found.  Artists, native and foreign, are constantly employed in designing and modeling subjects to be produced in both real and imitation bronze.”


The electric lamps and chandeliers were based on the existing gas fixtures and were outfitted for both—it would be decades before the reliability of electrical service would warrant electric-only fixtures.    “It is the leading house to enter the field of electric lighting, and plan and bring out multifarious and beautiful designs for electric light fixtures of every description,” said “New York’s Great Industries.”


The new technology was a tremendous boon to the company.  By now it had illuminated the first private residence lit by electricity, the J. Hood Wright house; as well as the mansions of J. W. Doane of Chicago and Marshall Field; the Murray Hill Hotel and the Hoffman House; the Minneapolis Opera House and the “Dakota Flats” facing Central Park, among many others.


The company outfitted the steamer Pilgrim with 912 electric lamps “including two beautiful electroliers ornamental in the highest degree, and shedding a radiance through the main saloons, as grateful as it is effective at night.”


On August 21, 1887 The New York Times said of Mitchell, Vance & Co., “It heads the list of concerns manufacturing and dealing in gas fixtures and similar goods, and so great has been its volume of trade that, last night, it was said to have supplied three-fourths of the fine grade goods in its line used in the United States.”

The expansion of the firm’s business was such that in 1889 The Electrical World reported that it “[has] devoted the basement of their large salesrooms entirely to electric fixtures.”     Interior designers, architects and homeowners visited the Broadway building.  “On the main floor an elegantly carpeted and decorated room is assigned to handsome electroliers, fixtures and brackets, and furnished with the electric current for exhibiting them to buyers in all their glory of illumination,” said the magazine.   “This reception room alone is worth a visit to the store to inspect.”


Financial problems forced the company to reorganize and cinch in its belts.   In 1890 Samuel B. H. Vance—who had also been Mayor of New York—died.  That same year the company was leasing space to apparel companies as the dry goods and millinery district engulfed what had formerly been solely high-end retail buildings.


Malcomson & Co., makers of boys’ clothing moved in after its offices were destroyed in a fire at No. 549 Broadway.   In 1898 Hutchinson, Pierce & Co., “shirt and waist manufacturers,” was leasing space, including part of the retail area.  The American Hatter said its “‘Star’ brand is one of the best known in the market, and having been famous since 1840, Hutchinson, Pierce & Company are proud of their record, as they certainly out to be.”

The periodical also noted that Louis Auerbach “has redecorated his establishment, and has made it one of the handsomest in the trade.  Mr. Auerbach is showing an extensive line of high-class novelties in neckwear, which should be seen by the trade.”


In 1906 Mitchell, Vance now shared its building with six other firms.   On February 11 catastrophe would strike Nos. 836-838 Broadway.  Early in the morning a fire broke out on the 2nd story of the 13th Street side where the Philip Anderson company made hats.  It quickly spread up the elevator shaft, engulfing the building.  An automatic fire alarm brought fire engines and before long 17 fire companies were battling the conflagration.  The Times reported that “The building—an old-fashioned one belonging to the Roosevelt estate—offered little resistance to the flames.  The ceilings crumpled like paper before the scorching blasts, and the partitions furnished fine kindling material.”


Captain Walsh of Engine Company No. 14 and two of his men, firefighters Healy and Kelley, were on the third floor when the floor above collapsed, burying them.  As firemen poured water on the heap others dug frantically to rescue the trapped men.  The newspaper reported that “The buried men were almost drowned” but they were saved.  “Walsh’s eyebrows were gone and his heavy mustache was singed short when he was pulled out.  The hair of all three of the men was burned close to the scalp and all were bruised, scorched, and cut from head to foot.”


Another firefighter, Ladderman George Knecht plunged two stories to the pavement when he was hit by a falling part of the building.  In the freezing temperatures, the water from the fire hoses froze as it hit the building and it took five hours to extinguish the fire.


In the end there was over half a million dollars in damages.  “The building was wrecked and the stocks of seven firms destroyed,” said The New York Times.  Philips, Anderson & Co., where the fire started, was a complete loss.  J. Goldstone & Company, makers of cloaks and suits lost its entire stock as well.  The same was true of Heller & Company.   The Pioneer Suspender Company, the Savoy Shirt Company and the Heath Krises Company who made felt hats were all heavily damaged.


But it was Mitchell Vance Company that was hit the hardest.   An insurance agent on the site estimated the loss at around $200,000—just under $4 million today.  The company was insured for only $125,000.


Despite the devastation, the structure was rebuilt.  Stephen Decatur’s “fireproof” façade was just that.  It survived intact.    Within months even Mitchell Vance Company was back in operation from its old headquarters.


The new tenants continued to come from the garment and millinery industries.  Crown Suspender was here in 1908 and Phillips, Anderson & Co. was back in the building, doing a brisk business in the straw hat trade.   The company would remain here until 1911 when a fire destroyed its factory.


Finally in 1915 the Mitchell, Vance Company left after nearly four decades in the building and 61 years of business.  The Roosevelt estate leased about 20,000 square feet of the building that year to Weiner Brothers, Inc., a major dealer in “cotton, sleeve, mohair, satin, pocketing, silk and converters of cotton goods.” 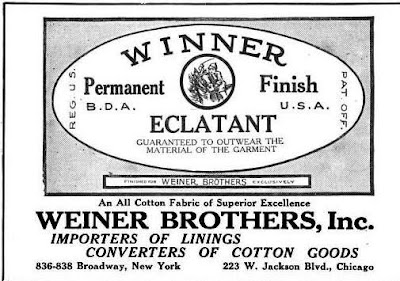 Early in December 1921 the Roosevelt family sold the building at Nos. 836-838 Broadway to “a cotton merchant” after having owned the property for over three-quarters of a century.   The building continued house garment firms including the Zeeman & Grossman Bros. Company, manufacturers of young men’s clothing, and the Velvet Sample Card Company.


By the 1930s the garment district had moved upward to Broadway and 7th Avenue and Nos. 836-838 Broadway saw a variety of tenants.  Among these in 1950 was the J. Beeber Company, makers of surgical and medical equipment.   That year the firm donated ten short-wave diathermy machines and other medical equipment to the new state of Israel and to the National Side Fund of Palestine.


Today the building is little changed.   No modern shop fronts have obliterated the street-level iron work; although the original expansive showroom windows have been reduced in height by half and the attractive entrance doors are gone.    Home to, among other concerns, the NYU Press, Stephen Decatur Hatch’s subdued Victorian design has withstood the onslaught of time, fire and change.
Posted by Tom Miller at 2:57 AM