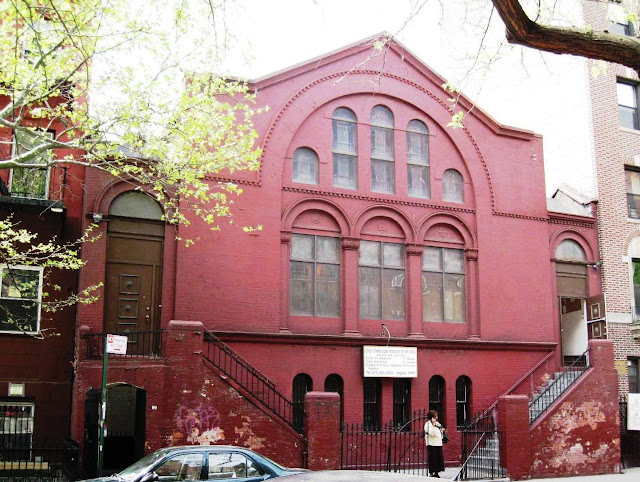 In 1887 Frank Leslie’s Sunday Magazine wrote “There stood, formerly on West Sixteenth Street, not far from Sixth Avenue, in New York city, a church edifice which represented one of the oddest denominations in the world, and voiced each Sunday the sentiments of a sect that has a strange history and a strange belief.”


The magazine referred to the Catholic Apostolic Church, an offshoot of the Catholic Church founded in the 1820s by the Reverend Edward Irving, pastor of the Scottish Church on Regent Square in London.  Among the sect’s strong beliefs was that the Second Coming was imminent—precisely it would happen in 1835.


Twelve new “apostles” were chosen and they alone could ordain ministers of the church—called “angels.”  As it turned out, 1835 came and went but the Second Coming did not.  Nevertheless the Catholic Apostolic Church grew and the date of the Second Coming was pushed off.


In 1848 a congregation was formed in New York City.  The group worshiped for a while in a small room of the University of the City of New York before taking over the small brick church on West 16th Street mentioned by Frank Leslie’s magazine.


The little building had been built around 1835 when the Chelsea neighborhood was just developing.  The quiet, middle-class block was a peaceful setting for the congregation for three decades.  But by 1885 it had outgrown the small building and erected a large structure at 417 West 57th Street, completed in 1886.


The 16th Street church was sold to the Eglise Evangelique Francaise de New-York in 1885.  The French Evangelical Church was a Presbyterian congregation founded in 1846 by the Belgium-born Antoine Frederick Twyeffort.  French immigrants had been settling in the Chelsea area and in 1857 the French language Roman Catholic church of St. Vincent de Paul was completed a few blocks north on 23rd Street.


The French Evangelical Church commissioned Alfred D. F. Hamlin to remodel the out-of-style church.  The architect redid the interiors and updated the façade in the German version of Romanesque Revival called Rundbogenstil.  The result was a chunky mass with a central arch outlined in dentil brickwork.  Well above the sidewalk, arched entrance doors on either side carried on the rhythm of the collection of arches in the main structure.


The congregation included members from all walks of life.   Sitting alongside middle-class worshipers were wealthy members like Alfred E. Andre who gave $70,000 to build a Young Men’s Christian Association building in Paris and was a Regent of the Bank of France and a Chevalier of the Legion of Honor.


In 1907 when educator Louise H. LeClere’s will was read it caused what the Christian Advocate called “hostile criticism” in her homeland.  Although she left large bequests to American institutions, including the French Evangelical Church, she was extremely generous to French charities.  The Faculte de Theologie Protestante de Mountauban, for instance, received 100,000 francs.  Ironically this is what raised the ire of her countrymen.


In her will she explained her generosity to France was out of concern for its depravity.  “My object in giving institutions in France so large a portion of my means is twofold, namely, to raise her from her present low moral state, and thus prevent her from doing so much harm to this country, in which she exerts so potent an influence.”


The Christian Advocate explained “She believed that France has deteriorated greatly and that the worst influences are exerted over the social side in New York by the Paris moral and social atmosphere.”  Although the French were outraged, they did not refuse the bequests.


The minister of the French Evangelical Church at the time was the 70-year old Rev. Henri I. Grandlienard. The amazing cleric had been a missionary along the upper Nile River before arriving in New York.  On March 21, 1912 The New York Observer made note of his 40th anniversary as head of the congregation.  In addition, he ran the Home for French Working Girls on West 30th Street for twenty-five years where young French women arriving in New York were temporarily housed while seeking employment as teachers, maids, nurses or governesses.


The article called him “hale and hearty” and said he was “looking forward to further years of service.”  Tragically, that would not be the case.


Two months later, on May 13, he visited a dentist office on Sixth Avenue to have a tooth pulled.  What would normally have been a routine procedure resulted in his gums hemorrhaging.  He was taken to the New York Hospital where he died later that night from “apoplexy.”


Among the young women who came alone to New York from France was May Jacquard.  When her family was killed in World War I she immigrated, leaving the ruins of her country and the painful memories behind.   The girl got a job with the Y.M.C.A. teaching French to soldiers stationed at Fort Jay and Fort Slocum, as well as prisoners on Governor’s Island.  The future finally looked promising for her.


Then, after being in her job for not quite a year, she contracted tuberculosis and died in a sanatorium at Lakewood, New Jersey.   Her funeral at the French Protestant Church and her burial were taken care of by the Y.M.C.A.


By the following year the church had 656 members and approximately 600 other attendants who were not members.  The pastor, Reverend Paul D. Elsesser was somewhat apologetic for the congregation’s reliance on the French language.  “Our services are in French,” he said, “but part of our people understand English well.  We do not have English classes in the church, but we encourage our people to attend classes in our French Y. M. C. A.”  The minister added “As a rule the members of our church and congregation have a good education and appreciate the United States.”


On November 14, 1948 the French Evangelical Church announced its plans to raze the century-old building and replace it with a $200,000 structure.  The plans, however, never got off the drawing board.  Instead, at some point in the last part of the 20th century, someone thought it would be a good idea to slather maroon paint over the brick façade, causing the AIA Guide to New York City to complain “The dour dark paint almost smothers form and detail.”


Then, after 125 years in its brick home, the church made plans again.  In August 2010 it sought proposals from developers to gut the building, renovate the cellar, first and second floors for church use, and build an 11-story residential tower above it.


In 2012 the architecturally and historically interesting church awaited its fate.  In the meantime, the church sold the abutting brick structure, used as "an asylum" to Einhorn Development Group who teamed with architect David Howell of DND Architecture Design PLLC.   Worried neighbors were assured that the church would be preserved; and that the planned residential building at No. 124 would meld into the streetscape--just six stories tall with one unit per floor.

In fact, that was not true. 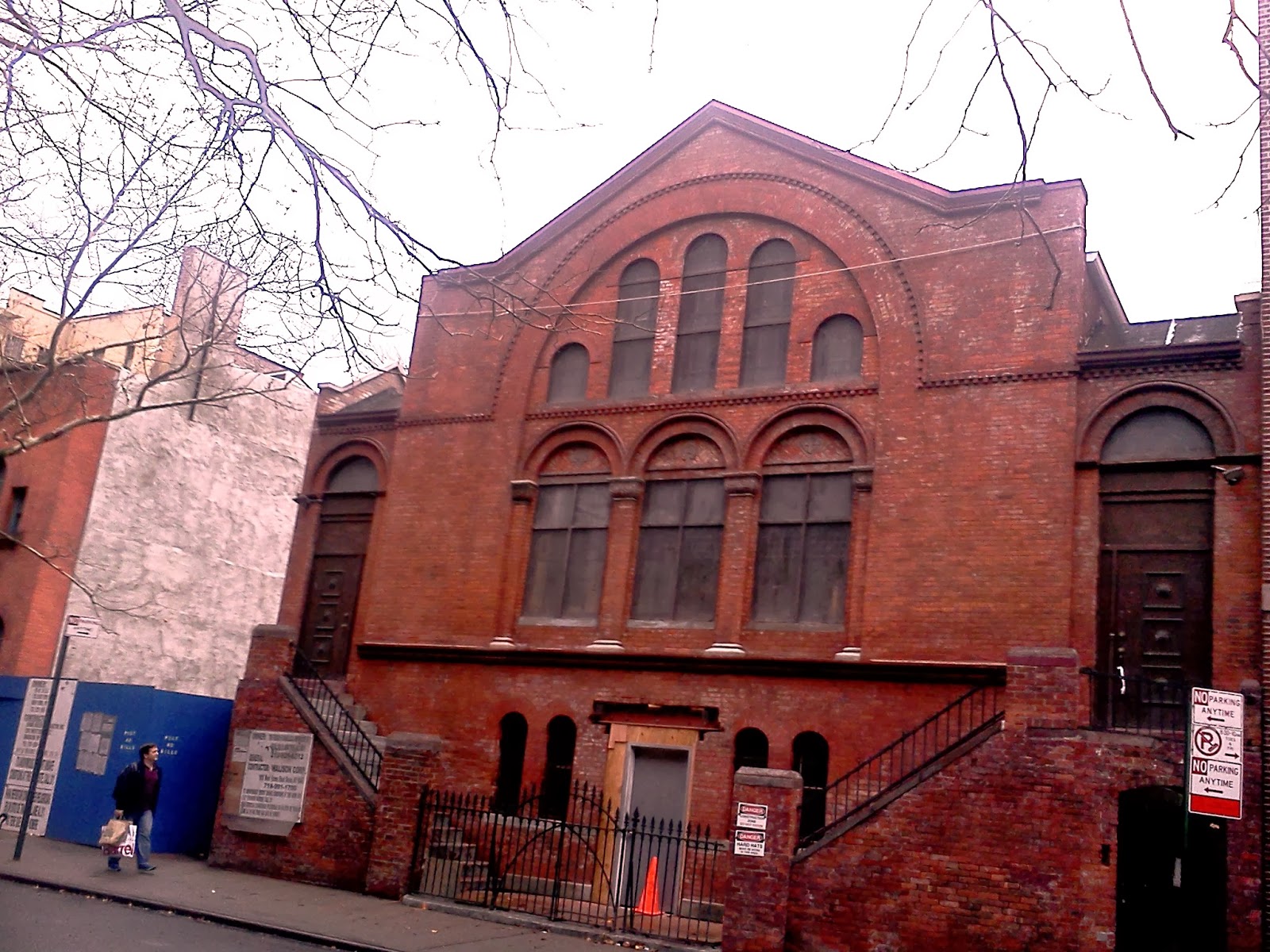 In 2013 the church had been striped of its paint and the lot next door at No. 124 awaits construction -- photo by Scott Stiffler, Chelseanow.com

As the building began rising in 2013, residents of the block discovered that the Einhorn Development Group, which now owns the site, were erecting an 11-story tower and, apparently, had intended to all along.  The resulting sore thumb would not only diminish the important 1835 church next door, but successfully obliterate the charm of the block.

The developer's principal, Yiannes Einhorn, has listened to the heated complaints and keeps building.

non-credited photograph taken by the author
Posted by Tom Miller at 2:52 AM