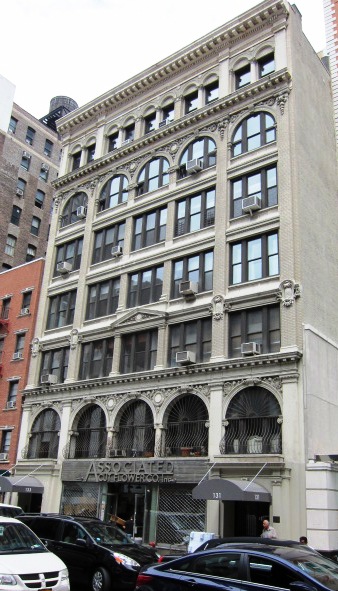 On the morning of March 1, 1895 workers filed into the new buildings at Nos. 151 to 157 Orchard Street recently erected by William F. Lennon.  Four of them would not return home that night.

Louis A. Hornum was Second Deputy Superintendent of the Department of Buildings and he, along with Inspector Guy B. Waite, had inspected the buildings during their construction.   The architect’s plans for the structures were defective in regard to the load put on supporting walls, the materials were poor and workmanship bad.  The construction nonetheless passed approval.

Within two weeks a jury composed of architects and builders headed by architect Ernest Flagg came to a verdict:  Hornum and Waite were found to be “grossly careless.”  It was the end of Hornum’s career with the Department of Buildings.

Instead of inspecting buildings, Louis Hornum turned to designing them.

The new career path was successful.  By 1908 he had offices at 145 East 42nd Street and early that year he received a major commission to design a loft and office building.

The Tarrytown Building Company, of which John A. Walker was president, had bought up the two five-story buildings at Nos. 131 and 133 West 28th Street and in April announced plans for a 7-story “business building.”  Plans were filed in July with an anticipated completion date within only four months at a cost of $100,000.

Before the plans were off the drawing board, the entire building was leased at a net rental of $300,000.


Hornum combined the equally-popular Italian Renaissance and Beaux Arts styles in his eye-catching design.   The two-story stone base rose with four tall arches.  The spandrels gushed forth with carved wreaths, garlands and deep scallops.

The four-story central section was clad in buff-colored brick and stone that echoed the arches below; while the arcade of the top floor above a bracketed cornice doubled the number of arches.  In the center of it all, one classical pediment at the third floor strayed from the arch motif—looking like a wayward Greek temple.

The neighborhood was already the center of New York’s wholesale flower district and in 1915 Traendly & Schenck “wholesale florists and cut flower exchange” was sharing the ground floor with William Kessler “wholesale plantsmen and florists.”

The floors above filled with printing firms sub-tenants; among them The Williams Printery which offered typographic service and the Goldberg Printing Company. 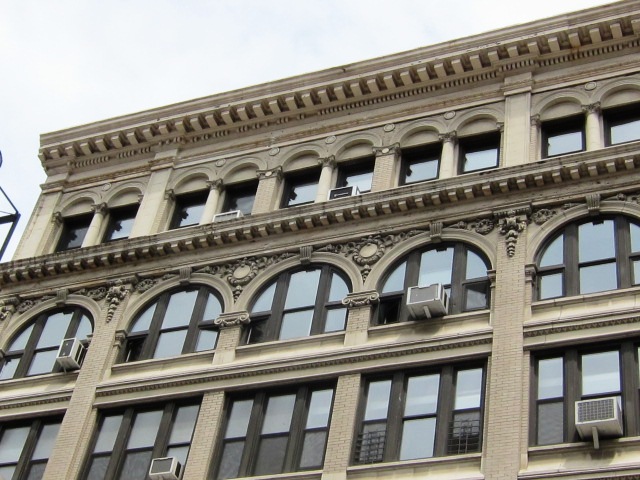 Things went smoothly at No. 131-133 West 28th Street until 1930.  In January of that year Dettner Estate, Inc. took the deed to the property.  The new owners would soon, most likely, regret the move.

It was a period when communism, socialism and union movements directly and sometimes violently clashed with capitalism and mainstream business.   The first hint that the social upheaval was taking seed in 28th Street building came on November 24, 1930 when worker Philip Nicholas was arrested for taking part in a riot a few blocks away.

In an article with the headline “70 Police Battle 1,500 Rioting Reds” The New York Times recounted how “a crowd of Communists” attempted to force Zelgreen’s Cafeteria at 257 W. 34th Street to replace its staff with American Federation of Labor workers.   Fighting  broke out and before it was over policemen and rioters were hurt and Nicholas, along with 14 others, were hauled off to jail.

By 1932 the Needle Trade Workers’ Industrial Union was established on the third floor of No. 131 West 28th Street.  Ben Gold, a prominent Communist labor leader, was secretary.  In March of that year the Union was attempting to induce workers at the Ritz Hat Company down the block at No. 151 to strike.  The Ritz Hat employees were less than amiable to the idea.

Around noon on March 8, the union members entered the Ritz factory, shut off the power and harangued the workers to strike.   Instead of wooing the workers to their side, the union simply angered the hat workers.

Later in the afternoon Gold and five other union members were in the office when five workers from the hat company entered.   According to Gold one man asked for him and when he identified himself, the man “punched me in the nose.”  When Gold fought back, the intruders brought out blackjacks and iron pipes and a pistol.

The Times reported “A free-for-all fight ensued in which the radicals, without weapons, at first had the worst of it.  Gold was knocked down.  As he arose, he said, three shots were fired at him.  A number of other shots were fired, one nicking a finger on Gold’s left hand and another wounding the left arm of Edward Stark, union member, described by the police as a Russian tailor.”

The noise and the shots attracted a crowd and the hat workers escaped to the Ritz building where all but the shooter, who was arrested, disappeared into the crowd of other workers.

A year later the Needle Trades Workers Industrial Union had grown to include 11,400 members in the “fur section” alone.  Ben Gold was now “national secretary,” a term that translated to “president,” and the Union had lead strikes not only in New York City, but in Chicago; Bridgeport, Connecticut; Gloversville, New York and other cities.

The union’s violent conflicts were not restricted to non-union groups.   In March 1933 Morris Langer, Communist leader and union manager at Chatham, New Jersey entered his automobile and turned the ignition key.  A bomb that had been placed under the hood exploded, killing Langer.  The union blamed Ben Gold and the Needle Trades Workers Industrial Union and sought revenge.

A month later, on April 24, around 10 a.m. a gang of men forced their way into the second floor headquarters on 28th Street armed with pipe bludgeons.   One of the men rushed to the desk of Shirley Koretz, the telephone operator, and ripped the wires from the wall.

The intruders then began pummeling their union rivals with the pipes.   The fight escalated when some of Gold’s men brought out razor-sharp furrier knives and began stabbing their attackers.  This induced the use of revolvers from the opposing side.

Over 100 police swarmed into No. 131-133 West 28th to quell the melee.  By the time the fight was over one man, Manny (Birdie) Burdy, was dead, nine were arrested and sixteen injured.

As a result of the latest raid, Police Commissioner Bolan assigned an additional 50 detectives and 150 uniformed patrolmen to the area around the building.    The Commissioner said the action was aimed “to prevent a recurrence of armed hostilities between Communist and other factions of needle workers.”   The 200 cops “have instructions to search every suspect for weapons and to break up gatherings on the streets where trouble might arise,” noted The Times.

Things at Nos. 131-133 West 28th Street settled down in 1950s.  In 1957 the ground floor was still home to wholesale florists and the upper floors held offices and “light manufacturing.”  As the century drew to a close, the industrial flavor of the neighborhood changed.  Modern, high rise apartment buildings began replacing parking lots and loft buildings. 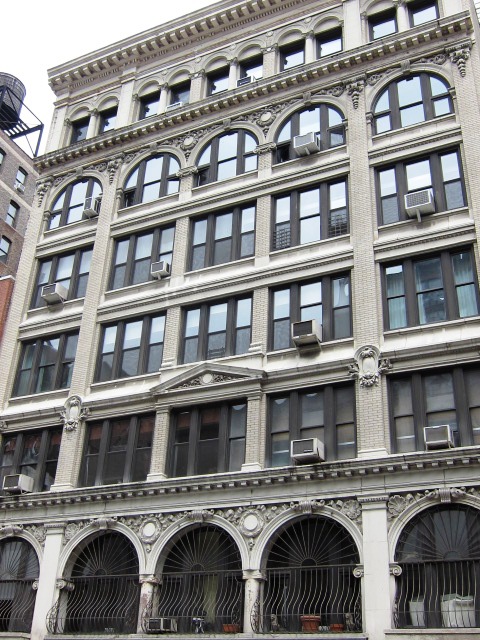 In 1982 the upper floors were renovated to become 24 loft dwellings with four apartments per floor.  The owners of $1 million homes are most likely unaware that they are living where radical union members were once involved in stabbings, shootings and violent beatings.

non-credited photographs taken by the author
Posted by Tom Miller at 2:30 AM