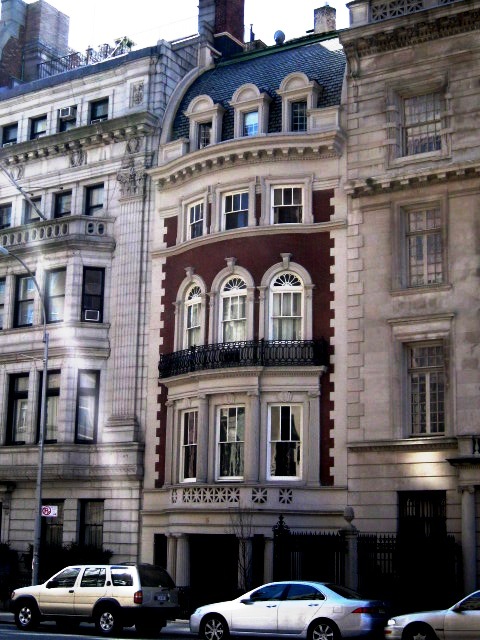 Nearly simultaneously in the spring of 1900, the side-by-side mansions of James E. Nichols and Frederick Gebhard were completed on East 79th Street.   Sitting just east of the magnificent French chateau of Isaac D. Fletcher at the corner of Fifth Avenue, the two residences could not have been more different.

The flat dignified limestone façade of Nichols’s house at No. 4 was nicely contrasted by Gebhard’s red brick and white stone, bowed home at No. 6, designed by the architectural firm of Barney & Chapman.  Entered at street level, Gebhard’s brick-faced mansion offered a delightful splash of color.    Hefty Doric columns supported a deep curving portico that introduced the bowed shape of the house above.  At the third floor, three arched windows behind an iron railing featured elegant fanlights and scrolled bracket keystones.  Above it all, a slate-tiled sloping mansard roof was punctured by three hooded dormers.

Unlike most of the millionaires in the homes around him, Fred Gephard did not work.  His fortune was not made in railroads or banking; it was inherited.  The only son of a fur and silk importer, he had inherited $5 million in the 1880s with an annual interest income of $80,000.  Strikingly handsome, he lounged through life yachting, breeding thoroughbred horses and studying architecture and wine.  A well-known clubman, he collected oriental carpets and rare books.

His life changed when he became smitten with the married English actress Lillie Langtry.  He convinced the star to become a partner in his horse-breeding venture.   By 1888 the pair was scandalously connected and the press took delight in publicizing their affair.  Gephard’s fellow club members openly disapproved of his conduct as Mrs. Langtry sued her husband for divorce.


Eventually, Frederick Gebhard realized that the obstinate Edward Langtry would not consent to divorce and the affair was fruitless.  In March 1894 he married Louise Hollingsworth Morris, daughter of a wealthy Maryland horse breeder and moved to New York. 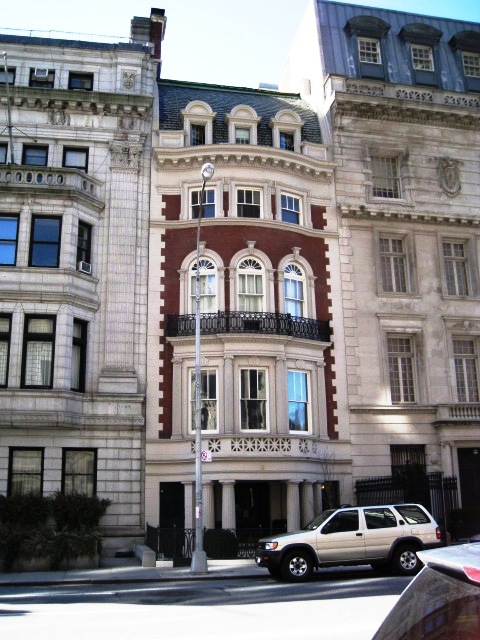 The Gebhards would not stay long in the new house, however.   In September 1901 Fred leased the house to James Gayley who had just been named vice president of the newly-formed United States Steel Corporation.

Gayley stayed on for one year before moving to No. 8 East 69th Street.  Frederick Gebhard No. 6 East 79th Street to 59-year old broker William Frederick Stafford in March 1904.  The Staffords enjoyed an active social life.   On April 19, 1908 The New York Times noted that Stafford “came over from Paris on Sunday and Mr. Stafford left town today to join a fishing party in Scotland.”

After Stafford died on December 4, 1918, Mrs. Stafford left the mansion for an apartment.  The house was home to the William Carter Dickerman family through the 1930s.  The Dickermans summered in their East Hampton estate, Dune Dee; but it was the East 79th Street house that provided Mrs. Dickerman a base of social operations.

In 1932 the house saw teas and dinners as daughter Honour Redington Dickerman was introduced to society.   As president of the New York Kindergarten Associate, Mrs. Dickerman regularly hosted charity teas and she was active in staging events at Bryn Mawr College where Honour studied.

Great Manhattan houses suffered a change of opinion in the middle of the 20th century, as wealthy New Yorkers preferred the convenience of luxurious apartments to the expense and upkeep of the aging mansions.  In 1945 the proud house at No. 6 was converted to nine apartments.

Upper class residents moved in, like British-born Captain Jefferson Davis Cohn, who had the remarkable distinction of being the godson of Jefferson Davis, President of the Confederate States of America.  Cohn was a stockbroker and owned a racing stable in France.  He died in his apartment here at the age of 70 in 1951.

During the 1960s the upscale salons of d’Argout-Ferguson, Inc., interior decorators were here. 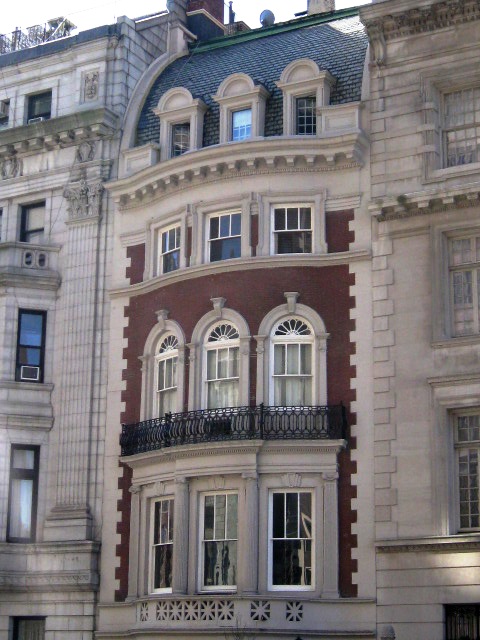 The building was renovated in 1980; with updates that included a “recreation room” in the basement.  But Frederick Gebhard’s handsome brick and limestone mansion at No. 6 East 79th Street remains unchanged from the street.   It is a striking stand-out on a street of remarkable mansions from a glittering period in New York social history.
Posted by Tom Miller at 3:31 AM