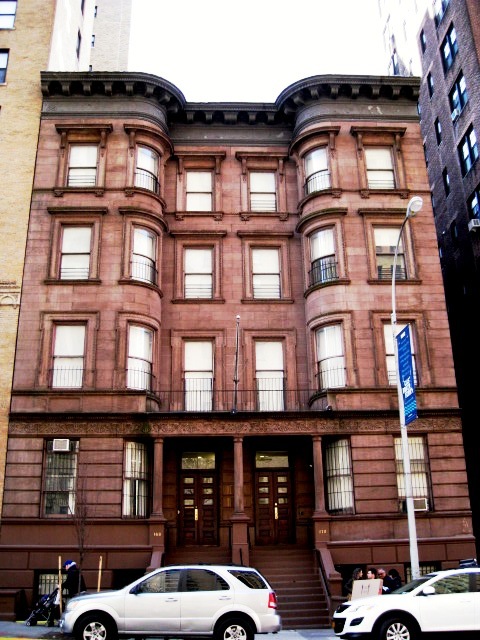 As the 19th century drew to a close, the Upper West Side was still in the flurry of development and building.  Central Park, improved roads and the introduction of the rapid transit lured middle and upper-middle class families to the area.  With the increased population came a need for schools and religious institutions.


In 1895 the Catholic Church opened the Blessed Sacrament Convent and its mirror-image Academy of the Blessed Sacrament at Nos. 168 and 170 West 79th Street, respectively.   The brownstone clad, Renaissance Revival structure reflected much of the residential architecture of the neighborhood.   A split stone staircase spilled to the sidewalk, terminating in brownstone walls that opened like outstretched arms.  Above the rusticated first floor an ornate carved frieze ran the width of the structure.

A deeply recessed portico was supported by three free-standing columns on plain bases, creating a balcony at the second floor.  The windows were all handsomely trimmed in carved brownstone frames and an overhanging pressed-metal cornice completed the design.


Along with the impressive entrance, the added touch of the softly curved corners of the projecting ends of the building set it apart from its neighbors.

The convent was home to nuns of the Sisters of Charity order and, in addition to the Academy next door, they ran the Academy of Mount St. Vincent on the Hudson upstate.     Graduates of this all-girl school came together in the 79th Street school on April 11, 1896 for the first meeting of the new alumnae association.  More than 100 women attended the meeting of the group founded a year before, on the 50th anniversary of Academy of Mount St. Vincent.


Both the convent and the academy served as meeting places for the Association for years to follow.


By 1909 there were sixteen Sisters of Charity involved with the Academy which was briefly run as a coeducational school.  That year The Official Catholic Directory and Clergy List showed 38 boys and 160 girls enrolled here.  That situation would not last long, however.   The school reverted to girls-only status relatively soon.


Archbishop, and later Cardinal, Hayes made it a point to officiate at the commencement exercises at the Academy until his death in 1938.  But an especially memorable graduation was held on May 30, 1931 when the exiled Grand Duke Alexander of Russia was in attendance.


By 1947 the Sisters of St. Ursula had taken over the property and moved the girls' preparatory Notre Dame School into the structure.  It had previously operated from the two brownstones directly behind, on 78th Street.  That year a young girl from a wealthy family in the Philippines enrolled here and would remain for two years.  Maria Corazon Sumulong Cojuangco would later marry Senator Benigno Aquino, Jr.   Corazon Aquino went on to lead the People Power Revolution in 1968 that toppled Ferdinand Marcos, restored democracy to her homeland and resulted in her presidency.


In the late 1980s the school moved to St. Mark’s Place and the Roman Catholic Archdiocese sold the buildings for $5.8 million in 1989 to the Fleming School.


The Fleming was founded by Douce Fleming Correa in 1956.  The school initiated a $4 million renovation that coupled the former convent and academy buildings, installed a gymnasium and updated the facilities. 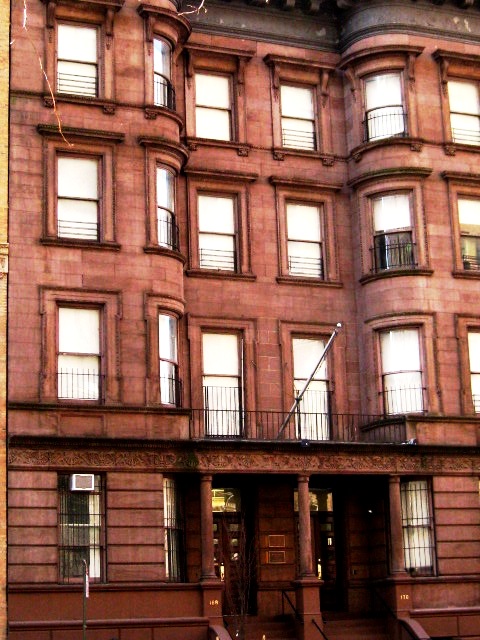 Only three years later the Fleming School filed for bankruptcy and the buildings were on the market again.


Today the remarkable brownstone buildings are the home of a Jewish day school run by Congregation Rodeph Sholom.

non-credited photographs taken by the author.
Posted by Tom Miller at 2:55 AM