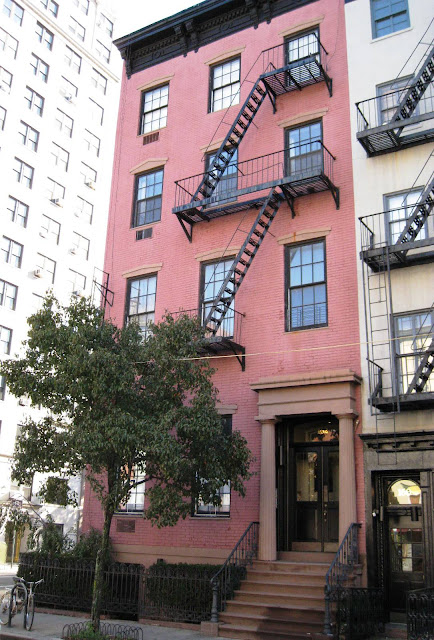 By the time the Civil War was over, James N. Wells had made a fortune in the real estate business, nearly single-handedly selling and developing the plots of land that had earlier been part of Clement Moore’s family estate, Chelsea.
Wells start out in real estate in 1819.  By 1833 he was living and doing business from the charming two-story brick house at 183 9th Avenue.  Two years later he completed a fine brick town house just around the block; over twice the width of the surrounding homes.  But Wells would move again to an even more impressive house.
The large Greek Revival brick residence at No. 162 9th Avenue, just down the street from his office, rose four stories over an English basement.  The understated brownstone lentils and modest cornice were eclipsed by the imposing entrance way.  Two stately fluted Doric columns flanked the heavy paneled double doors above a set of seven brownstone steps.  Wells’ house stretched back eastward on 20th Street, a distance amounting to at least one additional residential lot.
By the time the often-moving James Wells died on February 16, 1892 he was living at No. 12 East 42nd Street, just off the very fashionable Fifth Avenue.   Professor Joseph H. Gomien was living in No. 162 9th Avenue as early as 1884.  Gomien taught  music in Public School 64, was well-known as the organist for St. Peter’s Roman Catholic Church on Barclay Street, and by 1895 was giving musical instruction from the house.
Three years later Patrick H. Bird was living here.  In 1898 he was working for the New York City Docks Department and earning $1200 a year as a “Stenographer and Typewriter.”   It would be several years before typewriters (the turn of the century term for secretaries) and stenographers were mainly females.  Office work at the time was the bailiwick of men and women were still, for the most part, expected to stay at home.

In 1899 the Catholic Boys’ Association was formed.  Its purpose was “to keep boys off the streets at night, to offer them innocent amusements, and to bring them under refined and elevated influences,” according to the Proceedings of the National Conference of Charities and Correction that year.  For several years Bird administered the Association from his house.   It does not appear, however, that many of the boys were ever lodged in the Bird home, if any at all.
The stalwart widow Sarah Loomis was next to live here.  She was, in 1910, an officer of the Young People’s Prohibition League.   Sarah intended to achieve “The prohibition of total abstinence from all intoxicating liquors and the entire prohibition of their manufacture and sale.”
By 1919 the Yagnini family was living in No. 162.  In the politically-charged atmosphere born of World War I, anarchist uprisings and global revolutions, Peter Yagnini and his wife Mildred were documented Republicans.    Their son Phillip was registered as a Socialist.  The parlor and dining room of No. 162 9th Avenue were the scene of several intense political discussions, one might assume.
As the 20th century progressed, the unusually large residence was financially burdensome to maintain as a private dwelling.  In addition, while the Chelsea side streets remained still charming, 9th Avenue had taken a decidedly commercial turn.   The handsome house was broken into apartments and remains so today.
The striking Greek Revival house with its long list of interesting owners is beautifully preserved.  Its heavy, decorative iron fencing remains around the light moat to the basement.  It is an often overlooked beauty with an engaging past.

non-credited photographs taken by the author
Posted by Tom Miller at 2:25 AM