During the 1920s cafeterias and automats reached their height of popularity among working class New Yorkers. Secretaries and salesmen enjoyed inexpensive lunches in clean, attractive surroundings.

Wil-Low Cafeterias, Inc. ran twenty-two cafeterias in the city during this time.  A subsidiary of the organization was The Traffic Cafeteria Corporation.  The name came, most likely, as a reflection of the deliverymen and truckers whose patronage it sought.  “Traffic” during the first part of the 20th century also referred to the trucking industry.

In 1927 the corporation hired often-forgotten architect Abraham Fisher to design a new cafeteria and loft building at 163 West 23rd Street.  By now the area in what had been just two decades before The Ladies’ Mile—a fashionable shopping district—was a hodge-podge of commercial buildings and converted brownstones.   It was a bustling neighborhood ripe for a new lunch spot.

In designing what could have been a small, nondescript lunch room and office building Fisher outdid himself.  His resulting structure was six-stories of brown brick and terra cotta so creatively conceived and executed it demands attention.   Brick was laid out in a parquet-like diamond pattern; a large terra cotta panel announces the TRAFFIC BUILDING, flanked by terra cotta tiles with lush foliate designs; and two standing eagles perch atop the capitals of pencil-like swirling four-story columns.
If Art Deco was sweeping Manhattan at the time, it did not pay a visit to 163 West 23rd Street.  It was, as the AIA Guide to New York City would describe it nearly a century later, “a tapestry of brick and terra cotta.”

One of the first short-order cooks at the Traffic Cafeteria was Chick Gum.   On the morning of April 16, 1929 he caused an uproar when a customer asked for a plate of flapjacks.  Mr. Gum poured the batter into the hot, greased frying pan and, when the time came to flip the flapjacks, he gave the skillet a quick flick of his wrist.

Outside, Police Officer George Leonard heard a loud scream and rushed into the cafeteria with his pistol drawn.  There, in the kitchen, he found Chick Gum.  One of the scalding hot pancakes, rather than flip back into the pan, had dropped into the cook’s open shirt.

The unfortunate cook was treated at Bellevue Hospital and sent home.

The unhappy episode of the cook and the flapjack was the least of the cafeteria’s problems in 1929.   In the Spring of that year a city-wide strike by cafeteria employees threatened to put an end to the Traffic Cafeteria.  One morning in May about 15 union laborers entered the cafeteria around 11:30, just before the lunch rush hour.  The men threatened workers and prevented customers from entering.
Around the same time strikers destroyed dishes and furniture in the Wil-Low Cafeteria at 245 Canal Street.   Pickets forced The Traffic Cafeteria to close its doors and the League for Industrial Rights wrote in its 1929 “Law and Labor,” that “The Traffic cafeteria has remained closed, and business in other restaurants is being carried on with difficulty and their clientele is of course much reduced.”

The League described the methods used by the group.  “The course of conduct of the strikers has been such as to indicate the danger of injury to property,” thus intimidating the cafeterias to close rather than suffer expensive damage.
Magistrate Hyman Bushel was not pleased.  “These strikers have been conducting a reign of terror in the cafeterias of the city,” he told the court.  And Magistrate Weil railed “Men of your type are a real menace to the community.  You should be deported.  You have no respect for law and order.  This condition has got to be checked.”

The strike was over before the end of the year and in March 1930 the Traffic Cafeteria, Inc. purchased its building, which it had until now been leasing.

There would be more problems with the unions, however.  In 1933 the mob demanded that William Lowenstein, who owned the Wil-Low chain, pay “protection” money to keep the unions at bay.   The manager of The Traffic testified four years later that he paid a mobster named Kranz $2000.  After the payment pressure on The Traffic Cafeteria from Local 110 of the Amalgamated Food Workers Union abruptly stopped.
Not long afterwards, however, The Traffic Cafeteria ceased operation altogether.  In June 1942 the building was leased to the Comet Express Company.   From the mid-1940s through the 1950s Standard Phono Corporation, distributors and sellers of vinyl records, was here. 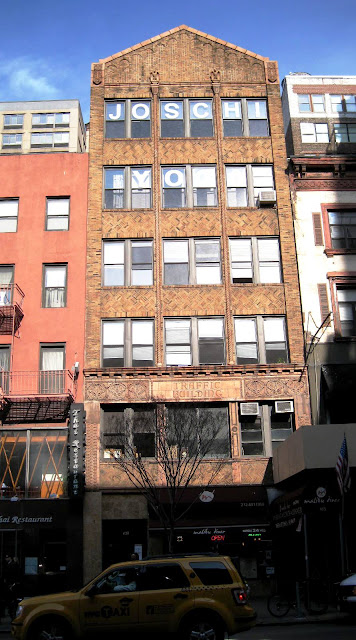 Today, appropriately, the first floor is home to a diner.  Unfortunately the street level has been completely obliterated; modernized with tacky stone tiles where once were decorative terra cotta and brick.  But above this, Abraham Fisher’s intricate design is wonderfully preserved.  A marvelous little building with so much detail that the passerby has to pause to soak it all in.

many thanks to reader Simone for requesting this post.
Posted by Tom Miller at 3:31 AM