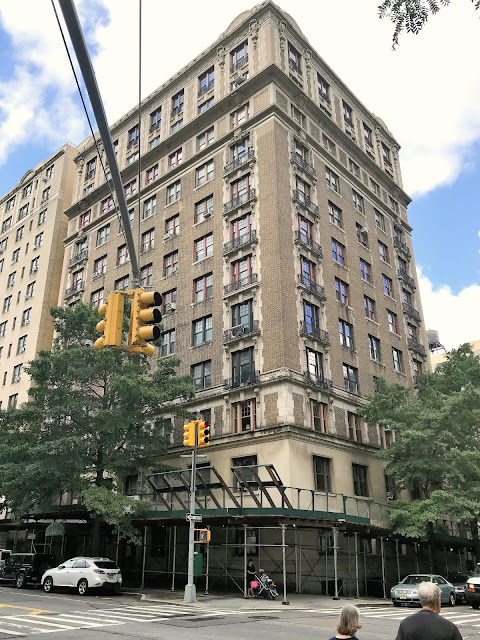 On June 22, 1912, the Record & Guide reported on "The Reconstruction of West End Avenue."  The writer commented, "Often it is said that thirty years, a single generation in time, spans the average economic usefulness of buildings in the path of metropolitan progress."  The life expectancy of sumptuous homes on West End Avenue, however, was in some cases half that long.  The article noted that "West End Avenue is well started on its second era of reconstruction" with modern apartment buildings replacing private homes.

In listing the staggering number of construction projects, the article said, "At 78th Street the Cambridge Construction Co. is just finishing an operation."  The 12-story apartment building had replaced five rowhouses.  It was designed by Schwartz & Gross in the Beaux Arts style, with notable hints of the new Arts & Crafts style.  A two-story limestone base supported ten floors faced in Flemish bond brown brick.  A series of intermediate stone cornices visually relieved the block-like mass, while the architects drew the eye upward by adorning the mid-section corner windows with iron-railed balconies and framing them in limestone.  Frothy Beaux Arts cartouches and carvings decorated the tenth floor and terminal cornices. 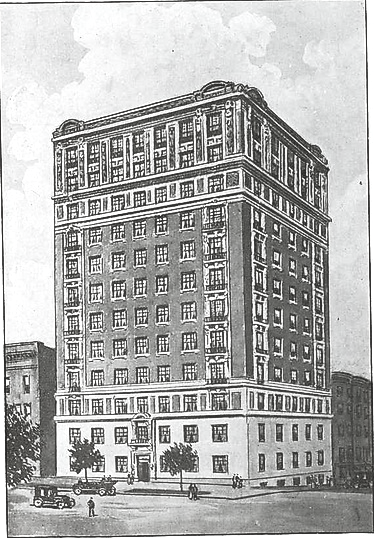 from the 1913 Supplement to the World's New York Apartment House Album (copyright expired)
There were just two apartments per floor, one with 8 rooms and the other with 9, each with three bathrooms.  The World's New York Apartment House Album said, "Excellent judgment has been used in the layout of each apartment to make the arrangement of rooms meet the demands of the most particular housekeeper."  Up-to-date amenities included "modern clothes dryers, water filter, laundries with patent steam doors, a private locker and storeroom for each tenant."  The brochure said the apartments afforded "each tenant the luxury and exclusiveness of a private residence." 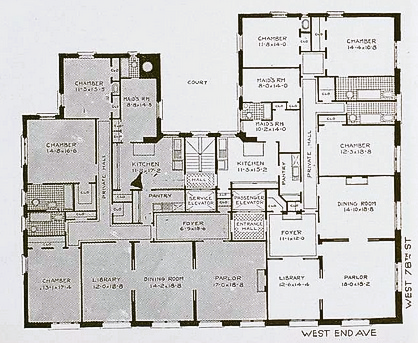 from the 1913 Supplement to the World's New York Apartment House Album (copyright expired)
For the most part, the well-to-do residents used their apartments only during the winter season.  They spent the warm months in country homes or resorts.  The summer house of retired commission merchant David Spero and his family was at Far Rockaway.  They closed it for the season on October 3, 1913, but just over a week later, Spero went back "for his golf sticks," according to The New York Sun.  He "found that 148 pieces of silverware, bronze ornaments and two blue bathing suits were gone."  The silverware was valued at $1,700, or around $48,000 in 2022.
The following Saturday, Detective Cooney was walking along Central Avenue in the neighboring village of Lawrence and noticed a young man wearing "under his coat one of Mr. Spero's blue bathing shirts."  David Murphy, who was 17-years-old, quickly confessed to the burglary, admitting "he and another carried the silverware away in four automobile suitcases they found in the house, and that before leaving they dined upon crème de menthe and sandwiches."  His confession led to the quick apprehension of his accomplice, 17-year-old Edward Seeley.  The New York Sun reported, "He too was wearing one of the blue bathing shirts."
The most intriguing resident of 375 West End Avenue was one of its first.  John Whipple Frothingham came from a prominent, old New York family.  The director of the Brooklyn Academy of Music, he maintained a country home in Tarrytown, New York.
Passionately concerned about an outbreak of typhus in the Balkins during the First World War, Frothingham formed, funded, and sent a group of American nurses and physicians to Serbia in 1915.  Among them were nurse Stephanie Hampl of John Hopkins Hospital in Baltimore, and her fiancé, Dr. John Kara.  Tragically, while working there, Kara "fell a victim to the dreaded disease," according to the New York Herald.
The following year Frothingham launched a second expedition to Montenegro.  Stephanie Hampl again volunteered for the trip.  The group of doctors and nurses boarded the Italian ship Brindisi.  The New York Herald reported, "On board the Brindisi also was stowed the 600,000 pounds of provisions and articles which had been shipped from Halifax for the relief of the stricken Montenegrins by Mr. John W. Frothingham."
On January 7, 1916, the Brindisi struck a German mine.  The New York Herald wrote, "The vessel sank in ten minutes after striking a mine, which rent her forward compartments and hurled from her decks and gaping cabins the mangled forms of more than one hundred persons."  Of the 420 passengers and crew, more than 300 were lost.  On January 21, 1916 The Chicago Daily Tribune reported, "Miss Stephanie Hampl, the betrothed of Dr. John Kara, has followed her fiancé to the great beyond."
The wealthy Frothingham's support to the Balkins was not merely financial.  Between 1917 and 1919 he worked in Serbia with the American Red Cross.  There he met Helen Losanitch, a Serbian nurse working to set up field hospitals.
Following the war, Frothingham returned to 375 West End Avenue and continued his philanthropy.  On April 2, 1920 The Yonkers Statesman reported that he had donated 18 acres to the village of North Tarrytown "for public park purposes."  He gave Tarrytown architect Walter D. Blair a five-year contract to oversee "the landscape gardening and construction of buildings."
Eight months later, on December 19, 1920 the New York Herald reported the "interesting engagement" of John Frothingham and Helen Losanitch.  The couple was married in two ceremonies on January 3, 1921--in St. Nicholas Russian Orthodox Cathedral in Manhattan, and in the Church of the Saviour in Brooklyn.  Two years later a daughter, Anna, was born.  The Frothinghams established the Frothingham Children's Institute in Serbia, as well as the Serbo-American Institute of Serbia. 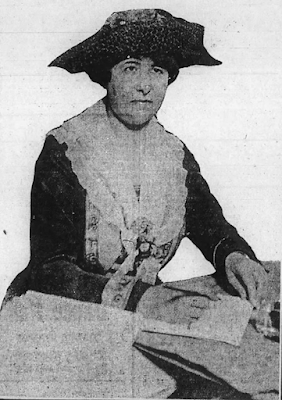 Helen Losanitch Frothingham, The Anaconda Standard, February 24, 1920 (copyright expired)
John W. Frothingham died in France on November 20, 1935, leaving a net estate valued at more than $37 million by 2022 standards.  Among the rare books in his library were a first edition of John Milton's Comus, a first edition of Milton's Paradise Lost, and a first edition of Edward Fitzgerald's Rubaiyat.  Helen continued the couple's remarkable work.  Shortly after her husband's death, with the outbreak of the Spanish Civil War, Helen established an orphanage in Guethary, France to care for war orphans.
In the meantime, the names of 375 West End Avenue residents regularly appeared in the society pages.  Among them were family of Theodore W. Stemmler.  He and his wife, the former Jennie Taylor Hunting, had five children, Theodore Washington, Lorraine Brevoort, Yvonne Randolph, Marcelle Ogden Post, and Adrian T.  It was Jennie and her daughters, of course, upon whom the social spotlight shone.  On October 20, 1916, for instance, the New York Herald announced that "The Misses Lorraine, Yvonne and Marcelle Stemmler...have had a series of teas and receptions for their young friends at their apartment, at No. 375 West End avenue.  Miss Yvonne Stemmler made her debut last winter after her return from school in Paris." 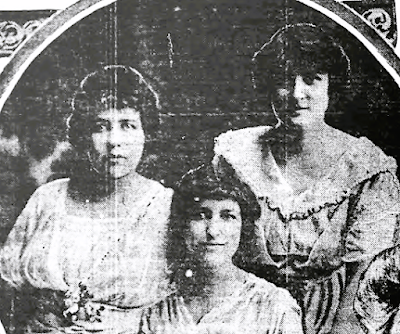 Lorraine, Yvonne and Marcelle Stemmler.  New York Herald, October 29, 1916 (copyright expired)
In October 1916 Emilie D. Lee Herreshoff (known to her friends at Mildred) quietly moved into an apartment here.  She had been living nearby at 620 West End Avenue with her husband, John Brown Francis Herreshoff, a wealthy metallurgical chemist.  But things were not going well with the couple.
Two years later the New-York Tribune reported, "The latest edition of 'The Social Register' shows that the couple have been living apart.  The address of Mrs. Herreshoff is given as 375 West End Avenue, while Mr. Herreshoff, with his son Francis, lives at 620 West End Avenue."  The next day the newspaper expounded, "John Brown Francis Herreshoff...said yesterday that although their homes were within a few blocks of each other, he had not seen his wife for two years."
Emilie's divorce suit was followed closely by the newspapers.  She alleged "misconduct with an unidentified woman at hotels in this city, this month and last July," according to the New-York Tribune.  The case came to court in June 1919.  Mildred told the court that her husband "in the latter years of their life together" had "displayed indifference toward her."  She blamed the marital troubles on a "woman with strawberry blond hair."
Because Herreshoff had been giving her $18,000 a year, Mildred asked for no alimony.  Five days after their divorce was granted, her former husband married the strawberry blond, Carrie Ridley Enslow.  She was his third wife.
Mildred's problems did not end following her divorce.  In November 1920 her automobile was stolen.  It became part of a corruption trial of two police officers in January 1921.  The two extorted money from insurance companies for the return of stolen cars, including Mildred Herreshoff's.
In December 1922 Herkimer, Inc. acquired 375 West End Avenue.  In reporting on the deal, The Daily Argus called it, "one of the finest apartment houses on West End Avenue."  The article said the buyers planned to convert it "into an apartment of co-operative ownership which has become so popular among the high-class apartment structures," adding, "This building which represents the highest advance in the builders' art, is admirably adapted for this purpose."  Indeed, it was; however the conversion would not come to pass for another seven decades.
Wealthy real estate operator Max Verschleiser lived here by the mid-1920's.  Born on March 14, 1868, he and his wife, the former Annie (known as Minnie) Margolies, had two sons and four daughters.  Son David worked in his father's business.
Verschleiser was a mover and shaker in the real estate community.  In January 1929 he paid $3.375 million for the 104th Field Artillery Armory, which engulfed the entire block between Columbus Avenue and Broadway, and 67th and 68th Streets.  According to The New York Times, he planned "a large sports arena and amusement centre" on the site.  Unfortunately for Verschleiser, the Great Depression halted his renovations and he lost the property in foreclosure the following year.
The building continued to be home to impressive New Yorkers over the succeeding decades.  Editor and publisher Archibald Seixas lived in 375 West End Avenue until his death in October 1953.  He had published and edited The Shipping Digest since 1923.
Dr. Henry Slonimsky and his wife, Minnie Tennenbaum, were residents by the 1960's.  Born in Minsk, Russia on October 9, 1884, he was brought to the United States in 1890.  After studying at Haverford College and the University of Pennsylvania, he did his graduate studies in philosophy and Greek at the University of Berlin and the University of Marburg, Germany.  He earned his Ph.D. in 1912.  Slonimsky's stellar academic career included lecturing in philosophy at Columbia University, teaching at Johns Hopkins University, and at the Hebrew Union College in Cincinnati.  He was dean of the New York School of Hebrew Union College-Jewish Institute of Religion until his retirement in 1952.
Another notable resident was theatrical designer S. Syriala (whose first name was Sointu, although professionally he used only his initial).  Born in Toronto in 1909, he studied at the National Academy of Design and the Boston Museum School of Fine Arts.  He designed the sets for productions through the 1930's through the 1950's, and was responsible for the restoration of the stage area of Ford's Theater in 1968. 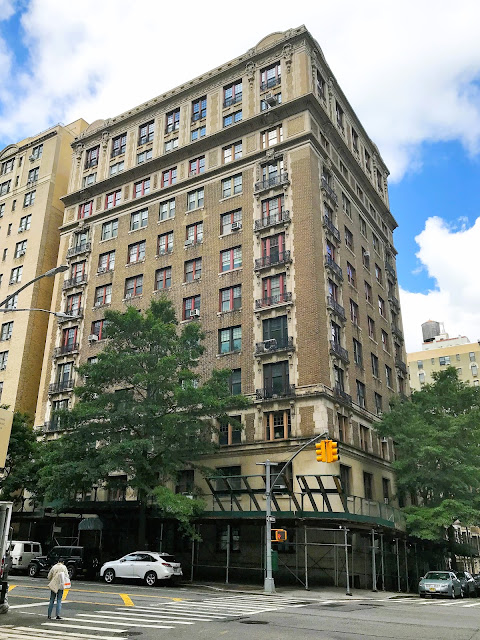 Exactly 70 years after its change to a cooperative was suggested, the conversion was accomplished in 1992.  The building that originally held 24 apartments now holds 47.
photographs by the author
LaptrinhX.com has no authorization to reuse the content of this blog
Posted by Tom Miller at 1:00 AM