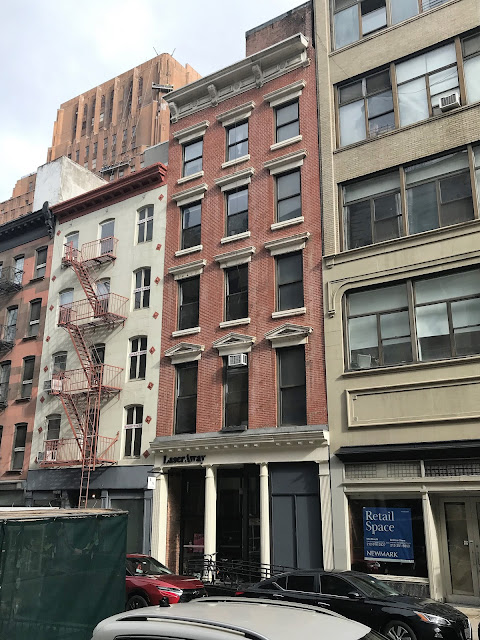 In 1835 the family of James Dunn, a grocer at 137 and 147 Anthony Street (later named Worth Street), lived in the 25-foot-wide home at 143 Duane Street.  In the rear yard was a smaller house, most likely the home of Andrew J. W. Butler, a "bill poster," who was listed at the address.  At the time, George Colgate lived about two blocks to the south at 158 Chambers Street.  The passing of two decades would bring remarkable changes to both neighborhoods.
As the population of New York City grew, the expanding commercial district pushed residential neighborhoods northward.  In 1856, the estate of George Colgate demolished the former Dunn property and began construction of a five-story commercial building.  Completed in 1857, the Italianate style structure was faced in red brick above the cast iron storefront, the Corinthian capitals of which have been sadly lost.  A pressed metal cornice with scrolled, foliate brackets crowned the structure.
The building filled with drygoods firms, Naef & Schaeppi, which advertised "silks and ribbons;" Richard Bell & Co., linens dealers; and J. & D. Clarke.  They were joined in April 1860 by Kellogg  & Tenbroeck, another drygoods firm, and in January 1862 by George B. Grinnell "dry goods commission merchant."
H. Hennequin & Company specialized in imported shawls.  After moving into the building in March 1869, it advertised its "new and choice stock" of items like "rich Paris printed and fancy spring shawls, Plain Thibet and Merino shawls--wool and silk fringes," and others. 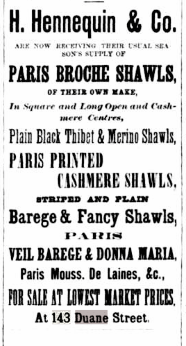 The Evening Post, April 10, 1871 (copyright expired)
By 1871 the ground floor was home to Edmund Mardaga's eatinghouse, or restaurant.  Among the first tenants in the upper portion not related to the drygoods business was Ghio & Rovira.  A. P. Ghio was born in Genoa, Italy in 1853 and came to New York City at the age of 14.  In 1883, at the age of 30, he partnered with another immigrant, Benito Rovira, "a young Spaniard," as described by Tobacco: An Illustrated Weekly Journal, to form the cigar manufacturing firm of Ghio & Rovira at 143 Duane Street.
Rovira had arrived in New York from Barcelona in 1872.  Tobacco later said, "Rovira's good judgment concerning tobacco, his ability as a factory superintendent and his success as a salesman on the road, caused Ghio to be eager to get Rovira for a partner."   The firm was highly successful.  A help-wanted advertisement in The Sun on June 10, 1884 read, "Tobacco filler strippers wanted at Ghio & Rovira's, 143 Duane st."  And, indeed, the company's growth was such that a year later it moved to larger quarters on 33rd Street.
In 1885 renovations, including a cast iron skylight, were made to the building by architect G. Joralemon.  Possibly, it was at this time that the lintels and sills were capped with the sheet metal coverings we see today.

Another tenant not related to the drygoods industry was the Indiana Paint & Roofing Co., which moved in around 1887.  As its name implied, the firm supplied builders with roofing materials and house paint, as well as household items like oilcloth and carpeting lining.  The firm remained here through 1891.

Carpentry & Building, November 1887 (copyright expired)
In 1893 only one drygoods merchant, "white goods" dealer G. K. Sheridan & Co., which occupied the fifth floor, was in the building.  The others were related to publishing.  Occupying the ground floor store as well as the fourth floor was paper dealer M. B. Belden.  The upper floor was used as his storehouse of paper bags and paper stock.  On the second floor was the German Clay Co., which, despite it's misleading name, was a publisher, and the third floor was home to S. Feinberg & Co., book importer and publisher.
Just after 6:00 on the evening of September 14, 1893, fire was discovered in S. Feinberg & Co.'s space.  The vast amount of paper and ink quickly created an inferno, which burned through the ceiling to M. B. Belden's paper storerooms.  Firefighters were able to extinguish the blaze, but because of the flammable nature of the building's contents, an insurance patrolman named Waddy was left on the premises overnight.  And, sure enough, several times throughout the night he discovered small fires that had reignited, which he put out himself.
Then, at around 4:00 a.m., another fire broke out on the fourth floor that spread too quickly for him to handle.  The New York Times reported, "He carried the alarm to the Franklin Street engine house, and when the firemen arrived at the building, the fire had obtained such headway that second and third alarms were sounded."
This blaze was worse than the initial fire.  At 5:00 the roof collapsed, "carrying with it the floors to the second story," said The New York Times.  When the fire was finally extinguished, M. B. Belden had lost everything.  He estimated his loss at $200,000 (about $621,000 in 2022).  The losses to S. Feinberg and the German Clay Co. were less, while damages to the structure were estimated at $373,000 in today's money.
As 143 Duane Street was being rebuilt, the neighborhood around it was becoming the center of Manhattan's shoe district.  The renovated building was almost exclusively occupied by boot and shoe firms, like Williams, Hoyt & Co., Carlisle Shoe Co., and Robert J. Boyd.  Non-shoe related tenants in 1898 were B. H. Sweet & Co., dealer in dressmaker supplies, and G. Mandelbaum & Co., which dealt in "toilet supplies."
In 1902, half a century after it erected 143 Duane Street, the George Colgate estate liquidated its holdings.  Title to the Duane Street building was transferred to Hannah Colgate.  Her tenants continued to be, mostly, shoe and boot firms.  Among them in 1909 were the shoe manufacturers A. Grossman and O. H. Kraeger.  They were joined in 1917 by the Duane Shoe Company. 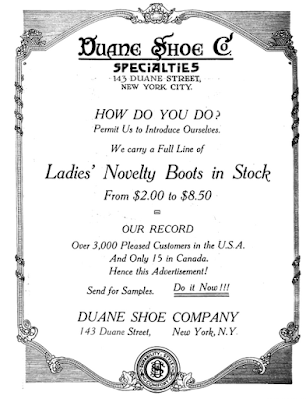 The Shoe and Leather Journal, June 1, 1917 (copyright expired)
The Duane Shoe Co. remained in the building into the 1920's.  Throughout the rest of the 20th century, the building continued to house similar businesses.  Then, in 1989, the transformation of Tribeca from gritty industry to artsy shops, galleries and residences resulted in a year-long renovation to 143 Duane Street.  Today there is one loft dwelling per floor above the commercial space.  And, although the cast iron capitals of the storefront have fallen away, the building retains its pre-Civil War appearance.
photograph by the author
LaptrinhX.com has no authorization to reuse the content of this blog
Posted by Tom Miller at 1:00 AM