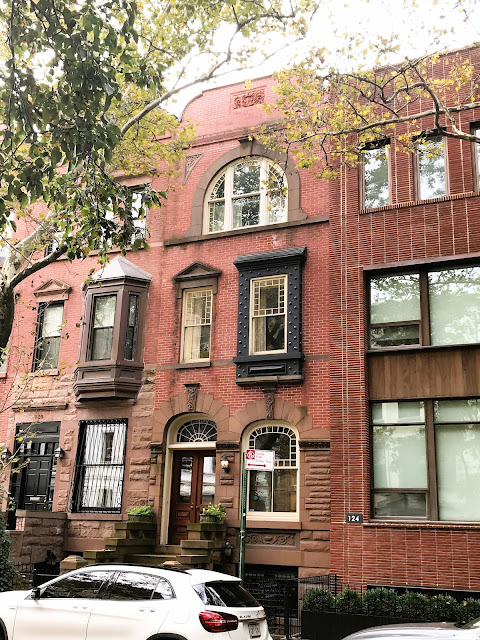 In 1886 developer William Taylor acquired a vacant 125-foot-wide parcel on the south side of West 88th Street, between Columbus and Amsterdam Avenues.  He gave his architect, Samuel B. Reed, a daunting task--to squeeze eight houses into a plot that would normally accommodate no more than six.  When construction was completed the following year, Reed had created a streetscape of charming, 15-foot-wide homes, no two of which were identical, but all of which combined into a pleasing composition.  Each had cost the equivalent of $267,000 in 2022 to erect.
For 122 West 88th Street, Reed dipped freely into a grab bag of historic styles.  A carved Renaissance Revival style panel sat below the arched Queen Anne parlor window, while a neo-Georgian fan light graced the entrance.  The parlor floor openings were crowned with beefy brownstone voussoirs and Romanesque Revival keystones.  The windows of the second floor vied for attention--one sporting a classical stone pediment, the other sitting within a slightly projecting metal, hooded frame decorated with polka-dot-like rounded bosses.  Separated by a brownstone bandcourse, the third floor featured grouped windows within a vast stone arch.  Above it, Reed forewent a cornice in favor of an Elizabethan-inspired parapet.
The house became home to the family of civic engineer William H. Grant.  Born in Neversink, New York on May 15, 1915, he had taken over the position of chief engineer in laying out Central Park, originally held by Egbert I. Viele, and had spent nine years as an assistant engineer on the enlargement of the Erie Canal.  He had recently returned to New York after working for the Federal Government, superintending the deepening and widening of rivers and bays in Maryland and Virginia.
The Grant summer home was in Ossining, New York, and it was there in 1896 that William H. Grant died.  The family had left West 88th Street about three years earlier.  By 1893 the family of James E. Childs lived at 122 West 88th Street.  The apparently busy Childs was vice president and general manager of the New York, Ontario & Western Railroad Company, president of the West End Cottages and Casino Company, vice president of the Ontario, Carbondale & Scranton Railroad Company, and a director of several corporations such as the Niagara River Hydraulic Company.
Although Childs retained possession of 122 West 88th Street, the family had moved to West 93rd Street by the turn of the century.  Childs would continue to lease the house, furnished, for over a decade. 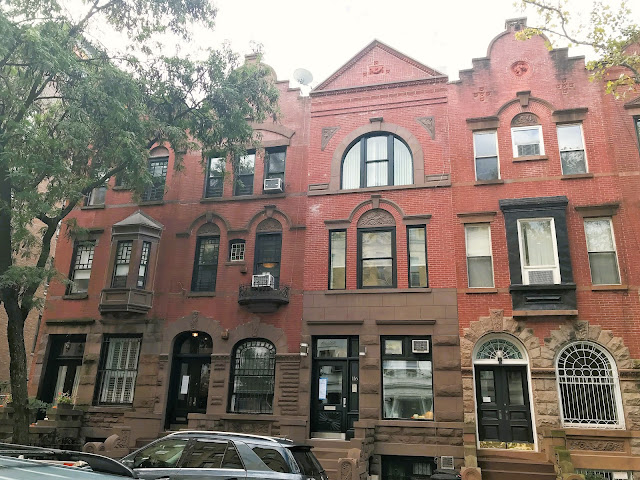 Other houses along the row demonstrate Samuel B. Reed's charming and playful jumble of styles.
Two of Childs's early tenants suffered heartbreak in the house.  Henry Goldberg was perhaps the first renter.  Living with him were his parents, Morris and Bertha.  Bertha died here on January 5, 1898 and her funeral was held in the parlor four days later.  Following the Goldbergs in the house were John T. Little, his wife, and widowed mother-in-law, Mary Dyer Buckbee.  Mary died in the house on September 4, 1900.  Once again a funeral was held in the parlor.
The rapid turnover of tenants continued.  In 1903 and '04 the Franklin family leased the house.  Jennie Franklin, a recent debutante, frequently entertained.  On March 1, 1903, for instance, the New York Herald reported, "Miss Jennie E. Franklin, of No. 122 West Eighty-eighth street, will entertain at cards on March 9."  And on December 4 the following year, the newspaper wrote, "Miss Jennie Franklin, of No. 122 West Eight-eighth street, is to entertain tomorrow afternoon the members of the Bridge Whist Club."
James E. Childs died on July 16, 1912.  One year later, on June 11, 1913, his estate sold 122 West 88th Street.  On August 10 an advertisement for the sale of the furnishings in the "handsome nine room house" appeared in the New York Herald.
The new owner operated 122 West 88th Street as a boarding house.  On September 23, 1913, an advertisement read: "Two girls wanted; one for general housework and plain cooking; one for chamberwork and assist waiting; private boarding house."
By the time Lillie Wilkin purchased 122 West 88th Street in 1920, it was a rooming house.  Among her tenants was Ethel Davis, who also went by the name Ethel Martinez.  Ethel ran a beauty parlor at 23 Manhattan Avenue.  She ran afoul with the law in 1921 and was sentenced to Welfare Island (today's Roosevelt Island) in September.  Eight months later she was released.  But she would not make it back to West 88th Street that day.
On May 16, 1922, The New York Times reported, "The dream of restored freedom of Ethel Davis, 30 years old, of 122 West Eighty-eighth Street...received something of a setback when she was rearrested as she was about to leave the island yesterday, at the expiration of her sentence."  During her incarceration, a customer, Mabel Tichenor, filed a complaint.  In September, right before Ethel's first arrest, she said, "she handed Miss Davis three rings while she was being shampooed, but only two were returned to her."  Mrs. Tichenor valued the missing ring at $600 (almost $9,700 in 2022).  Ethel was now arrested for that theft.
Tenant Lee Carrier, who rented a room in 1925, proved to be a tragic figure.  He had been a dancing master in Norfolk, Virginia, and moved to New York to further study dance.  A year later, things were not going well for him and on May 4, 1926, according to The Evening Post, he flung himself from Park Avenue to the New York Central tracks at 87th Street.  The fall did not injure him, however, so he "laid his head on the rails in the path of an approaching train and was killed."  He had given no impression to his landlord of being depressed.
Not all of the tenants, of course, brought unwanted publicity to the house.  Living here in 1934 was artist Roland Rolando, who worked with the Depression era Public Works Art Project; and in 1938 tenant Julie Naud gave playing card lessons from her apartment.  She advertised, "French conversation practice, new card game, 2 to 12 players, 2 sets, questions-answers; beginners, advanced. $1."
In 1969, 122 West 88th Street was converted to a two-family house, with a duplex within the basement and parlor floors, and another on the top two levels.  Then, a renovation completed in 2003 brought the house back to a single-family residence.
photographs by the author
no permission to reuse the content of this blog has been granted to LaptrinhX.com
Posted by Tom Miller at 1:00 AM