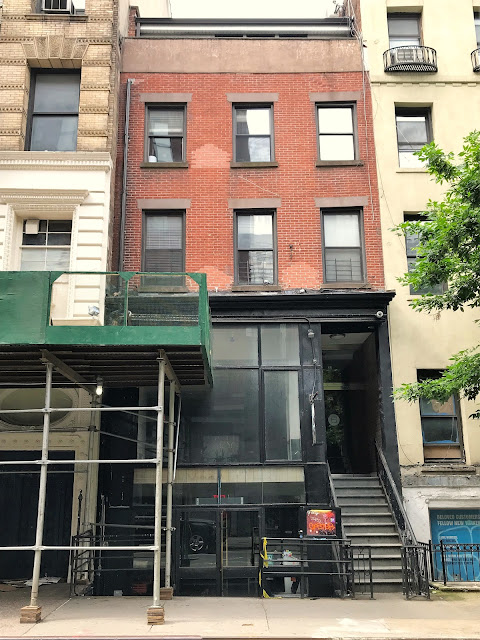 The 22-foot-wide, brick-faced house at 22 East 13th Street was completed around 1845.  Located midway between Fifth Avenue and University Place, it was just a block south of mansion-lined Union Square.  Three stories tall above a high English basement, its Italianate design originally featured a handsome entrance surround and a bracketed metal cornice.  It was home to the well-to-do Phillips family.  Lewis Phillips was secretary of the Manhattan Fire Insurance Company at 68 Wall Street, and Theodore F. Phillips operated a silk goods business at 29 Liberty Street.

When wealthy families relocated in the mid-19th century, it was common for them to sell everything in their former home and simply start over.  A household auction of the family's possessions was held on April 8, 1851.  The announcement noted:

The residence became home to the Jonathan L. Hyde family.  Living with the family was Jonathan's father, John E. Hyde, who had started the family business in 1825 at 22 Maiden Lane importing watches.  By the time the family moved into 22 East 13th Street, the name of the business had been changed to John E. Hyde & Sons (not to be confused with the contemporary watch makers John E. Hyde & Sons in London).  To further complicate matters, two of the sons were named Jonathan.  Working with their father were Jonathan L., Jonathan Joseph, and William H. Hyde.
The Jewelers' Circular and Horological Review later said, "The firm bought watches from several European makers which were stamped with their name and sold as Jno. E. Hyde & Sons watches."  Importantly, Jonathan Joseph convinced the high-end Swiss watchmaker Jules Jurgenson to make watches especially for the American market, for which the Hyde firm became its sole American agents.
There seems to have been problems within the Hydes' domestic staff in 1853.  An advertisement on April 12 read:

Wanted--By two young women, situations; one as chambermaid and waiter, or to do chamberwork and plain sewing; the other as seamstress; can cut and fit children's dresses.