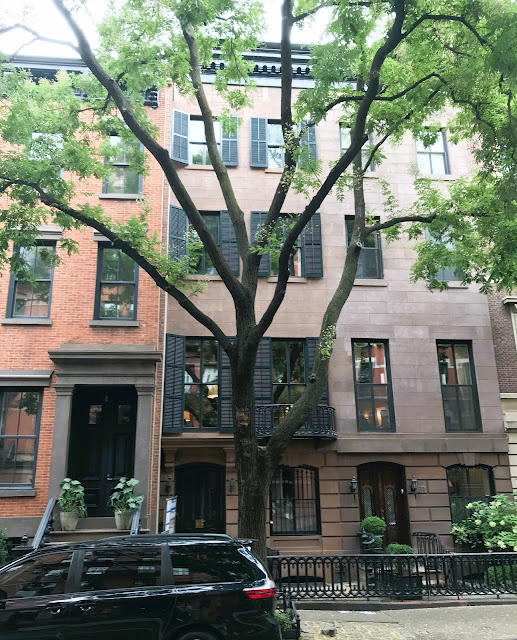 In 1854 George Hamilton Brodhead purchased the newly-built home at 41 Ninth Street (renumbered 53 West 9th Street in 1868).  One of a row of five, its Anglo-Italianate design was the latest in domestic fashion.  Just two bays wide, the house sat back on its plot (the same distance that would have been consumed by a stoop, were there one).  The Italianate areaway railing was copied in a rounded balcony at the second floor.  The double-doored entrance under a bracketed cornice sat within a rusticated base, while the upper floors were clad in dressed brownstone.
Brodhead purchased the house as an investment, initially leasing it house to Roderick Sedgwick and his family.  Born in Cornwall, Connecticut in 1785, Sedgwick was the son of General John Sedgwick and Abigail Andrews.  His wife, the former Margaret Stuart Dean, had died on March 13, 1850.  The couple had eight adult children.
Roderick Sedgwick was a broker at 60 Wall Street.  Two sons and at least two daughters lived with their father in 1855.  John was an attorney, and Roderick Jr. was in the drygoods business on Broadway.  The daughters ran a private school in the house, listed as The Misses Sedgewick's School.  (Another daughter, Katharine Whetton Sedgwyck, was married to the well-known artist William Heine.)
The Sedgwick family remained in the house until the spring of 1859.  In April that year, Brodhead advertised "The elegant first class four story" house for rent.  He would have a series of tenants over the succeeding years.  William McCauley, a "money broker," leased the house in 1860 and '61, followed by Edward Vonderheydt, a partner in J. W. Schmidt & Co., and then by merchant William Woodward, Jr.
Levi Chapman, who was in the strops (the leather strap for sharpening razors) business at 72 Duane Street, rented the house in 1873.  Only months (or weeks) after he moved in, on July 1 the parlor was the scene of his funeral.  He had died "suddenly," according to the New York Herald, at the age of 66 on June 27.  The term often suggested a heart attack.
The family of John C. Mabin leased the house in the mid-1870's.  They were nearly the victims of a burglar on March 4, 1876.  While the family slept, Police Officer Garney was making his rounds and heard the breaking of glass.  He discovered Thomas Wilson in basement area, where he had broken out a pane of glass in the door.  The New York Herald reported that Wilson "stated that he had neither home nor occupation," and was held in $2,000 bail.  (It was a significant amount, equal to $52,000 today, which Judge Kilbreath knew the homeless man could not obtain.)
Following his retirement from the brokerage business and after having leased the house for decades, George Hamilton Brodhead moved into 53 West 9th Street in the 1880's.  Born in 1815, Brodhead was the son of Rev. John Brodhead and Mary Dodge.  His wife, the former Julia Ann Phelps, had died in 1857 and of their four children, only two were still alive--Mary Frances Gardner, and Dewitt Williams Brodhead.  Dewitt and his wife, Ariadne Liebenau, moved into the West 9th Street house with George.
George Brodhead had been an important presence on Wall Street.  In 1855 he became secretary of the New York Stock Exchange, a position he held until 1870.  In 1874 he was elected president of the Exchange.  Dewitt Brodhead was a director in the Sixth Avenue Railroad Co.
On February 25, 1903 The Daily Saratogian ran the indiscreet headline, "Veteran Broker Dying," and reported, "George H. Brodhead, who was a well known figure in Wall Street fifty years ago, is dying at his home, No. 53 West Ninth street."  Because of Brodhead's long-standing influence in the brokerage business, his condition was followed by newspapers nationwide.  The 88-year-old died on March 2. The Colorado Springs newspaper The Weekly Gazette reported, "He had been ill three weeks and his death was due to heart disease."  His funeral was held in Newfields, New Hampshire where he was born.
Dewitt Williams Brodhead died in 1908, and the following year, on May 9, the New-York Tribune reported that the George H. Brodhead estate had sold the house to Arthur Brisbane, adding "This is the first transfer of this property in about fifty years."
Brisbane was a colorful and well-known figure.  Born in 1864, he had entered the journalism field in 1882.  He became a close friend of publisher William Randolph Hearst, and in 1897 became the editor of Hearst's Evening Journal.  Brisbane's summer home was in Hempstead, Long Island.
Brisbane was interested in experimental and scientific agriculture, and two years before buying the West 9th Street house, he had purchased the 600-acre deserted village of Allaire, New Jersey.  According to The New York Times on March 2, 1907, "he intends to make Allaire one of the finest model farms in the East." 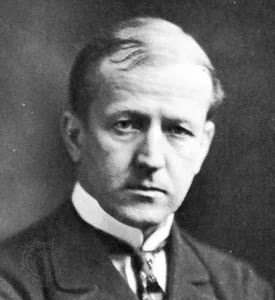 Arthur Brisbane, from the collection of the Library of Congress
On July 31, 1912, The Sun reported that Brisbane had married Phoebe Cary in Calvary Protestant Episcopal Church.  The bride was the daughter of Seward Cary.  The newspaper noted, "Mr. Brisbane and Seward Cary are cousins and grew up together in Buffalo."
The Brisbanes soon acquired another country home, in Point Pleasant, New Jersey.  It was the scene of a horrific incident on May 27, 1914.  The New York Times began its article saying, "Stretched at full length upon the floor of a blood-spattered bedroom in the unoccupied Riverside home of Arthur Brisbane, editor of the New York Evening Journal, the body of a murdered man was found this afternoon."  The house, which sat among a dense grove of trees, had been entered that afternoon by three men.  A local boy heard the voices of men quarreling coming from a second floor window.  "He thought at first they were workmen sent there by Mr. Brisbane," said the article.
When he mentioned it to his mother, she notified the caretaker who took two men with him to investigate.  The body of the dead man was found, surrounded by empty champagne and wine bottles from the Brisbane cellars.  Searching the grounds, the men discovered one man attempting to "induce two little boys to row him across the river," according to The New York Times.  He had two knives on him, one of which was covered in blood.  The third man was not found.  The article noted, "Both men were either tramps or burglars.  They had gained entrance to the house by removing a pane of glass from one of the windows."
In 1916 Brisbane began renting the West 9th Street house.  He leased it to W. A. Upham that year, and to artist Guy Pene Du Boise around 1920.   Du Boise had studied under William Merritt Chase and Robert Henri, and counted among his closest friends the artist Edward Hopper (who was best man at Hopper's wedding).
Du Boise had married Florence Sherman Duncan in 1911.  The couple had a daughter, Virginia Avis.  On June 5, 1921, the New-York Tribune reported that Virginia had been married to Edwin Earle Lucas "in the country home of the bride's parents, at Saugatuck, Connecticut."  The article noted, "The bride's father is a well known art critic.  He is editor of Arts and Decoration." 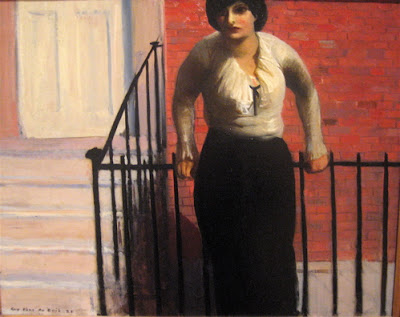 Guy Pene du Bois painted An American Oriental in 1921, while living at 53 West 9th Street.  from the collection of the Los Angeles County Museum of Art
In 1924 Du Bois and his wife moved to Paris.  Brisbane, who now owned more than 80 properties in New York City, continued to lease the house until his death on December 25, 1936.  His estate sold the property in 1938.
Living here in the late 1950's was psychiatrist Dr. Alice E. Fabian, the widow of Dr. Abraham A. Fabian.  On October 28, 1962, The New York Times reported that she had married David Lind.  "The ceremony was performed at the bride's home at 53 West Ninth Street by Rabbi Charles J. Davidson."   Tragically, David Lind died the following year and the twice-widowed Dr. Fabian slipped into metal illness. 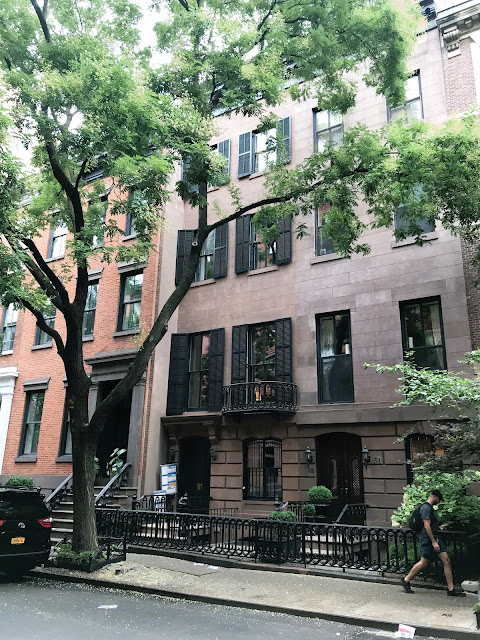 While she continued seeing patients in her second floor consultation room, she began hoarding elsewhere throughout the house.  Her detailed diaries revealed she "was convinced that she was not only being watched, but zapped by laser rays," according to the London newspaper Evening Standard years later.  Upon her death, Swedish artist Ann-Sofi Siden somehow obtained Fabian's journals, Polaroid photographs, and other belongings upon which she based her half-hour film, It's By Confining One's Neighbour That One is Convinced of One's Own Sanity. 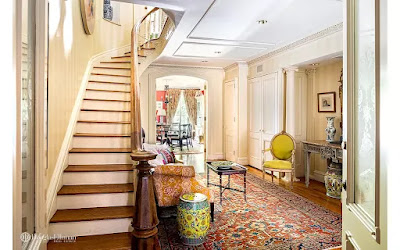 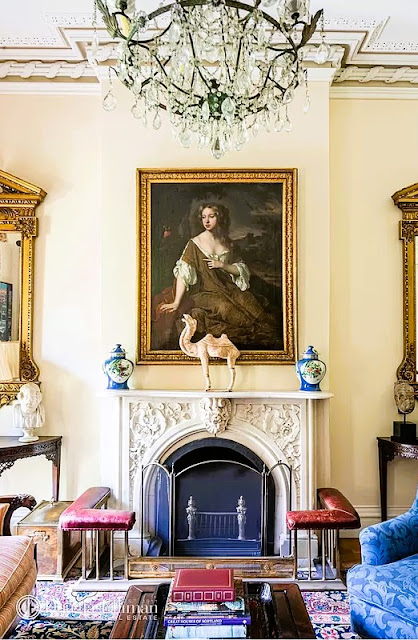 Much of the original interior elements survive.  images via streeteasy.com
The 16-foot-wide home with its absorbing history remains a single-family home.  Much of the interior detailing is pristinely preserved, looking much as it did when George Hamilton Brodhead purchased the home in 1854.
photographs by the author
no permission to reuse the content of this blog has been granted to LaptrinhX.com
Posted by Tom Miller at 1:00 AM