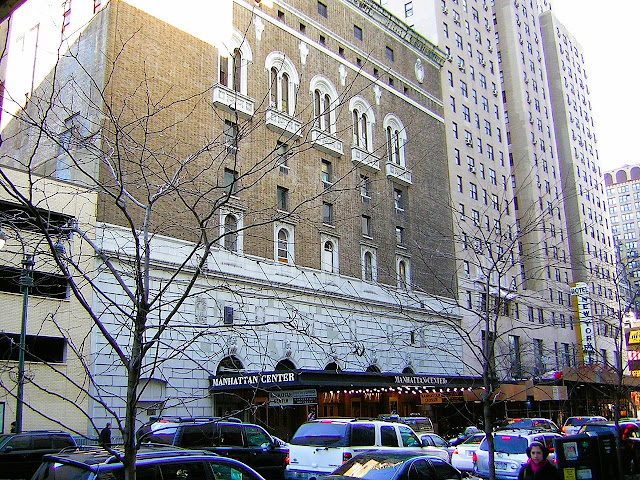 photo by Jim Henderson
Theater manager and impresario Oscar Hammerstein branched into grand opera when he erected his Manhattan Opera on Eighth Avenue near Broadway on November 14, 1892.  The critic of The New York Times was taken with its size.  "The new theatre is very large.  The stage was obviously designed for grand opera," he wrote.  But the cavernous auditorium had a drawback.  "The auditorium must be 100 feet deep...Last night, in the centre of the house, beyond the first four or five rows of seats, it was difficult to follow the speech on the stage," he wrote.
Eleven years later, Hammerstein sought to improve the situation.  In April 1901, his architect, William E. Mowbray, filed plans for a "five-story brick and stone theatre" three blocks away on West 34th Street, just west of Eighth Avenue.  Mowbray projected the construction cost at $300,00o--or about $10 million in 2022. 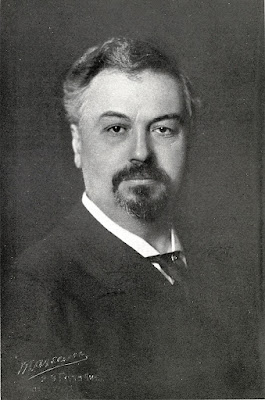 Oscar Hammerstein I, from Who's Who on the Stage, 1906 (copyright expired)
The new Manhattan Opera House would take five years to complete.  Hammerstein took advantage of the time to recruit the most talented and famous musicians and vocalists in the world.  Upon his return from Europe on April 29, 1906, he told reporters, "When I left New York eight weeks ago I concluded that if I could not create for my Manhattan Opera House an ensemble of such magnitude, artistically, as would eclipse every effort ever made in this direction since grand opera found a foothold in this country, I would abandon my project and give up the idea of giving grand opera for once and all."  The New York Times titled its article, "Hammerstein Declares War In Grand Opera."
Hammerstein had signed contracts with some of the most famous opera singers in the world for his opening season.  Among them were sopranos Nellie Melba and Gabrielle Lejeune-Gilibert, baritone Maurice Renaud, and tenors Alessandro Bonci and Amedeo Bassi.
The approaching opening of the Manhattan Opera House could not have come at a worse time for Hammerstein's rival, Heinrich Conreid of the Metropolitan Opera House.  The Metropolitan chorus singers had unionized, and on November 1, 1906, The Sun ran the headline "Conried Defies The Union."  It reported that he refused to sign an agreement.  The article ended saying, "Fifteen [singers] applied the other day to Oscar Hammerstein for engagements at the new Manhattan Opera House."
Construction was completed early in December 1906.  Mowbray's neo-Classical structure featured five double-doored entrances beneath a glass-and-iron marquee that stretched to the curb.  The seven mid-section bays were separated by Scamozzi pilasters, each window fronted by a stone balcony.  A classical pediment topped by a anthemion fronted the balustraded fifth floor. 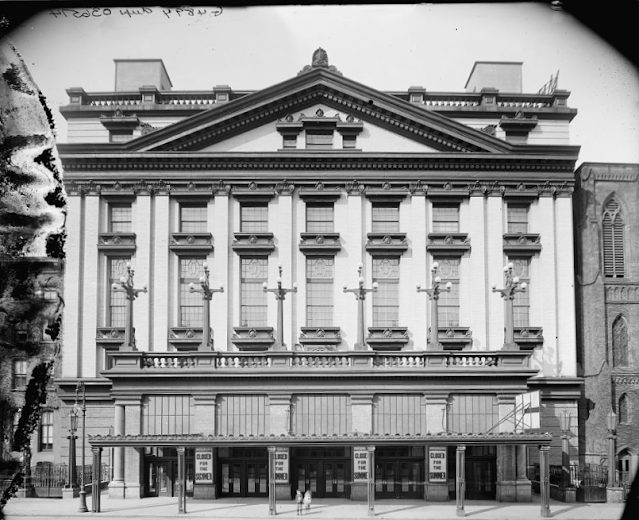 from the collection of the Library of Congress
The Manhattan Opera House opened on December 3, 1906 with I, Puritani, although the finishing touches on the building were not yet complete.  The New York Times reported, "Yesterday afternoon, Bonci, the new tenor, and Mme. Pinkert, the soprano, rehearsed with chorus and orchestra while some shifters set scenery and carpenters pounded the last nails.  The din was terrifying."  When Hammerstein held up a finger to stop the work, the foreman told him "We can't get this theater done unless we have every minute, and if we don't get the theater done, you can't give the opera."  And so the workmen continued.  "Bonci sang the rest of his high notes to a hammer accompaniment." 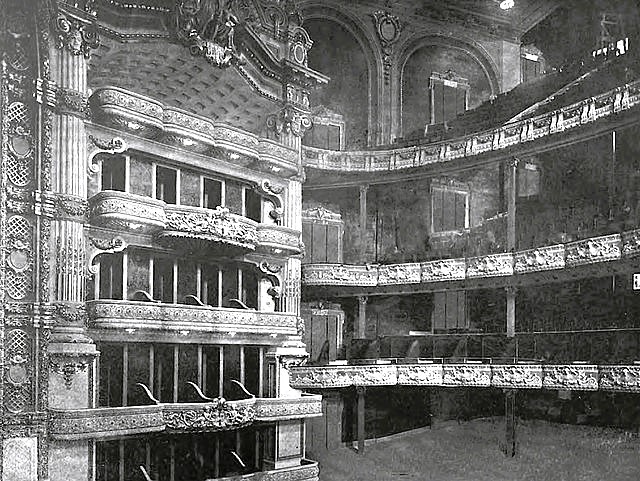 Architects' and Builders' magazine, February 1907 (copyright expired)
The New-York Tribune noted, "To Mr. Hammerstein alone the public is indebted for this new addition to its places of amusement.  He has no board of directors nor opera company.  He is the board of directors, impresario, real estate company, manager, treasurer.  Under his famous hat the affairs of the house will be entirely decided."
At the end of December, The New York Times critic Richard Aldrich deemed the Manhattan Opera "worthy of support," praising the excellence of Hammerstein's productions.  The problems of the former house had been corrected.  Aldrich noted, "Its acoustics are remarkably good.  Notwithstanding its size, it is so built that the audience as a whole is brought nearer the stage and into more intimate relations with what goes on upon it than is the case in the older houses."  The "older houses," of course, included the Metropolitan Opera. 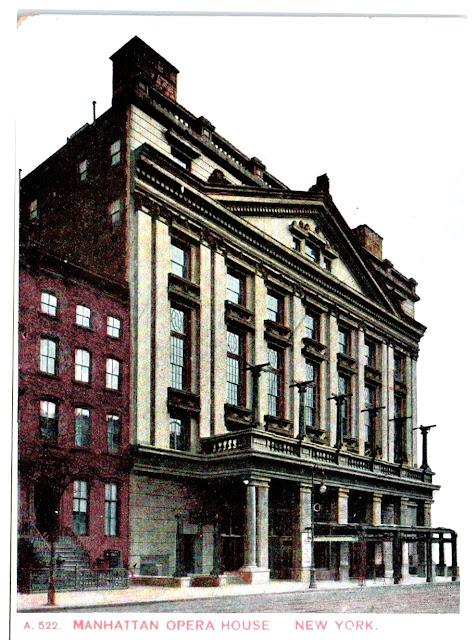 A postcard pictured the venue shortly after its opening.
The international fame of Nellie Melba was such that her debut here on January 11, 1907 caused a near riot.  That evening she appeared with Bonci in Rigoletto.  The New York Times reported, "The crowd was so large at the Manhattan Opera House last night...that it was necessary for Mr. Hammerstein to telephone to Police Headquarters at 7 o'clock for a squad to control the mob of people in the lobby."  The efforts were not enough.  The "crowd surged up the gallery stairs, breaking away the side railing.  At 7:15 the box office closed, and no more standing-room tickets were sold...In the course of the second act a woman fainted and was carried out."  The carriage man (the uniformed employee who met and opened the doors of arriving carriages) counted 510 vehicles that pulled up to the marquee that evening. Nellie Melba in the role of Ophelia.  from the collection of the New York Public Library
In 1911 Hammerstein leased the venue to Metropolitan Opera House chairman Otto Kahn.  The contract came with a massive $1.2 million bribe that Hammerstein not be involved in opera in New York City for ten years.  He used the money to erect the London Opera House, in London.  By 1916, the Manhattan Opera House was being managed by the Managing & Producing Co., Inc., headed by Alexander Kahn.  That summer the venue was "lavishly renovated," and it may have been at this time that a sixth floor was added. 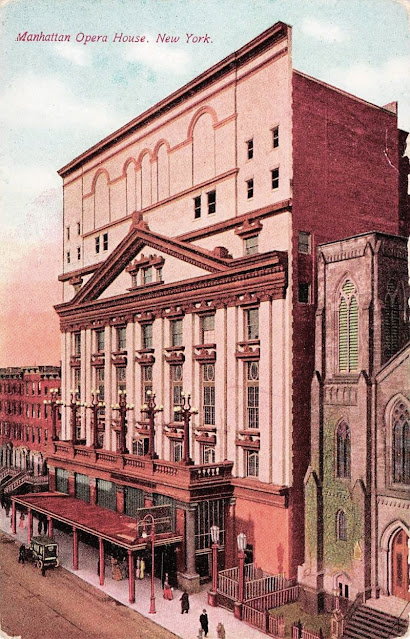 The upward enlargement created a bulky, disproportionate appearance.
Oscar Hammerstein died on August 1, 1919.  His wife Emma Swift Hammerstein inherited the Manhattan Opera House.  The venue continued to offer grand opera, opening with Aida that season, followed by La Boheme.  In 1921 Emma sold the building to her daughters, Stella H. Pope and Rose H. Tostevin.
Massive change came the following year.  On March 11, 1922, the Record & Guide reported that the sisters had sold the structure to the New York Consistory, Scottish Rite Masons, "who will use it as a temple after a few structural changes."  The New-York Tribune placed the price at $600,000--or about $9.7 million today.  The newspaper said, "It is the plan of the Scottish Rite Masons to leave the auditorium as it is and hold assemblies and ceremonies there.  Upstairs will be constructed rooms for a library, lounging quarters, banquet hall and kitchen."
If the organization's initial plans called for "a few structural changes," the board soon changed its mind.  On July 30, 1922 The New York Times reported that the Scottish Rite had hired architects Harrison G. Wiseman and Hugo Taussig to renovate the structure.  The "entire Thirty-fourth Street facade will be remodeled and stores added," said the article.  "A large assembly hall and banquet room will be constructed on the present roof."  The article said the assembly hall would be one of the largest in the city, capable of holding 1,200 diners.   The architects placed the cost of renovations at $250,000. The architects' rendering showed a hipped roof.  The New York Times, July 30, 1922 (copyright expired)
The use of the renovated building as a Masonic temple was relatively short-lived.  In 1927 Warner Brothers leased the auditorium space as a sound stage, and in 1940 it was converted to a meeting hall and multi-purpose venue, called the Manhattan Center.
The meeting hall was a favorite venue for political meetings.  A two-day mass meeting was held here on in 1942 to pressure the Government to release Communist leader Earl Browder from an Atlanta prison.  An announcement in The New York Age on March 28 urged, "Trade unions, fraternal societies, religious and young peoples organizations, send delegates to the National Free Browder Congress at Manhattan Center, 311 West 34th street, Saturday and Sunday, March 28-29." 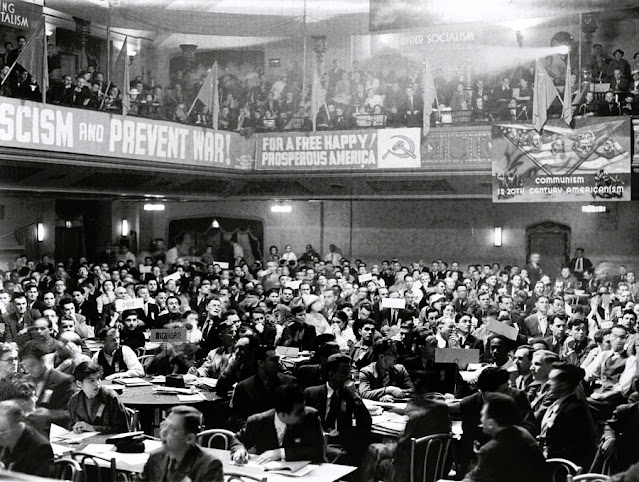 A banner at this National Communist Party meeting reads, "Communism is 20th Century Americanism."  original source unknown.
A somewhat surprising meeting was held here following the end of World War II.  On January 26, 1946, The New York Age reported on the "Rally for Democratic Japan" to be held on January 24, 1946.  It was sponsored by the Japanese American Committee for Democracy, which stressed, "Japanese who are sympathetic to American ideals must be used in reconstructing a democratic Japan."
The use of the Manhattan Center continued to morph over the decades.  The Manhattan Center Studios was organized in 1986 for multimedia events.  The group opened Studio 4 in 1993, with a cutting edge control room for recordings and live ballroom events.  Other studios followed, all connected to the Ballrooms and capable of recording the events there. photo by Tdorante10
The Manhattan Center continues to be house event, production and performance spaces.  And those passing by or even entering the building, can hardly imagine that it was once one of New York City's premier opera houses.
Many thanks to reader Rich Conrad for requesting this post
LaptrinhX.com has no authorization to reuse the content of this blog
Posted by Tom Miller at 1:00 AM