The Cojoined Houses at 16 and 18 Charles Street 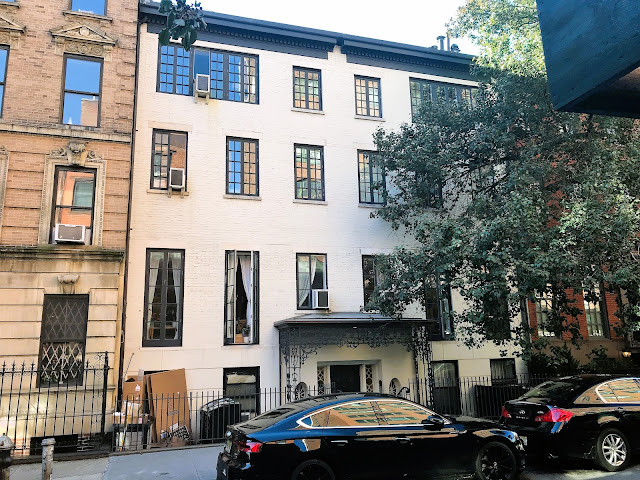 In 1845 banker Mynder Van Schaick partnered with builder Patrick Cogan to erect a row of 11 Greek Revival style houses along the south side of Charles Street, between Greenwich Avenue and Waverly Place.  Completed the following year, the identical high-stooped homes were three stories tall and three bays wide.
The widowed Sarah A. Williams purchased 16 Charles Street.  Living with her was the family of her son, broker Joseph C. Williams.  He was a partner with George Bird Grinnell in the brokerage firm of George Bird Grinnell & Co.
Coincidentally, the family living next door at 18 was named Grenelle--with a different spelling and no relationship to Joseph Williams's partner.  Thomas Grenelle was retired.  Living with him was his son, William Henry, who was a member of the brokerage firm Grenelle, Talman, Bibby & Co. on Pine Street.   A daughter, Mary Hobart Grenelle, was married to Oscar Hanks and lived in Troy, New York.
William Henry married Julia Porter Huntington on July 4, 1848.  The newlyweds moved into the Charles Street house, after which the population increased with the births of Julia Stuart in 1849 and Charles Frederick in 1855.
Mary and Oscar Hanks came for a visit in the fall of 1850.  While here, Mary fell ill and on the morning of September 15, she died.  Her funeral was held in the parlor two days later.  There would be another funeral in the house 11 years later.  Five-year-old Charles Frederick Grenelle died on June 11, 1861.
The Grenelle family left Charles Street around 1867, selling their home to their next-door neighbor, Sarah A. Williams.  It was the beginning of a long tradition of the two homes being owned the same family.  Joseph C. Williams now moved into 18 Charles Street.
In 1873 Williams suffered professional embarrassment when George Bird Grinnel & Co. failed.  He recovered, opening his own brokerage office, J. C. Williams & Co.  That business, too, appeared to be on shaky ground 11 years later.  On May 15, 1884, The New York Times reported, "Joseph C. Williams, a broker at No. 36 Broad-street, who suspended early in the day, has been on the Street over a quarter of a century."  A spokesperson from his office assured the reporter, "The suspension was only temporary and had been due to the decline of the market."  The associate was apparently correct, and Williams was back in business shortly afterward.
Following Sarah Williams's death, John C. and Annie E. Grasmuk purchased 16 Charles Street.  In 1903 they purchased 18 Charles Street from Joseph C. Williams and his brother, John H.  The couple sold both houses to brothers Joseph, Herman, Samuel and Louis L. Alterman in 1906.
The residences were purchased as investment properties.  In 1913 Agnes Muller leased 16 Charles Street, and by 1917 it was being operated as a rooming house by Jane Olcott.  Jane initially had more ambitious plans for the residence.  At the time, the concept of "Suffrage Cooperatives" had "invaded" Greenwich Village, as worded by The Sun on July 15, 1917.  Like-minded women bought shares of houses where they lived together affordably.  The Sun said that Jane Olcott "tried to start a cooperative house at 16 Charles street, but is now temporarily running it as a rooming house, because her plan was knocked out for the time being by a perfectly exhaustive streak of ill luck."
The article explained that one of her investors "got appendicitis and was carted off to a hospital, and another got a job in another town.  Another got married, another got aphasia, and still another got the sack, as it is called, at the place where she worked, and simultaneously got a letter from her father cutting off previous supplies and advising her to come home."  Undaunted, Jane accepted roomers while continuing to look for "a fresh bunch of co-ops."
The article noted:

Everyone in Greenwich Village knows Jane Olcott.  She is the round faced, soft voiced little Southern girl who keeps a perfectly respectable father down in Virginia in a state of perennial dread which is such that he opens his morning paper with bated breath, because he is always expecting to see that his daughter has been arrested and jailed for talking suffrage or birth control or socialism or pacifism from a soap box.

At the time of the article, America had been fighting in World War I for three months.  One Olcott's roomers, Walter Franzer, was summoned to the draft board on August 15 that year.  He proved to be less than a cooperative recruit.  The Sun reported that he "blandly announced his refusal to undergo the physical examination."   The article said he "wore the conventional Greenwich Village 'nut' tie, sport shirt, curly locks and most of the attire of the leisure class."  He told the board members, "I got your notice all right, but I guess I won't take your physical examination."
Despite the logical arguments presented to him, including the possibility of imprisonment, Franzer remained resolute.  His protest had nothing to do with pacifism, however.  His explanation suggested he would not do well within a military structure:

It's simply a whim of mine.  I haven't any objection to war if I can enter the way I want to.  I tried to enter the aviation service the other day, but they turned my application down because my name had been posted to appear for my draft examination.  You see I want to go to war my own way--I don't want anybody telling me when and how and just who I've got to fight.  I suppose you'd call me a personal objector.

In the end the 24-year-old was transported to the Tombs awaiting his case before the Federal Grand Jury.
Following the war, two brothers, Clem and Harry Kowolanko took rooms in 18 Charles Street.  They were on their way to White Plains, New York on May 9, 1919 when they stopped at the Kenmore Lunch in Mount Vernon, New York.  The brothers had been drinking, a dispute arose around 7:30 p.m., and a waiter called the police.  The pair was arrested for drunkenness.
At the station house Clem, who was 27, was found to be carrying a revolver, a violation of the 1911 Sullivan Act that outlawed the carrying of firearms in New York State.  He was liable to be convicted of a felony.  Clem explained that he had recently been discharged from the army and had worked at the ammunition plant in Camp Morgan.  The weapon was given to him by his sergeant.  His discharge papers showed that he had fought in France and was wounded and gassed on the Chateau Thierry front.  His record was enough to sway the judge.
Both were found guilty of intoxication and given a suspended sentence.  The judge then warned Clem not to carry a gun and spoil "the fine record he achieved in France."  He said, "You should honor it, remember that it takes years to accomplish things but only a short time to undo them."
In 1925 the Alterman brothers made stunning changes to the two houses.  The stoops were removed and perfectly symmetrical renovations resulted in vast studio windows on the top floor, a joint entrance at the former basement level and a graceful, cast iron canopy--almost assuredly salvaged from an Italianate rowhouse--installed.  The handsome neo-Georgian entrance with its leaded sidelights and flanking oval windows reflect the care and expense that went into the renovation. 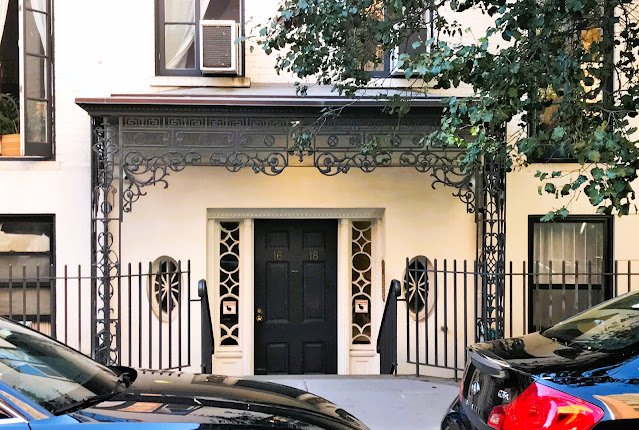 In the fall of 1934, 23-year-old poet and short-story writer Elizabeth Bishop moved into an apartment in 16 Charles Street.  Born in 1911 in Worchester, Massachusetts, she had recently graduated from Vassar College.  Although wealthy through inheritances, her writings dealt mostly with the working classes.  Bishop would go on to receive the 1956 Pulitzer Price for Poetry and to be called by Dwight Garner perhaps "the most purely gifted poet of the 20th century."
This portrait of Elizabeth Bishop was taken the year she moved into 16 Charles Street.  The Nineteen Thirty Four Vassarion, 1934.
The tenants were forced to leave their apartments on the night of June 6, 2003 after a three-foot-square portion of the foundation wall at 14 Charles Street collapsed.  The New York Times reported, "Fire officials entered the building around 8:15 p.m. and told residents to evacuate.  Of the 16 apartments, 12 were occupied and the Red Cross arrived on the scene to help the tenants find places to stay. 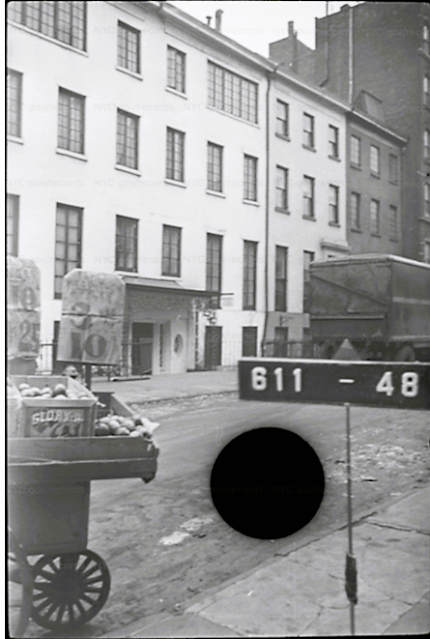 A fruit vendor's push cart sits across the street from 16-18 Charles Street in 1941.  image via the NYC Dept of Records & Information Services.
One of them, John Ford, told a reporter, "We're trying to figure out where we're going to live tonight.  We have no idea at this point."  Happily, the collapse of the adjoining foundation did not affect the structural integrity of 16 Charles Street and its occupants were soon allowed to return.
The unusually well done renovation resulted in a structure no less charming today than it was in 1925.
photographs by the author
no permission to reuse the content of this blog has been granted to LaptrinhX.com
Posted by Tom Miller at 1:00 AM