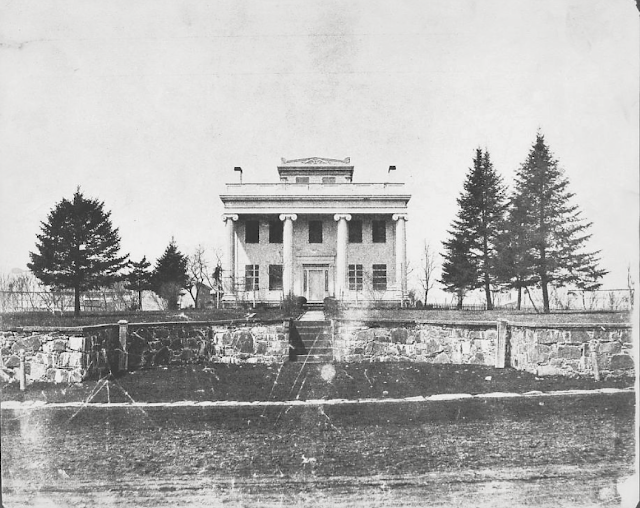 image from the Victor Prevost collection of the New-York Historical Society.
Born in 1785 in Glen Cove, Long Island, Valentine Mott came from a line of Quaker physicians.  Having graduated from Columbia Medical College in 1806, he traveled to London to study under the renowned Sir Astley Cooper.  So adept was the young doctor that Astley almost immediately made Mott assistant in surgery.  In 1809, at the age of 26, he returned to New York as a recognized surgeon.
Because he was ambidextrous, Moss was able to operate with either hand, an ability that contributed to his success.  He garnered international fame when he performed successful, never-before attempted operations on arteries, including his 1818 surgery on a tiny vessels just two inches from the patient’s heart. 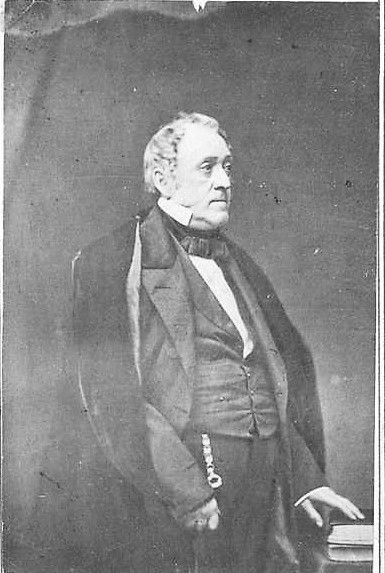 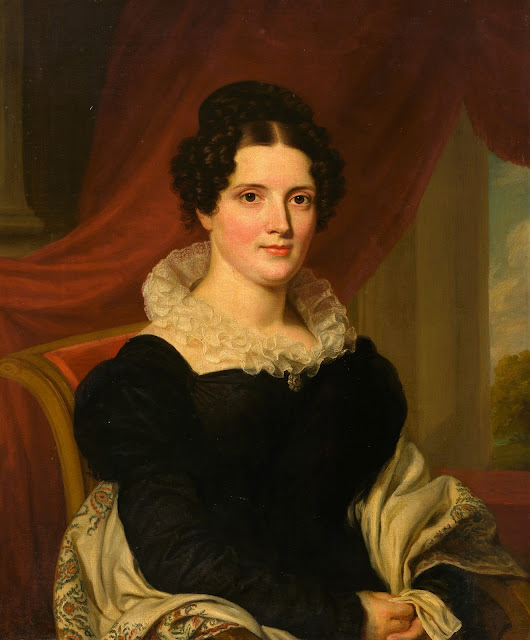 Louisa Dunmore Mums Mott, artist unknown, from the collection of the National Portrait Gallery
By the early 1830's Mott had garnered a substantial personal fortune.  Wealthy New Yorkers routinely maintained townhouses for the winter social season, and "country seats" for the summer.  The latter provided a respite from the stifling heat and conditions of the city during the hot months.  In 1833 Dr. Mott purchased land in the Bloomingdale district, north of the city, from Samuel Oakley, and a year later added to the property with land purchased by Thomas D. Carpenter.  The estate stretched from the Hudson River to today's Amsterdam Avenue, and from 93rd Street to 96th.

The estate, seen here in 1874 after building plots and roadways were laid out.  from the collection of the Museum of the City of New York.
The purchase was made for Louisa and the children.  In his biography, written in third person, he admitted, "The country, in fact, had no charm for him."  There was an existing house on the property, which the Mott family used for a decade.
During their father's many extended trips abroad, the children's tutor, Mr. Darling, aided Louisa in their care.  In 1888, Henry Mott recalled, "My father purchased [the] property on the 30th of April, 1833, and our family went that summer to Bloomingdale, and Mr. Darling was then with us...He was from that time in our family up to 1836, either as tutor or as guardian and proctor during my father's absence in Europe."
Two years after the family moved into their sumptuous town home at 1 Gramercy Park, Mott replaced the Bloomingdale house with a noble Greek Revival residence at approximately 94th Street and the Bloomingdale Road.  Set back from the road, its double-height Scamozzi columns not only provided a breeze-catching veranda for summer evenings, but gave the house a stately air.  Mott described it saying, "In 1846, he built, near the Bloomingdale road, an elegant and stately mansion, adorned with various kinds of trees and shrubbery, and surrounded with gardens, conservatories, and graperies, which he used as a summer retreat until the time of his decease."
The family was here during the summer of 1855 when Dr. Mott read an unsettling article in The New York Times:  "Dr. Valentine Mott, we are very sorry to announce, is quite ill of intermittent fever, at his residence in Bloomingdale."  Foreshadowing Mark Twain's famous letter about his own supposed death, Valentine Mott responded to The New York Times on July 31, 1855 saying:

I am happy to be able to contradict the rumor, and affirm that my health is very good...I find it necessary to make this statement, as the erroneous paragraph has found its way into several other journals and country papers.  By correcting this mistake you will oblige.
Yours respectfully, Valentine Mott.

With the outbreak of the Civil War, Dr. Mott dedicated his full attention to the war effort, offering his services to President Abraham Lincoln.  As consultant to the War Department, he gave advice on the administering of anesthesia in battlefield hospitals.  Through this work, he and the President became close friends.
The assassination of the President on April 16, 1865 deeply affected Mott.  Four days later Mott was bedridden.  On April 26, The New York Times ran a single-line article that read, "We regret to learn that Prof. Valentine Mott was taken suddenly ill on Saturday, and is not expected to recover."  The following day the 80-year-old died in his Gramercy Park mansion.
His death came at a time when the ambitious concept of extending Broadway northward to replace the Bloomingdale Road (for the most part) was in its formative years.  In 1868 the project had reached the Mott estate.  The dignified mansion sat squarely in the middle of the proposed road, known at the time as the Boulevard.  Years later, on January 22, 1910, the Real Estate Record & Guide would recall, that "the home of the celebrated surgeon, Dr. Valentine Mott...stood back from the river such a distance that it had to be moved to make way for the contemplated Boulevard in 1868."
The mansion was relocated slightly south, to the corner of 93rd and the Boulevard (i.e., Broadway).  In the move, the house was necessarily altered.  The veranda, removed in order to transport the house, was replaced with a Greek temple portico.  Where the cupola had sat, there was now a peaked roof.
It was here that Louisa Mott died on June 2, 1873.  The heirs began selling off the property in the following year.  On March 27, 1874, an auction of the mansion's contents was held at Robert Somerville's auction house at 74 University Place.  The announcement called it an "important sale of Valuable Furniture of the late Dr. Valentine Mott, removed from the Mott Mansion, Boulevard."  In addition to the furniture, Somerville sold the "massive mantel, pier and hall mirrors,"  as well as the chandeliers, carpets, "dining ware," and kitchen utensils.
At the time of the auction, The Children's Fold had been operating on East 58th Street for seven years.  The small, private orphanage under the supervision of Rev. Edward Cowley took care of around 34 children.  Horrors within the institution were uncovered in December 1876.  On January 15, 1877, The New York Times reported on an investigation that found "the children brutally beaten and maltreated."  Cowley, expectedly, was not only removed but jailed in the Tombs "under indictment for cruelty to his unfortunate wards," as reported in The New York Times on February 7, 1880.
Henry E. Pellew, in a letter to that newspaper on February 5, updated readers on the status of orphanage.  "The Children's Fold, under new management, soon recovered from its temporary difficulties, and under the administration of the Rev. Dr. T. M. Peters, in its new situation at Broadway and Ninety-third-street, has every claim to the full confidence of our citizens."  The "new situation" was the former Mott mansion. 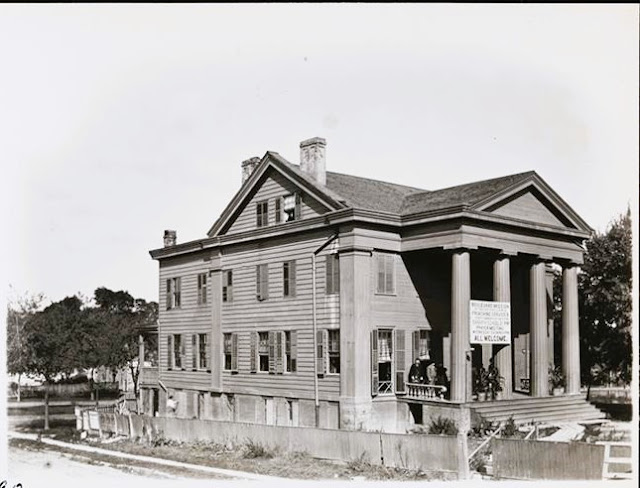 A sign noting "All Welcome" hung on the pillars of the remodeled portico after the Mott house became a mission/orphanage.  from the collection of the Museum of the City of New York.
By 1885 the orphanage had grown considerably.  A notice requesting donations in The Evening Post on December 18 read, "The Children's Fold:  The ladies of the Fold desire to make a merry Christmas for their 160 children."
For some reason, an arsonist attempted to destroy the orphanage in the summer of 1895.  In the middle of the night on August 21, a dog barked at a man in the yard.  "This aroused the inmates and the man decamped," said The Press, which reported, "A bundle of rags soaked with kerosene were found...under the steps of the Mott mansion, at the northeast corner of Ninety-third and Western Boulevard.  Burnt matches were found, also, near the steps."
At the turn of the century, what had been bucolic countryside was a bustling neighborhood of homes and shops.  The stately, if timeworn, Mott mansion survived until around 1903 when it was replaced by the Beaux Arts style Hotel Narragansett, and the Advent Lutheran Church. 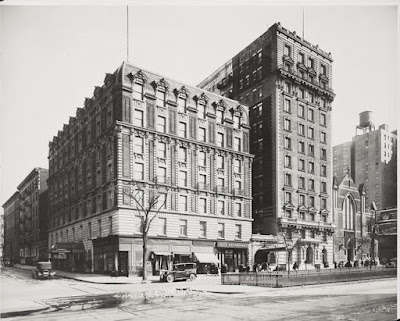 The Hotel Narragansett (center) and the Advent Lutheran Church (right) sit on the site of the Mott mansion.  photo from the collection of the Museum of the City of New York
no permission to reuse the content of this blog has been granted to LaptrinhX.com
Posted by Tom Miller at 1:00 AM