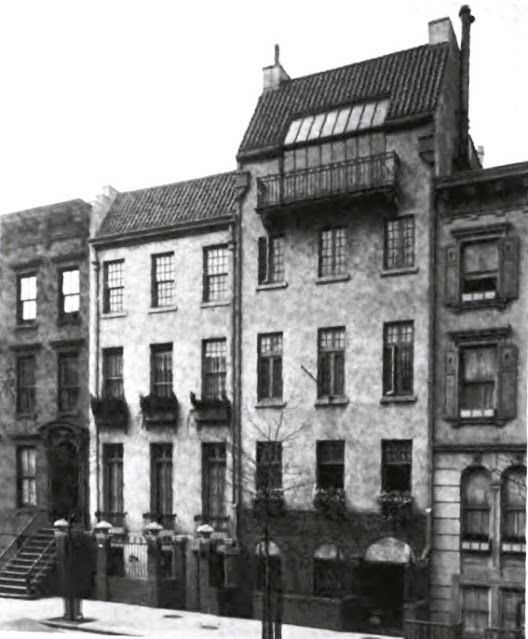 The Draper house is to the right.  At left is another Sterner transformation, the J. J. Magee residence at 166 East 63rd Street.  Architecture magazine, May 5, 1918.  (copyright expired)

The wedding of Dorothy Tuckerman, the only daughter of Paul and Susan Minturn Tuckerman, to Dr. George Draper on September 14, 1912 was a socially important affair.  The ceremony took place on the piazza of the Tuckerman's Tuxedo Park mansion.  The New York Times said, "A special train conveyed many of the guests to and from town."  Among them were some of the most prominent names of New York society--Minturn, Alexander, Chanler, De Rham, Stuyvesant, Pinchot, Pyne, Iselin and others.  The article noted "After a bridal trip Mr. and Mrs. Draper will live in New York."
At the time, Frederick Junius Sterner had caught society's attention.  The British-born architect had arrived in New York from Colorado in 1906 and purchased a 19th century brownstone on East 19th Street.  He transformed it into a Mediterranean-style villa with a stuccoed facade and red tile roof.  By 1911, the block was filled with Sterner's fantastic renovations--Tudor and Gothic along with Mediterranean--earning it the nickname "The Block Beautiful."
That project completed, Sterner turned his attention to the Lenox Hill neighborhood of the Upper East Side.  In April 1915, Architecture magazine noted “Mr. Frederick Junius Sterner, architect, has started an ideal development of a group of old houses facing on East 63rd Street, New York.  Mr. Sterner’s intention here is to change the exteriors of these houses in East 63rd Street on the same principle that he followed in his development of East 19th Street…Mr. Sterner believes that the interior of a living place should be primarily the thing to be considered, the exterior coming about because of the interior requirements.”
Sterner purchased eight old brownstones between Second and Third Avenues.  He combined and remodeled two for his own use, and sold the others to moneyed clients.  One of them, 164 East 63rd Street, was purchased by George and Dorothy Draper.  (The house had been home to the well-known builder and developer Patrick Farley in the 1870's and '80's.)  Sterner placed the cost of the renovations at $15,000, or just under $420,000 in 2022.
The transformation was completed the following year.  Shorn of its stoop, the entrance was now just below the sidewalk.  An understated service entrance matched the proportions of a window in between.  The ground floor was veneered in brick and the openings wore arched, tile-filled tympani.  Sterner stuccoed the upper floors and removed the Victorian lintels.  A double-height fifth floor was added for Dorothy Draper's studio.  Here a long, iron-railed balcony fronted the vast studio window that continued upwards into the red tiled roof. 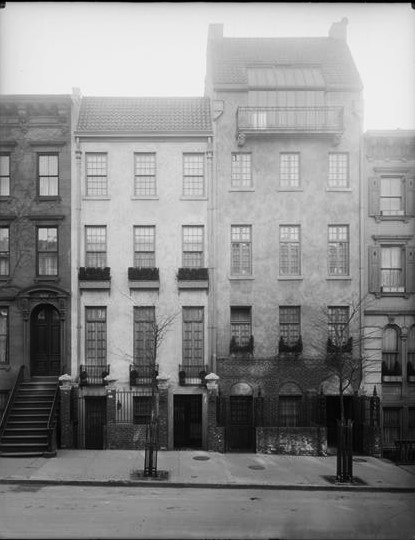 from the collection of the Museum of the City of New York
George and Dorothy Draper would have three children, Diana, George T., and Penelope.  Prior to their marriage, Draper had been affiliated with the Rockefeller Institute for Medical Research.  He later wrote that his new marital status "necessitated starting the practice of medicine, for browsing in academic halls, though entertaining, was not productive of much support."  He became an assistant attending physician to the Presbyterian Hospital and an instructor at the College of Physicians and Surgeons. 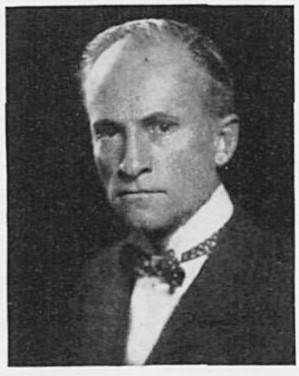 Dr. George Draper (original source unknown)
Dorothy had had a privileged childhood.  Among her ancestors were Oliver Wolcott, a signer of the Declaration of Independence; and her great-grandfather, Robert Bowne Minturn, who had founded a shipping empire.  Dorothy's parents owned not only the Tuxedo Park estate where she was married, but a Manhattan townhouse and a Newport cottage.  Her early education was at home, taught by her governess and tutors, before spending two years at the prestigious Brearly School.
The large studio space on the top floor was a necessity for Dorothy.  Since her marriage, she had decorated the Draper homes with such style that society friends asked her to do the same for theirs.  With northern light flooding in, she worked on her trademark designs--robust colors and oversized prints.  She was a pioneer of the style called Modern Baroque and, later, the Hollywood Regency style. 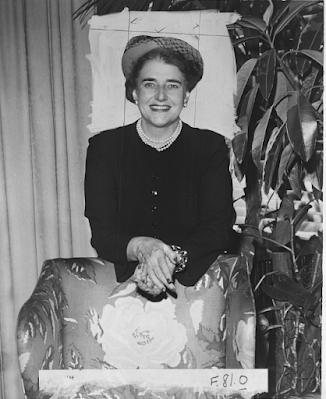 Dorothy Draper, later in life, leans on a chair upholstered in one of her large-print patterns.  from the collection of the Library of Congress
Her success in decorating friends' homes (along with their encouragement) prompted Dorothy to open the Architectural Clearing House in 1925, credited by some as being the first professional interior design firm.  She changed the name to Dorothy Draper & Company in 1929.
On August 10, 1921 lawyer and future President Franklin Delano Roosevelt first showed symptoms of polio at the family's summer home in Maine.  Because Eleanor Roosevelt and Dorothy Draper were first cousins, the family was well acquainted with Dr. George Draper, who was by now considered an expert on poliomyelitis.  On September 15, after a 24-hour trip by train and boat, Roosevelt was admitted to the Presbyterian Hospital under the care of George Draper, who would remain Roosevelt's personal physician.
Things seem to have already been growing tense in the Draper household by now.  The couple leased the house for the 1919-20 winter season to Aileen Tone.  She used the Dorothy's studio for a musical reception on the evening of January 6, 1920.  Some of Manhattan's social elite heard Mlle. Mona Gondre's singing of 17th and 18th century songs.  The New-York Tribune reported, "Among the guests were Mr. and Mrs. H. H. Rogers, Mr. and Mrs. Henry James, Mr. and Mrs. Chester G. Burden, Mr. and Mrs. Howard Potter, Mrs. Le Grand Griswold and Miss Hare."
George's brother, singer Paul Draper, used the house after Aileen Tone.  He and his wife, Muriel Sanders, had two sons, Paul and Raymond.  While living here in 1921, Draper wrote, "I have appeared as soloist with all the important orchestra in Europe and America and have given many recitals."
Next, investment banker Maurice Wertheim and his wife, the former Alma Morgenthau, leased 164 East 63rd Street.  The couple had three daughters, Josephine, Barbara W., and Anne Rebe.  Their summer estate, Wyndygoul, was in Cos Cob, Connecticut. 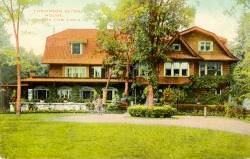 An early postcard depicted Wyndygoul, the Wertheim estate formerly owned by Ernest Thompson Seton.
Shortly after the Wertheims moved in, a grisly discovery was made at Wyndygoul.  On September 8, 1921, The New York Times reported, "Within a few hours after she had wandered away from Blythewood Sanitarium on the Stanwich Road here, the body of Mrs. Albert Biggs, a prominent resident of Memphis, Tenn., was found in a lake on the Maurice Wertheim estate at Cos Cob."  The troubled woman had filled her pockets with stones to weigh her down, and walked into the pond to her death.
In December 1922 the Drapers sold 164 East 63rd Street to the Wertheims.  Eight years later George and Dorothy Draper would divorce.  They would separately leave lasting legacies in their fields. 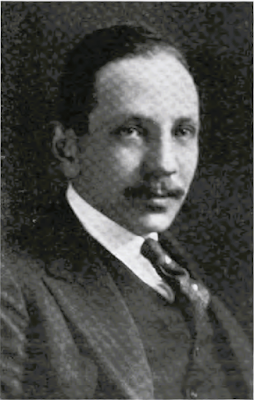 Maurice Wertheim, Bankers Magazine, January 1, 1922 (copyright expired)
Maurice and Alma Wertheim filled the 63rd Street house with a magnificent collection of modern art.  Among the paintings lining the walls were works by masters like Cezanne, Gaugin, Manet, Matisse, Monet, Renoir, Picasso, Van Gogh and Toulouse-Lautrec.  Alma was particularly interested in and collected the works of Georgia O'Keefe.  She and Maurice were supporters of The Intimate Gallery on Park Avenue, a venue opened by O'Keefe's husband, photographer Alfred Stieglitz in Decmeber 1925 to exhibit her works.
Perhaps equaling his passion for art was Maurice's love of chess.  An amateur chess player, he was president of the Manhattan Chess Club and in 1941 would finance the U.S. Chess Championship match between Samuel Reshevsky and I. A. Horowitz.  He later convinced the State Department that a chess match between the United States and the Soviet Union would help defrost the Cold War, and personally paid for the costs.
By then, however, the Wertheims had been gone from 164 East 63rd Street for years.  Their marriage ended in divorce in 1929. 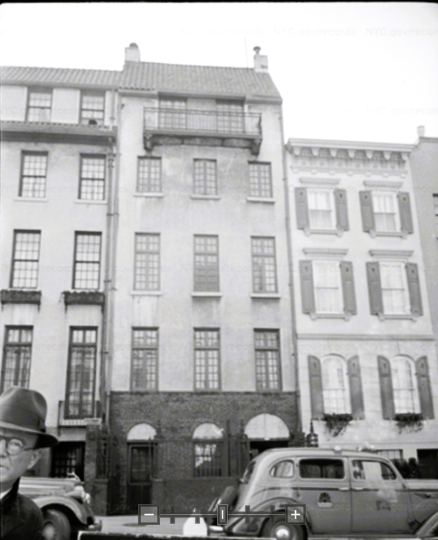 Sometime after the Wertheims purchased the house, the top floor was renovated and the studio eliminated.  via the NYC Dept of Records & Information Services
On April 27, 1939, Adelaide Sedgwick Munroe was married to Prince Kyril Scherbatoff in the Russian Orthodox Church of Christ the Savior on East 121st Street.  The New York Times called it a "double crown service, with its traditional ritual and customs."  At least half of the wedding party was titled.  Adelaide's only attendant was the Grand Duchess Marie, and the best man was Prince Paul Chavchavadze.  The New York Times reported, "Ushers were Prince Alexis Scherbatoff, brother of the bridegroom; Prince George Scherbatoff, a cousin; Walter de Mumm, Prince Vladimir Eristoff, Nicholas Holmsen, Alexander Cochrane Forges, Angier Biddle Duke and Alexander Hamilton."  According to the New York Sun six years later, the royal couple were living at 164 East 63rd Street.
In 1958 all the houses from the corner of Third Avenue to, and including, the former Draper house were demolished to make way for a 20-story apartment building designed by Emory Roth.  Completed the following year, the Beekman Townhouse survives. 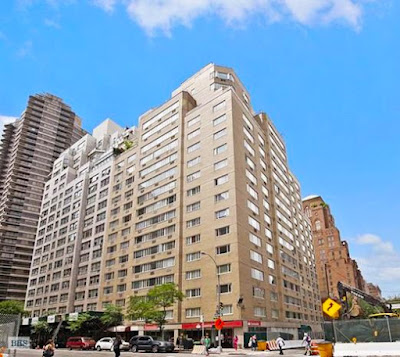 image via bhsusa.com
many thanks to reader Doug Wheeler for prompting this post
no permission to reuse the content of this blog has been granted to LaptrinhX.com
Posted by Tom Miller at 1:00 AM