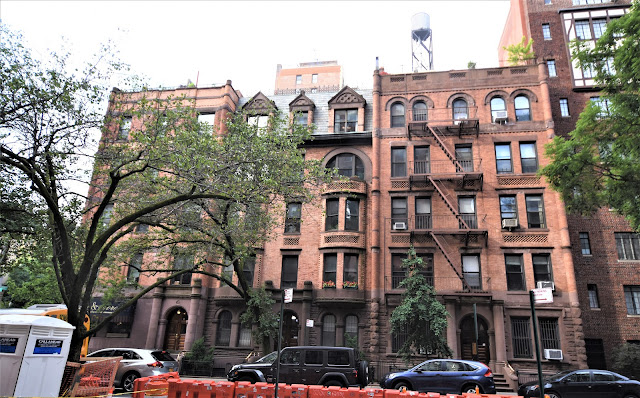 On March 29, 1890 the Real Estate Record & Guide reported, "Bernard S. Levy will build three five-story Tiffany brick and brown stone flats on 78th street, southwest corner of 10th avenue, with stores on the avenue, at a cost of $225,000."  The construction cost would equal more than $6.5 million today.  (Levy had already been busy along the block, having erected 15 row houses designed by Raphael Guastavino, including Levy's own home, a few years earlier.)

The structures were completed the following year.  At 35-feet-wide the corner building, 200 West 78th Street, was five feet wider than 202 and 204.   Their brawny Romanesque Revival design included brownstone bases where the entrances above short stoops were flanked by medieval-inspired columns and carvings.  Romanesque gave way to Queen Anne on the upper floors in the form of spandrel panels laid in dog-toothed brick patterns.  The end buildings rose to brick parapets, while 202 West 78th Street terminated in a slate-shingled mansard with brick and stone dormers and lacy iron cresting. 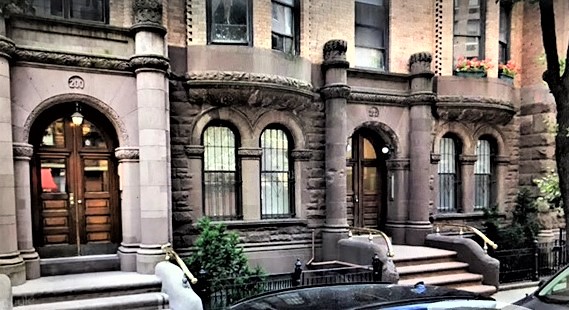 Levy sold the structures to William H. Vrendenburg in August 1891.  He advertised the apartments as having "attractive prices" and noted, "steam heated; door attendance; hardwood throughout; tiled bathrooms."  The spacious apartments of seven to eight rooms included parquet floors, and built-in buffets in the dining rooms.  Rents ranged from about $1,400 to $2,385 per month in today's money.
The apartments filled with professional tenants.  Among the initial residents were architect Henry Ives Smith; former president of the New York State Bar Association, Edward C. Whittaker; and Clark and Helene S. Bell.
The Bells were a fascinating couple.  Clark Bell was described by Who's Who in America as a "medico-legal jurist, author, editor, judicial historian, farmer and breeder, publisher [of the] Medico-Legal Journal."  He was counsel for several railroads and president of the New York Infant Asylum and the Medico-Legal Society.
Helene S. Bell was also an attorney.  She was, as well, a manger of the maternity section of the New York Infant Asylum at 61st Street and Amsterdam Avenue, and was chairperson of the executive committee of women managers of the Hahnemann Hospital.  The couple would live at 200 West 78th Street into the 20th century.
Other early residents were William Tyler Bliss and his wife, the former Elizabeth Mary Sturtevant.  The couple lived in 204 West 78th Street.  Bliss was born in London on November 26, 1865.  He graduated from Amherst College in 1897 and married Elizabeth two years later.  He was managing editor of the New York Mail and Express.  Elizabeth Sturtevant Bliss was an accomplished artist and a member of the Association of Women Painters and Sculptors.
By 1910 authors Albert Payson Terhune and his wife, Anice, lived in 200 West 78th Street.  Born in 1872, Albert was the author of The Great Cedarhurst Mystery and other works.  Anice was both an author and a composer.  Among her books was the Home Musical Education for Children.  The couple lived here well into the 1920's.
Joseph Gardam was president of the William Gardam & Son machinists firm.  When his behavior became erratic in 1902, the 52-year-old was confined to the Kings Park Insane Asylum for about four months.  The New York Times later noted, "Soon after regaining his liberty Mr. Gardam gave over the actual management of the business to his son, but he continued to work at the shop."
Although Gardam's professional work remained excellent, his eccentric behavior re-emerged in the summer of 1904.  On July 20 The New York Times reported that he "was taken from his home at 202 West Seventy-eighth Street, at 4 o'clock yesterday morning to the psychopathic ward at Bellevue, suffering from hallucinations."  It seems that it was not necessarily visions that concerned the family, but finances.  "Dr. Wilgus said that Mr. Gardam had a mania for spending large sums on dinners for acquaintances, and that he had once laid out an extravagant amount of money on a yacht," said the article. 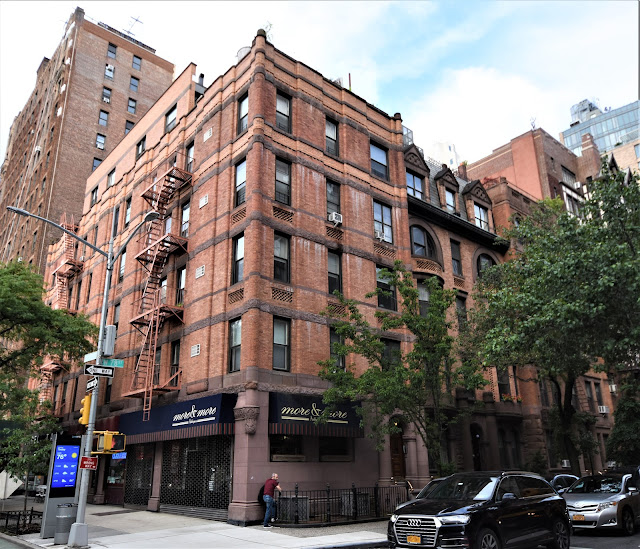 Bridget Hare and her brother, Daniel, shared an apartment in 204 West 78th Street in 1915.  They were two of a family of 16 children in Tuam, Ireland.   Daniel and another brother, Patrick, came to New York City in 1909.   It is unclear when Bridget arrived in America.  (Patrick Hare lived at 212 West 69th Street.)
In 1915 the Hare's father, William, was seriously ill and Bridget headed home aboard the RMS Lusitania.  She would never see her father or family.  On May 7, when the ship was just 11 miles off the coast of Ireland, it was torpedoed by a German U-boat.  Among the 1,198 fatalities was the 31-year-old Bridget Hare.
Retired businessman George Fields attended the first game of the 1928 World Series on October 4.  The excitement of the afternoon proved to be too much for his heart, however.  Upon returning home, he collapsed in the hallway of his apartment and died before medical help could arrive.  The Daily News attributed his death to "a heart attack, brought on by the excitement of witnessing the first game of the World Series."
Like many of the residents in the West 78th Street buildings, Anton Myslivec had a country residence.  His was in Medford, Long Island.  But unlike his neighbors, he had a murky past, having been sentenced to six months in 1925 on a charge of wounding a woman with a shotgun, and in 1927 he was sent to Sing Sing prison for attempted kidnapping and extortion.  Now, on November 22, 1938 police arrived at his apartment in 202 West 78th Street to arrest him for first-degree murder.
William Dobitz, a builder, lived with his wife Elizabeth, in Farmingdale, Long Island.  The night before Myslivec's arrest the 55-year-old Dobitz was shot dead as he whistled for his dog, Rex, in his back yard.  Before he died, Dobitz told police "he had no known enemies and could not understand why any one should wish to kill him."  Elizabeth, however, had an idea who the killer was.  She admitted to investigators "she had been friendly with Myslevic."
Myslivec denied any knowledge of the incident.  But, then, after failing a lie detector test he admitted to shooting Dobitz.  He explained he bought the shotgun as a present for Dobitz and as he was adjusting it while approaching the house, it "suddenly discharged."  The jury in his murder trial five months later did not buy his alibi.  On April 18, 1939 Myslivec was sentenced to die in the electric chair. 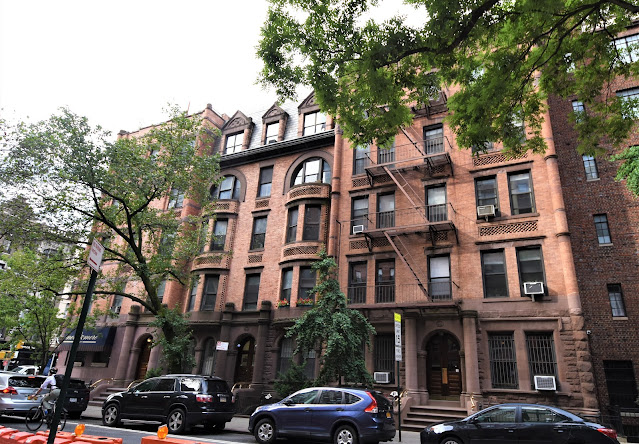 Throughout the decades and changing architectural tastes, the three remarkable buildings managed to survive essentially intact.  Today there are four apartments per floor in 200 and 204, and just two each per floor in 202.
photograph by the author
LaptrinhX.com has no authorization to reuse the content of this blog
Posted by Tom Miller at 1:37 AM