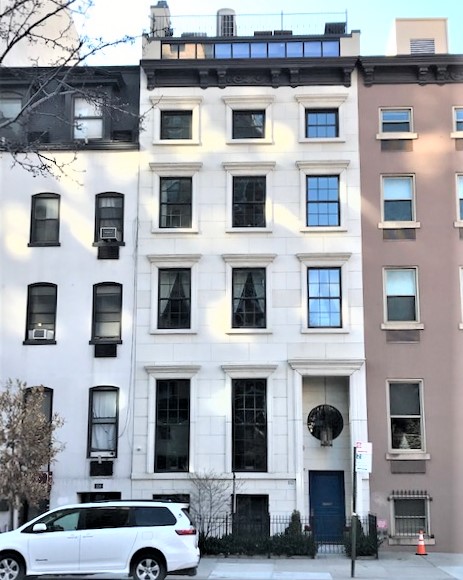 In the early 1850's costly residences were being erected along West 23rd Street between Eighth and Ninth Avenues.  Among them were the identical 25-foot wide Italianate style homes at Nos. 328 and 330.  Four stories tall over high English basement, the brownstone-faced houses featured floor-to-ceiling parlor windows (most likely fronted by cast iron balconies), molded stone lintels, and identical cast iron cornices.  Rather than arched pediments upon foliate brackets, so expected in the Italianate style, the arched double-doored entrances were capped by prim cornices.  The short attic floor was a remnant of the diminishing Greek Revival style.

No. 328 was home to the John Ward family by 1859.  Ward was a paper maker while son Richard listed his profession vaguely as "foreman."  The family moved on in 1861, selling the house to William M. Bliss, president of The Tenth National Bank of New York.
On October 22, 1861, not long after the family moved in, their dog wandered off.  An advertisement in the New York Herald on November 3, 1861 offered a $5 reward for its return.  It was a compelling incentive, equal to about $150 today.
The family would remain in the house through about 1865, during which time son Carlton M. Bliss attended the Columbia College School of Law.
No. 328 next became home to Emanuel Boas, a partner in the banking firm of C. B. Richards & Boas, and steamship agent.  Born in Prussia in 1823, he came to New York as a young man.  When news spread in 1848 of the discovery of gold in California, the young immigrant jumped into action.  The New York Times later described his adventure:

Mr. Boas and several others started at once for San Francisco, where they arrived safely after a perilous journey across the Plains, the greater part of which was performed on foot.  He met with success in the Golden City, of which he was thus one of the earliest pioneers, and when he returned to New-York, in 1856, to become a partner with Mr. Richard, he had already accumulated a considerable fortune.

Emanuel and his wife Therese had six children, three of whom, Hilda, Leontine and Arthur E., moved into the 23rd Street house with their parents.
Like their predecessors in the house, the Boas family would not stay particularly long.   On September 23, 1876 the Record & Guide reported that they had sold it to Charles and Margaret M. Spear for $26,000--about $640,000 in today's money.
A wealthy merchant, Spear dealt in fertilizers at No. 58 West Street at 39th Street.  Charles, Jr. listed his occupation as clerk, and may well have been associated with his father's business.
The Spear house was the scene of what The New York Times deemed a "very brilliant wedding" on the night of December 15, 1880.  Ella Spear was married to Alexander Reed, Jr. that evening.  The newspaper said the ceremony "attracted a very large concourse of people, while the reception that succeeded was attended by about 200."
"The parlors were decorated, and the collation which followed was superintended by one of the most accomplished caterers," reported The New York Times.  Costly wedding gifts had arrived at the house for days prior to the event.  The article noted, "The presents were arranged in an apartment on the second floor, to which only the favored few possessed the open sesame."
Because Charles Spear's business was on the Hudson riverfront, he understandably pushed for the passage of the West-Street Improvement Bill in 1880.  It would provide compensation for any businesses "whose rights should be encroached upon by the Dock Commissioners."  When a bloc of lobbyists protested the bill, he joined with five other well-known citizens, including Ambrose C. Kingsland and Ward McAllister, in a letter to the editor of The New York Times calling those opposed to the bill "ignorant" and "selfish."
The Spears sold the house to E. G. Selchow in 1884.  A year earlier Selchow had suffered an illness and visited the recently-opened Berachah Home (the House of Blessing) at No. 331 West 34th Street.  Here the faithful came to receive divine healings.  The Christian Alliance reported it "was the scene of many blessed manifestations of the Divine Presence and power during the ensuing year."
In his 1920 biography The Life of A. B. Simpson, A. E. Thompson noted, "One year after the Home was begun, Mr. E. G. Selchow, who himself had been marvelously healed, donated a building at 328 West Twenty-third Street."  The dedication took place on May 5, 1884.
The Christian Alliance reported that "many hundreds of guests left its doors refreshed, quickened and, in many cases, signally restored to health and strength."  The Berachah Home was operated by Ellen A. Griffin and Sarah A. Lindenberger.  Griffin had been an active worker in the city missions and she, too, had been "wonderfully healed," according to A. E. Thompson.  Sarah Lindenberger had come from a "wealthy and worldly Southern family," but had now devoted her life to the work of the Berachah Home.
The organization left in the autumn of 1886 when it moved into two adjoining houses on the corner of 61st Street and Park Avenue.  E. G. Selchow sold No. 328 in September that year to F. Ehrman for $30,000--around $841,000 today.
The former mansion now became an upscale boardinghouse, home to professionals like attorney William Ransom Barbour, and architect Henry Colden.  An advertisement in The Evening World on June 21, 1893 described "Large, cool and smaller rooms; excellent board, permanent and transients; location central."
The turn of the century saw boarders of a decidedly artistic bent in the house.  On May 2, 1900 The Musical Courier reported "A well attended musicale was given by Miss Mae D. Mackay under the patronage of Mrs. F. D. Chase and Mrs. J. W. Sargent recently, at 328 West Twenty-third street...Miss Mackay is a stranger to New York musical circles, but her musicale was a success."
In 1903 artist Cara A. Coman boarded here, as did Madame Von Schierbrand who advertised "voice placing, first class" that year.
But major changes for the once elegant private home were on the horizon.  In 1906 the Leo House for German Catholic Emigrants purchased it along with Nos. 330 and 332.  Although the houses were not joined internally, they were operated as a single entity to house immigrants.
The organization also ran Leo House on State Street, opened in 1890 as a home for German Catholic immigrant girls.  In July 1920 the New-York Tribune reported that the organization had sold those four buildings, noting "The sellers will continue the emigrant house and home for working girls in charge of the Sisters of St. Agnes, at 328 and 332 West Twenty-third Street, and will extensively alter the premises occupied."
The renovations were completed in January 1921.  The New York Herald reported on January 30 "The new Leo House for German immigrants, which the St. Raphael Society has completed at 330 West Twenty-third street, will be dedicated this afternoon."   No. 328 was now a convent, the article explaining:

The Sisters of St. Agnes are in charge, and the religious requirements of seclusion for them, one of the conditions which did not exist to the fullest extent in the old Leo House because of the lack of room, has been looked after by setting apart for their use the building that was 328 West Twenty-third street.  The girls who help the sisters also will live there.

In 1928 the city announced plans to widen West 23rd Street and demanded that the stoops be removed.  The entrance of No. 328 was lowered to the former basement level and the doorway became a window.   A branch of the Century Bank moved into the ground floor. 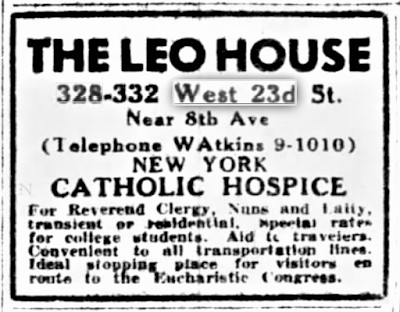 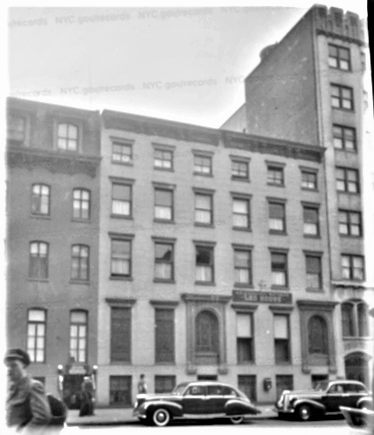 In 1941 stained glass filled the former doorway at No. 328 and the original surround survived.  A sign for Leo House hands on the facade of No. 330.  via the NYC Dept of Records & Information Services
By the first decade of the 21st century the Victorian detailing of the facade had been shaved flat in an attempt at modernizing. 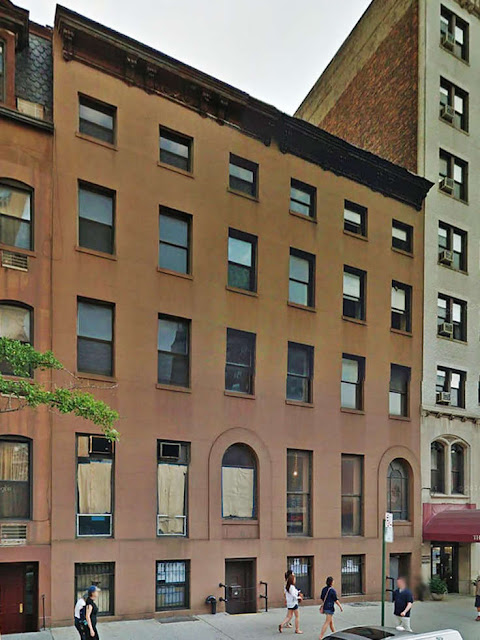 photo via cityrealty.com
When the house was offered for sale in 2010 Curbed New York described it as a "vacant five-story walk up building in need of a gut renovation."  It was purchased for $3.96 million and given a massive renovation that returned it to a single-family residence.  The facade was veneered in white stone and given lintels and sills appropriate to the home's history.  Somewhat regrettably the stoop was not refabricated. 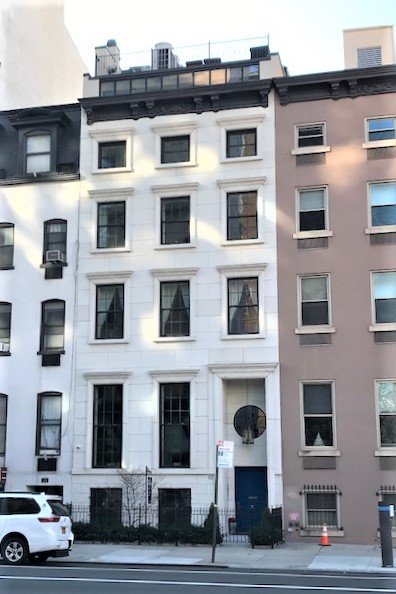 photographs by the author
Posted by Tom Miller at 1:23 AM