The daughter of John Jacob Astor and the former Sarah Todd, Dorothea Astor was born in 1795.   Following her wedding  to Colonel Walter Langdon, in 1812 her father presented the couple with a lavish summer home in Hyde Park, New York.


The Langdons were abroad in 1845 when Astor began work on another sumptuous gift--a townhouse.   Years earlier he had accumulated a large amount of land in the district where the Cooper Union stands today.  His own mansion sat on the block-long Art Street between Broadway and Lafayette Place and now he started construction on a mansion for his daughter and son-in-law on the Lafayette corner of the same street.

The property was approximately 250 feet wide on Art Street and filled the Lafayette Place block to East 8th Street.  When the Langdons returned to New York the exterior of the mansion was complete.  The free-standing, Greek Revival house was faced in red brick and trimmed in brownstone.  A columned portico sat above an elegant split staircase on the Art Street side, and a gently curved bay at the side prevented a box-like appearance.

According to the 1907 Old Buildings of New York City, Astor "built merely the shell of the house, and on his daughter's return gave her the sum of thirty thousand dollars for the purpose of decorating it.  Carte blanche was given to a famous decorator of that day, and he proceeded to finish it in a style hitherto unknown in the city."

Indeed, Dorothea did not hold back.  "A great deal of attention was paid to the plaster and stucco ornamentation and woodwork," said the article.  A grand staircase "of a dark rich colored wood" was constructed in England and shipped to New York.   Old Buildings of New York City called it "beautifully carved and of a very graceful design."  It was illuminated by a stained glass skylight.  Dorothea overstepped her budget and in the end the project cost her father $60,000--over $2 million in today's money.

As guests entered, they were shown into the reception rooms to the left.  The main hall continued to the conservatory at the rear of the house.  To the right were the library, dining room and offices.    Behind the property were the Langdon stables.  Both Dorothea and Walter were accomplished in the saddle and the enclosed garden "contained a ring large enough for riding purposes," according to Old Houses of New York City.

Walter Langdon died in 1847, followed closely by John Jacob Astor on March 29, 1848.  The wealthiest man in America, Astor's will was generous to Dorothea.  She received all the silverware from his home, stocks worth millions in today's terms, and 100 lots of Manhattan property below 14th Street.  Astor had held onto the title of the Langdon mansion, which was now passed to Dorothea "to have and to hold...during her natural life, free from and exclusive of any interest or interference of her husband."

Before the end of the year Art Street was renamed Astor Place, prompting a change in the name of the opera house diagonally across Lafayette Place to the Astor Place Opera House.  It was the scene of a horrific rampage known forever after as the Astor Place Riots on May 10, 1849. 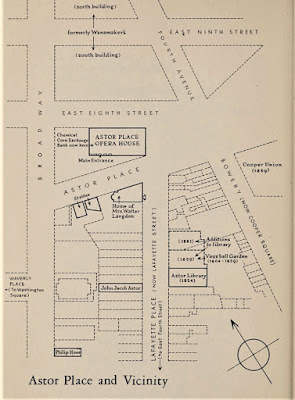 The location of the Landon mansion is clearly shown on this map from The Astor Place Riot, 1958


The dichotomy between classes, as well as the rivalry between England and America, boiled over that night.  Edwin Forrest was the reigning American tragedian; the position held in England by Irish-born William Macready.  A fierce rivalry already existed between the two actors and local loyalties to Forrest were intense.  When the Astor Opera House booked Mccready to play Macbeth, thousands crowded into the streets of the fashionable neighborhood to voice their dissatisfaction.


A pamphlet with the unwieldy title “Account of the Terrific and Fatal Riot at the New-York Astor Place Opera House on the Night of May 10th 1849, with the Quarrels of Forrest and Macready, including all the Causes which led to that Awful Tragedy!” laid out the details of that night:


Around this edifice, we say, a vast crowd was gathered.  On the stage the English actor Macready was trying to play the part of Macbeth, in which he was interrupted by hisses and hootings, and encouraged by the cheers of a large audience, who had crowded the house to sustain him.  On the outside a mob was gathering, trying to force an entrance into the house, and throwing volleys of stones at the barricaded windows.  In the house the police were arresting those who made the disturbance—outside they were driven back by volleys of paving stones.
The mansions of the neighborhood were targets as well, as bricks and rocks crashed through their windows.  During the inquest that followed Stephen W. Gaines reported on guns being shot off, "some of them were fired perpendicular, some on an inclined plan towards the house of Mrs. Langdon."  A neighbor, Wall Street broker George W. Gedney was trying to get home.  The newlywed "was shot instantly dead, as he was standing inside the railing by the Langdon mansion.  At the first volley, a ball pierced his brain," according to another witness, Thomas J. Belvin.
One of the Langdon servants went to the roof to watch, assuming he was safe far above the melee.  He was struck by a bullet and killed.  In the meantime, the turmoil spilled into the the mansion itself.  Sylvester L. Wiley testified about trying to bring a wounded man into the house:
We tried to get into Mrs Langdon's house, as we did not know how much he was hurt. We knocked at the door, which was opened by a gentleman, who repulsed us as soon as he saw what we wanted; he closed the door as far as he could but the crowd pressed so he could not quite get it closed, he sang out for assistance, when three or four men came from the back door, one of whom - a policeman, I knew him by his star - struck me over the head and knocked my hat off, so that it fell in the hall. I called on the crowd to give way...
The following morning former Mayor Philip Hone visited the sight.  His diary entry said "Mrs. Langdon's house looks as if it had withstood a siege."
Dorothea soon spent nearly all her time abroad.  Her daughter, Eliza, had married Matthew Wilks at the Hyde Park estate in 1842 and the couple now moved into the Astor Place mansion.
By the time of Dorothea's death in Nice, France on February 15, 1874 the neighborhood around Astor Place was becoming increasingly commercial.  The Wilks family established an estate, Cruickston Park, in Galt, Canada and in 1875 the Langdon mansion was demolished.
On March 25, 1894 The Sun reminisced, "There are but a few now living who remember the smart balls at Mrs. Langdon's house in Lafayette place, a locality which the present generation find it difficult to believe was once a centre of fashion."  And in reporting on Eliza's death in 1896, the New York Herald remarked "Years ago the Wilks mansion stood on the corner of Astor and Lafayette place, and was the scene of much gayety and many social entertainments."