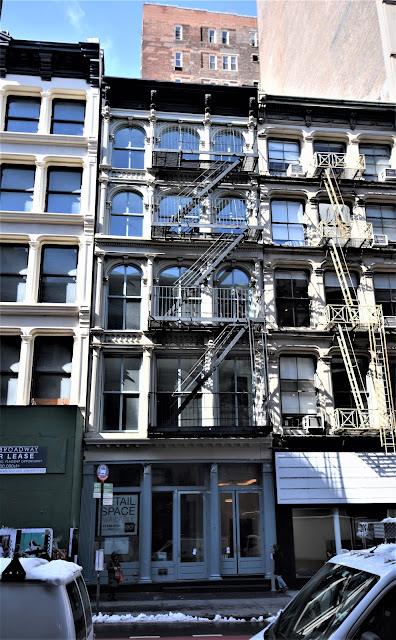 On June 9, 1860  the New-York Daily Tribune published an article entitled "City Improvements" and commented on the "number of elegantly-finished marble-front stores" being erected in the dry-goods district.  "With the panic of 1857 came a cessation in improvements generally throughout the city, but during the last two years the march has again resumed."  The article described a long list of buildings being erected, adding "Preparations are in progress to erect upon lot No. 391 Broadway a first-class marble-front store, which will cost about $40,000."

That building would sit on a 25-foot plot owned by Lorillard Spencer between White and Walker Streets.   The vintage structure on the site, along with the little building in the rear, had been the home and shoe store of Benjamin Lockwood in the 1830's.  His son, Benjamin, Jr. carried on the business here well until about 1847.

Now Spencer agreed to allow his uncle, John D. Wolfe, to replace the old buildings with a modern loft structure.  Wolfe had amassed his large personal fortune through the hardware and real estate business.  He commissioned the prominent architect John B. Snook to design the building.

If, like the Tribune reported, Wolfe had intended to face his building in marble, those plans soon changed.   Two years earlier Snook had sought out the services of Daniel Badger's Architectural Iron Works for the facade of his striking No. 620 Broadway.   He now used the same technology for No. 391.

This cast iron facade, too, most assuredly came from the Badger's foundry.  Striking similarities are found in one example in the the firm's 1865 catalog.   Above the storefront, supported by fluted, Corinthian pilasters and columns, the Italianate-style building featured engaged Corinthian columns, arched openings and spandrel panels below the third and fifth floors which pretended to be balustraded balconies.

The building was completed in 1862--a time of great national upheaval.  Not only had the Civil War broken out a year earlier, but the now-diluted army presence in the Far West was dealing with Native American uprisings.

One of Wolfe's first tenants did his part.  On November 7, 1862 the New-York Daily Tribune announced "Relief For The Minnesota Sufferers--Contributions are needed for the relief of the sufferers by Indian depredations in Minnesota, and will be received by Frederick C. Jones, No. 391 Broadway."

By 1868 Thomson, Langdon & Co. had moved its formidable operation into the building.   Manufacturers and wholesale dealers in corsets, it marketed its "Glove-Fitting" model as being unexcelled in "elegance, comfort, durability."


By 1872 the firm had branched out, manufacturing other items and acting as commission merchants for foreign makers.  An advertisement that year touted the "Glove-Fitting" corset (which "has been greatly improved"), the new Thomson's Crown Gloves and the Thomson "unbreakable busk" (or corset stay).  It also announced "We are Agents for the celebrated Gerson of Berlin."  The ad said that shipments from Germany arrived every week with "fashionable garments for ladies' wear--suits, embroidered jackets, paletotes, sacks, opera cloaks, &c."

That year the ground floor store was the scene of an exciting, if brief, exhibition and sale.  The 1850's had seen inventors and engineers battling over improvements to the sewing machine.  In 1857 James Edward Allen Gibbs, a farmer in Virginia, patented the first chain stitch single-thread sewing machine.  He partnered with James Willcox Gibbs to form Willcox & Gibbs Sewing Machine Company.  Now they brought their innovations to Broadway.

On April 16, 1872 the New-York Daily Tribune announced  "There is an Exhibition, now on view at 391 Broadway, which possesses many points of interest.  It is that of over a thousand Sewing-Machines, of almost every leading name known to the public.  These Machines are exhibited by The Willcox & Gibbs S. M. Company...and they will be sold at Auction To-Morrow."

The following day the newspaper followed up with a full-column article entitled in part "Willcox & Gibbs Triumphant."  In reporting on the successful sale, the journalist commented on the invention itself.  "The condition of millions of working people has been vastly improved both in a material and moral sense  A branch of foreign trade of no mean dimensions has sprung up; while in almost every family of the land the influence of this invention is felt in the diminution of female drudgery."

In the meantime Tompson, Langdon & Co. continued to diversify.  One of two separate ads in The New York Herald on May 28, 1873 offered more than 50 "choice and delicate odors" imported from the Crown Perfumery Company of London.  The scents were available in $1, $2 or $3 bottles--the most expensive costing about $40 in today's money, a pricey amount at wholesale.

The other advertisement announced that Thomson Langdon & Co. was now selling pairs of "the Celebrated Crown Hair Brushes."  Made of "real Russian bristles," they were guaranteed to be "penetrating; they make hair brushing a pleasure, and, with proper use, will last a lifetime."


Among Tomson, Langdon & Co.'s employees was a young bachelor, F. D. Markwell.  The salesmen was sent abroad by the firm early in 1873.  Having completed his business, Markwell boarded the R.M.S. Atlantic at Liverpool to head home on March 20 .   A gale buffeted the ship on the night of March 31 and at around 3:15 the following morning, near Halifax, the Atlantic struck a rock just below the surface.  To the terror of its passengers and crew the ship began listing, and then sinking.

The ten lifeboats were lowered, but the heavy seas either swept them away or smashed them.  One of the crew managed to somehow get a life-line stretched to shore; the only hope for passengers (some of whom had to escape the sinking ship through portholes).   The terrifying notion of using the life-line was possibly the reason that all but one of the women and children--156 in all--remained aboard.  All of them perished except 12-year old John Hindley.  Of the 952 on board, only 371 survived.

On April 3 the New-York Tribune's full-page coverage of the disaster--the worst loss of civilian life in the North Atlantic to date--noted "Mr. F. D. Markwell, a salesman of the firm of Thompson [sic], Langdon & Co., No. 391 Broadway, a young single man, who has been abroad on business for the firm" was "among the saved."

Markwell sent two telegrams to New York on the same day as the Tribune's report.  Both reflected the horror of the incident:

To Thomson, Langdon & Co., No. 391 Broadway: I am safe and well, but remain with the wreck to save the bodies of friends lost.  Send me a draft on some Halifax bankers, for money, by telegraph.  I have lost everything.

The other went to the New York office of the Associated Press:

Say to the friends of the cabin passengers of the steamer Atlantic that I will remain with the wreck until I have secured all the lost cabin passengers.  I have boxes going to the wreck this morning to receive the bodies.  The bodies of Mrs. Fisher and Miss Merritt we have.  The bodies of Mr. and Mrs. Merrit, Miss Scrymser, and John H. Price of New-York, I have great hope of securing.

By 1884 Thomson, Langdon & Co. had moved to Worth Street.  Cloakmakers Meyers & Stix were operating from the building the following year when the industry was hit with a general strike.  On August 17, 1885 The Evening Telegraph reported "Over 300 dress and cloakmakers employed in the several manufactories of this city are on strike."  The same amount was anticipated to walk out the following day.  Among those affected was Meyers & Stix.  According to the article eleven men participated in the strike.

In December 1898 agent W. E. Hoyt (who would remain here for years) advertised:

The Hot Springs of Arkansas
The National health and pleasure resort; owned and controlled by U. S. Government.  Elegant hotels, Arlington, Eastman and Park.  Golf and other amusements. For information and booklets apply to W. E. Hoyt, 391 Broadway.

In June 1899 the Spencer estate contracted the architectural firm of Jordan & Giller to make "alterations to stores and lofts" at a cost of $8,000.  The upgrades to the aging structure would be equivalent of about a quarter of a million dollars today.

Less than five years later, in March 1905, more renovations were done.  This time a dumbwaiter was installed along with a new storefront, designed by Westervelt & Austin.  The improvements were in anticipation of W. Thompson's restaurant on the ground floor.  He had signed a lease a few months earlier.

On April 2, 1910 the Record & Guide ran a large announcement of the coming sale of the Lorillard Spencer Estate.  No. 391 Broadway was described as being "located in the Hardware Section."  The highest bidder for the property was William H. White, who spent $110,000 (in the neighborhood of just under $3 million today).

While the auction announcement deemed the neighborhood the hardware district, No. 391 continued to attract drygoods and apparel firms.  In November of 1913 the Rival Hat Company took the top floor and in May 1916 Wizard Shirt Company moved in.

Linen merchants P. Rosner & Brother were in the building by 1919.  The firm was the target of thieves twice in a matter of weeks in 1920.  On the night of February 12, 1920 burglars entered and made off with goods valued at $5.000.   Then, on March 7, another loss was detected.  This time the crooks were sneakier.

The New-York Tribune reported "The owners of the store declared that when employees entered on the morning following the visit of the burglars there was no outward sign that goods had been taken."  When the valuable stock was removed, the crooks arranged boxes and bolts of fabric to hide the fact that anything was missing.  It would be a couple days before the theft was noticed.

The Broadway block was changing by now.  Around 1922 the first one-man attorney office moved in, and by the end of the decade at least four others were here.  Nevertheless, the venerable building continued to house textile firms as late as the 1990's.

But then, on August 27, 2013, The New York Times ran the headline "Sudden Burst of Residential Activity in an Overlooked Slice of TriBeCa."  Journalist Julie Satow's article began "The area of lower Broadway south of Canal Street in Manhattan has long been characterized by nondescript discount stores and lunchtime counters packed with city workers.  It has been mostly ignored by the wave of gentrification to the west that has flooded TriBeCa over the last decade."


Like the 1860 article in the New-York Tribune, this one listed the many new structures and renovated buildings.  And once again No. 391 was on the list.  "The Keystone Group acquired 391 Broadway, a commercial building, eight months ago and is converting it into four residential floor-through lofts." 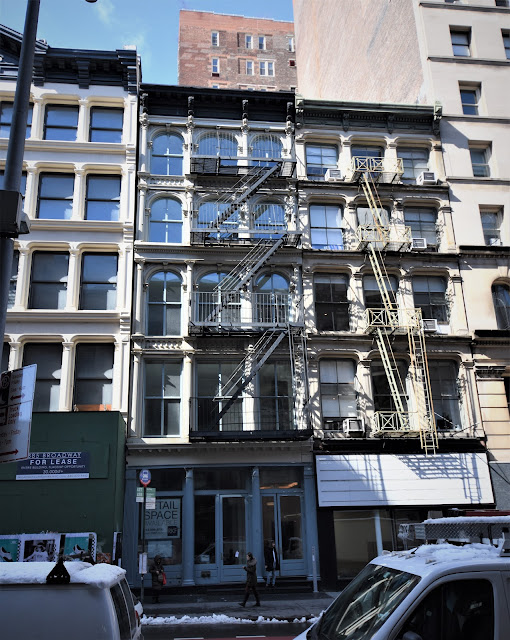 Easily overlooked behind the zig-zagging fire escape, the nearly 120-year old building has suffered.  Most of the Corinthian capitals have fallen off their cast iron columns.  Nevertheless, the dignity of John B. Snook's Italianate business palazzo survives.