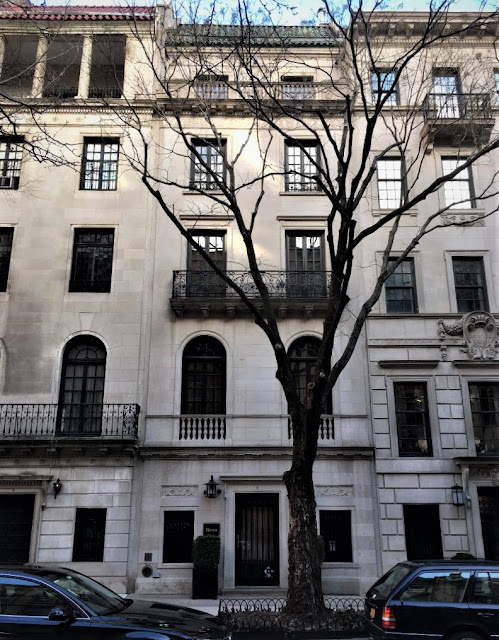 
Coburn's homes were purchased by well-to-do families.  No. 11 was home to William B. Baldwin and his wife, Mary, in the 1880's.  Baldwin was treasurer and director of the Croker-Wheeler Electric Motor Co.  The couple sold the house to William E. Pruden on March 5, 1891, teeing off a rapid-fire series of selling and re-selling.

On November 12, 1899 the New York Journal and Advertiser reported that "Professor Graham Lusk, of the University of the City of New York, has bought the four-story brownstone front residence...for $55.000."  The price would translate to about $1.72 million today.


Graham Lusk was born in Bridgeport, Connecticut on February 15, 1866.  He graduated from Columbia University and then earned his doctorate at the University of Munich in 1891.  The following year began assisting in lectures at the Yale Medical School and four years later he became the institution's Professor of Physiology--an astonishing feat considering he was deaf.

A recognized expert on diabetes and nutrition, he published books on the subject, like his 1906 The Elements of the Science of Nutrition, and lectured widely.

The 74th Street house was the meeting place of The Harvey Society.  The 2008 book The Harvey Lectures explained "The Harvey Society was founded April 1, 1905 by 13 New York scientists and physicians, who met at 9 East 74th Street, the home of physiologist Graham Lusk."  The printed lectures given at the meetings were published annually as a collection.

The Lusks' country estate was White Heather Farm at Bethany, Connecticut.  But the family routinely were guests at other millionaires' retreats.   On August 24, 1902 the New-York Tribune reported "Graham Lusk and his friend, A. B. Taylor, of New-York, are visiting at the Stokes camp for a few days.  Anson Phelps Stokes and the Misses Stokes find much pleasure in their fine electric launch."  And on July 15, 1906 the newspaper announced "Mr. and Mrs. Graham Lusk and Dr. and Mrs. Thomas R. French are at Paul Smith's in the Adirondacks."

By 1917 the brownstone houses off Central Park were decidedly out of fashion.  Modern palaces for Manhattan's wealthiest citizens appeared as the old home were either razed or drastically remodeled.  On April 21 the Real Estate Record & Builders' Guide reported that a single buyer had bought No. 9 East 74th Street from Mrs. H. Metzger and No. 11 from Dr. Graham Lusk.  The article said that the "purchaser may improve with a single residence on the combined frontage."

That seems to be the objective of Emily and Edgar Hesslein, then living at No. 21 East 46th Street.  Title to the properties was filed in Emily's name and the New-York Tribune commented she intended "to build one large house for her own occupancy."  But that never came to pass.

Instead in 1919 the Hessleins hired the architect George and Edward Blum to remodel the individual houses.  The brothers had arrived in New York from France in 1888 when George was just 9 and Edward 12-years old.  They studied at the Ecole des Beaux-Arts in Paris before returning to open their firm Blum & Blum in 1909.  It appears that George was responsible for handling the Hesslein project.

Plans were filed together in June 1919, estimating the total cost at $200,000--or just under $1.5 million each today.   The massive renovations resulted in harmonious, but distinctly different neo-Italian Renaissance palazzi.

Like its fraternal twin, No. 11 was faced in limestone.  At the second floor high French windows within arched openings were fronted by elegant stone balustrades.  French doors at the floor above opened onto a wide stone balcony with ornate iron railings.  The fifth floor sat back, providing a balcony behind a stone balustrade.  The sloping roof was clad in green Spanish tiles.

On May 7, 1921 The New York Herald advised that "Mr. and Mrs. John Wanamaker, Jr., who have stopped at the Ritz-Calrton Hotel when in New York, have purchased the house at 11 East Seventy-fourth street for their New York home."

Born on August 1, 1890, Wanamaker was the son of Rodman Wanamaker and the grandson of Philadelphia department store mogul John Wanamaker.   His wife was the former Pauline Disston.  Their wedding on August 11, 1917 in Newport was a significant social event, the reception held afterward in the Disston cottage on Ochre Point.

A year after the couple moved in the family grew.  Wealthy socialites quite often preferred childbirth in the comfort and privacy of their homes to clinics or hospitals; and such was the case with Pauline.  On July 9, 1922 the New York Herald reported "Mr. and Mrs. John Wanamaker, Jr., are receiving congratulations on the birth of a daughter born last Sunday at their residence."  The infant was named Fernanda. 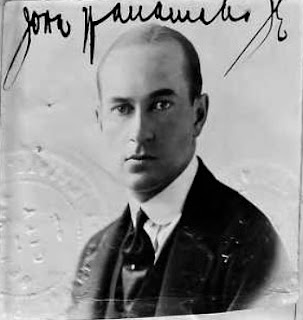 The Wanamakers had moved on by 1928 (their marriage would end in divorce in 1932), when No. 11 was home to Withrop W. Aldrich and his wife, the former Harriet Alexander.  Two years later Aldrich would become president and chairman of the board of Chase National Bank.  The couple's 40-room country home was in Brookville on the north shore of Long Island.

By the early 1930's Robert Winthrop Kean and his wife, the former Elizabeth Stuyvesant Howard, briefly lived at No. 11.  Kean's father, Hamilton Fish Kean, was a United States Senator from New Jersey.  Robert would be elected to the House of Representatives in 1938.  The couple's son, Thomas, was born in the house on Easter Sunday, April 21, 1935.  He, too, would go into politics, serving as New Jersey Governor from 1982 to 1990.

Following the Keans residency, No. 11 was purchased by Reginald B. Lanier and his wife, the former Helen Cameron.  The couple had been married in the Cathedral of St. John the Divine in December 1921.

Change would come to No. 11 after Lanier leased it to Alan D. Merritt in September 1945.  The New York Sun noted he "will occupy it after alterations are made."   Renovations resulted in a "doctor's laboratory, storage and X-ray rooms" in the basement, "administration headquarters" on the first floor, and a single-family home in the upper levels.  The house was now headquarters for the Madison Foundation for Biochemical Research.  The certificate of occupancy noted "Doctor to reside on premises."

The mansion was the scene of serious research into the causes and treatment of disease.  In February 1949, for instance, director Rudolph Keller published "A Study of Electric Phenomena in Living Tissues by Means of Luminescent and Non-Luminescent Dyes."

A subsequent renovation completed in January 1955 maintained the laboratories in the basement, but installed a doctor's office on the first floor, two apartment per floor above, and a new penthouse apartment.

The upscale apartments were home for decades to well-to-do tenants, like Ann Lipman.  The head of her own public relations firm, she lived here in the late 1960's until her death in July 1972. 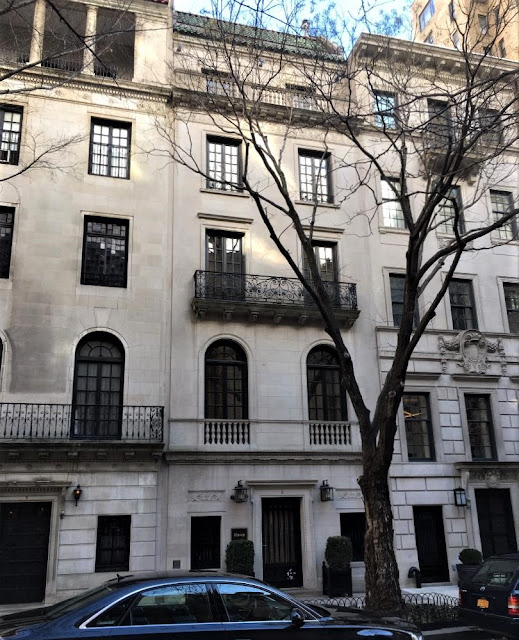 The former Wanamaker mansion was put on the market in 2006.  It did not sell and in 2008 a renovation brought it back to a single-family, seven-bedroom home.  The property sold the following year for about $21 million.