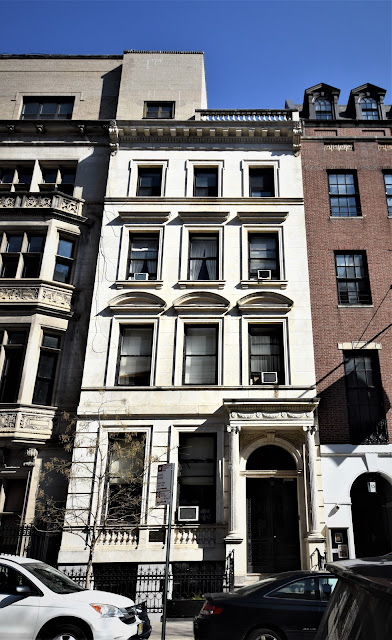 Henry H. Cook made his fortune in railroads and banking.  When he began planning his enormous mansion in 1880 at the north corner of Fifth Avenue and 78th Street he took additional steps to ensure the exclusivity his neighborhood.  Cook purchased the entire block from Fifth Avenue to Madison Avenue, between 78th and 79th Streets for $500,000 (just over $12.5 million today).  He then attached stringent restrictive covenants to the plots: no structure other than a private home designed in a "splendid style" could be built on what became known as the Cook Block.

It would be several years before the general northern migration of moneyed New Yorkers caught up with Cook; but one-by-one he sold off the properties and on June 2, 1899 he sold the vacant lot at No. 11 East 78th Street to Byam Kerby Stevens and his wife, the former Elizabeth Langdon Wilks.   The high-end tenor of the Cook Block was reflected in the price--about $1.75 million in today's money.

As was commonplace, title to the property was put in Elizabeth's name.  By the end of summer the couple had hired the respected architectural firm of Clinton & Russell to design a residence on the 25-foot wide plot.

Completed in 1900, the four story structure was faced in limestone.  The days of Beaux Arts confections were quickly passing and Clinton & Russell focused instead on stately refinement, creating a subdued Italian Renaissance townhouse.

The rusticated parlor level sat above a low stone stoop.  The arched entrance, which featured carved spandrel panels and an exquisite iron grill within the fanlight, sat within a high portico supported by fluted columns with Scamozzi capitals.  Blind balustrades below the parlor windows gave the visual impression of added height.

The sparse decoration of the planar-faced upper floors relied entirely on window treatment.  The openings of the second floor wore Renaissance arched pediments, the third floor molded cornices, and the fourth eared surrounds.  A stone balustrade ran along the top of the bracketed cornice.

Both Byam and Eliza had impressive pedigrees.  He was the grandson of Major General Ebenezer Stevens, who had been in charge of the defenses of New York City during the War of 1812.  His maternal grandfather was Albert Gallatin, Secretary of the Treasury and Ambassador to the Court of St. James and to France.  Byam Kerby Stevens, Sr., his father, was a prominent banker.

Eliza was the daughter of Matthew and Eliza Langdon Wilks and a great-granddaughter of John Jacob Astor.  She had been educated in Europe.

Like his father, Stevens made his fortune in finance.  He had been a member of the Gold Board of New York, the precursor of the Stock Exchange, and held a seat on the Exchange from its inception until his retirement in 1883 when he devoted his time to real estate.

As with all wealthy figures in society, the newspapers followed the Stevens' movements.  Although they maintained a summer estate, Sunnyhome, in Lenox, Massachusetts, they frequently traveled to fashionable resorts and abroad.

On August 7, 1908, for instance, The Evening Telegram advised "Mr. and Mrs. Byam K. Stevens, of No. 11 East Seventy-eighth street are at present in Cheltenham, a watering place in Goucestershire, England, where they intend to remain for several weeks."

A decade after moving in the Stevens updated the house.  The plans filed by their architect, Paul Schleich, called for a new skylight and windows, and "partitions," suggesting that the floor plan was slightly adjusted here and there.

Byam and Eliza were active in both social clubs and philanthropic work.  Byam held memberships in the Metropolitan, Union, and Knickerbocker Clubs, as well as the Sons of the Revolution.  He was particularly interested in charitable hospitals and was an administrator of the Episcopal Orphan Asylum.  Eliza was a member of the Colony and York Clubs in Manhattan and the Lenox Club.

In November 1911 Byam K. Stevens became ill and two weeks later, on December 12, he died in the house at the age of 75.  His funeral was held in Grace Church two days later.  The New-York Tribune later reported that "his wife was the largest beneficiary" of his estate, valued at the equivalent of $24 million today.

Eliza stayed on in the house and she continued her husband's work within his favorite charity.  She served as First Directress of the Orphan's Home and Asylum of the Protestant Episcopal Church in New York.  The orphanage accepted orphans and “half-orphans” from 3- to 8-years-old (unless they had “incurable diseases” or were “physically imperfect”).

Each year society columns reported on Eliza's closing of the townhouse and opening Sunnyhome; then closing that residence and opening No. 11.  But a world war changed the routine for one season.

On January 27, 1918 The New York Times reported that Eliza had leased "an apartment comprising an entire floor at 927 Fifth Avenue."  She paid $11,500 for the one-year lease.  By living elsewhere she was able to offer her 78th Street house "for the use of the Red Cross."

Back at home following the war, Eliza continued her philanthropic works.  On January 30, 1925, for instance, The New York Telegram and Evening Mail reported on Bishop William T. Manning's continuing efforts to raise money for the erection of the Cathedral of St. John the Divine.  The article noted "The Bishop's mail yielded a check for $5,000 from Elisha S. W. [sic] Stevens, No. 11 East Seventy-eighth street."

Despite her advancing age, Eliza continued her routine.  Then, without warning, she died at Sunnyhome on May 31, 1930.  The New York Times noted "She had been motoring yesterday."

The following year, in April, a succinct advertisement appeared in The New York Sun:  "For Sale--11 East 78th Street--To Settle an Estate."  It became home to Eugene L. Wilker.  Following his death it was sold in May 1941 to Edward K. Bachman, who was living at No. 52 Gramercy Park at the time.  But the end of the line for No. 11 as private home was on the not too distant horizon.

On July 11, 1947, The New York Times reported that No. 11 East 78th Street had been sold “for altering into small apartments.”   The renovation, completed the following year, resulted in three apartments on each floor.  While the facade was preserved, the owners committed architectural sacrilege by removing half of the rooftop balustrade and installing a penthouse apartment, the design of which was as pleasing as a World War II bunker. 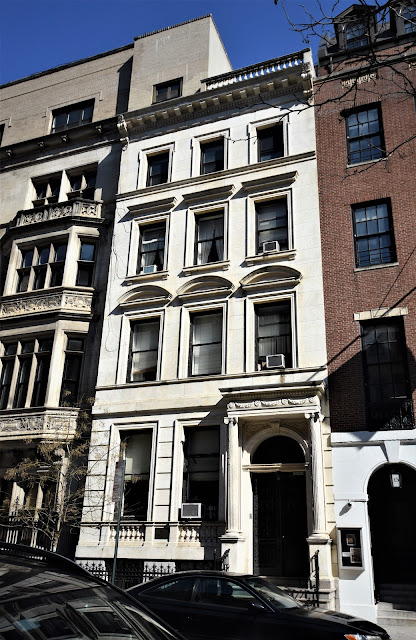 Scandal visited the house in August 1952.  The living arrangements of 23-year old tenants Pat Thompson (described by The New York Times as “a tall blonde”), and 39-year old Richard Short got them arrested.

Short was a motion picture actor, working mostly as an extra under the professional name Richard Wallace.  But he had another, less respectable, source of income.

Assistant District Attorney Burton B. Roberts charged that Short lived with the young woman “on a commercial basis and an arrangement of convenience, where, in exchange for love and affection from him, she gave him at least $300 weekly.”   The money he received for the companionship and sex he provided was most likely more than he got from his acting--it would equal more than $2,800 a week today.

Richard Short was held on $25,000 bail on charges of prostitution and Pat Thompson was jailed, unable to pay her bail.

A much less controversial resident at the time was Margaret Lowengrund Lilly, an artist and lithographer known professionally as Margaret Lowengrund.  Her works were widely exhibited.  During the 1920's she had taken a position as artist with the London Daily Express and, upon returning to the United States, illustrated the popular "Sketches About Town" column in the New York Evening Post.  She died in her apartment here at the age of 55 in 1957.

The house became home to playwright David Rimmer and his wife, Ellen, in 1980.  That year he wrote the Pulitzer Prize nominated play Album, which ran for a year in the Cherry Lane Theater.  The New York City and Chicago productions of Album introduced audiences to new actors like Kevin Bacon, Sam Robards, Alan Ruck, Jennifer Gray, and Megan Mullally.
While living here Rimmer wrote Yankee Wives, a comedy about six women married to professional baseball players.  It was performed at the Old Globe Theater Main Stage in San Diego.  His play New York dealt with the aftermath of 9/11.  David Rimmer was still living here in 2017 when he died at the age of 67.

Other than the woeful rooftop vandalism, the Stevens house survives little changed from the days when only "splendid style" residences could be erected on the block.