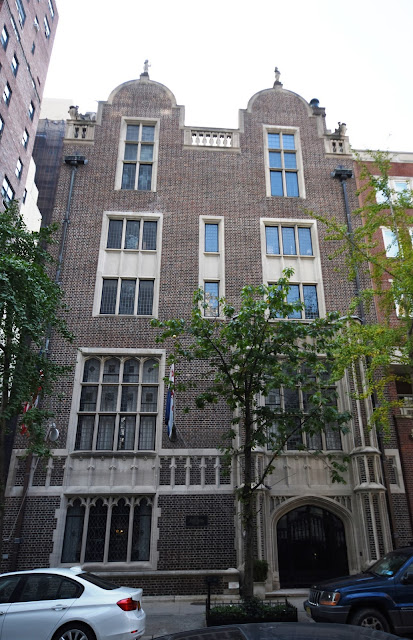 Although his grandfather, Edward C. Clark, had been passionately involved in the development of the Upper West Side (including the construction of The Dakota Flats); Stephen Carlton Clark chose the opposite side of Central Park as the site for his new mansion in 1910.

Born in Cooperstown, New York in 1882, Clark was married to the former Susan Vanderpoel Hun.  The couple had three sons, Alfred Corning, Robert Vanderpool. and Stephen Carlton. Jr., and a daughter, Elizabeth.  Immensely wealthy, Clark was a director in the Singer Sewing Machine Company, co-founded by his grandfather, and in other corporations.

The block of East 70th Street between Madison and Park Avenues was lined with high-stooped brownstones in the 19th century.  The Union Theological Seminary was also located on the block and in 1897 remodeled the abutting house at No. 46 into a "commodious modern residence" for the it's new President, Rev. Charles Cuthbert Hall.

Hall and his family lived comfortably in the handsome home until 1909, when the Seminary relocated.  On Christmas Day 1909 The New York Times announced that "the remaining portion of the Union Theological Seminary property, consisting of three dwellings...known as 42, 44 and 46 East Seventieth" had been sold.

The following year, on October 29, The Real Estate Record & Builders' Guide noted that "jewelry and diamond merchant," Louis Morris Starr had commissioned architects Tracy, Swartwout & Litchfield to design a mansion on the site, "to cost in the neighborhood of $125,000."

It was, instead, Stephen C. Clark who would erect a massive mansion here.  The Record & Guide noted on August 19, 1911 that plans had been filed by Frederick Junius Sterner.  The projected cost would translate to about $2.57 million in 2016.

The house was completed a year later.  Rising six stories, it was like no other residence in New York City.  Sterner earned a reputation by transforming outdated brownstones into modern, sometimes quirky, takes on romantic architectural styles--Tudor, Gothic and Mediterranean fantasies, for example.  There would be nothing whimsical, however, about the neo-Jacobean Clark mansion. 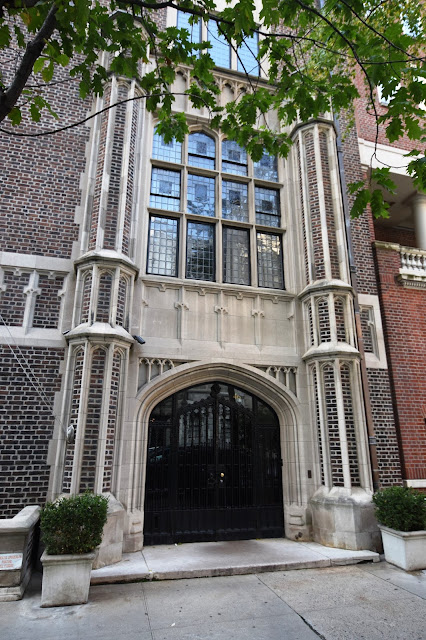 While Clark went about his busy schedule (he had been elected to the New York State Assembly in 1910).  Susan Clark was actively involved in charitable causes, most notably those connected with the Cathedral of St. John the Divine.

The Clark family maintained a summer estate in Stephen's hometown of Cooperstown.   He and his brother, Edward Severin Clark, built the Otesaga Resort Hotel there in 1909, the he was President of the Leather Stocking Corporation, based in Cooperstown, which directed the Clark enterprises.

Later Clark would found the Farmers Museum in Cooperstown, and in 1945 would donate the Fenimore House as the headquarters of the State Historical Association, of which he was Chairman of the Board.

The East 70th Street mansion would seem to have been designed for grand entertainments like balls and dinners.  But Susan's entertaining was, in seems, almost exclusively related to her charitable works.  For years the residence was the scene of the Cathedral Sewing Class and meetings of the Fresh Air Association of St. John the Divine.

The Fresh Air Association ran the House of Saint John the Divine, a facility encompassing about 30 acres on the Hudson River near Tomkins Cove.  Its purpose was "to promote the physical and spiritual welfare of the poor in the City of New York' to care for the sick, the young, the aged and disable; to minister to the needs of mothers and children during the hot summer months."

More than 500 mothers and their children would stay for about two weeks at a time each year.  The organization also ran "a well equipped boy's camp" on the property.

The Cathedral Sewing Class was related to the Fresh Air Association, and provided all the clothes worn by the children at the House during the summer.  Similarly, in February 1921 Susan Clark held the first meeting of the Clothing Committee of St. Luke's Hospital in the mansion.  During that meeting, according to the New-York Tribune on February 13, "Miss Rachael Jane Hamilton will sing songs on costume."

While Susan conducted her charity work, Stephen had offered his services to the country during World War I.  In 1922 he received a Distinguished Service Medal for his services as a lieutenant-colonel in the Adjutant General's Department. 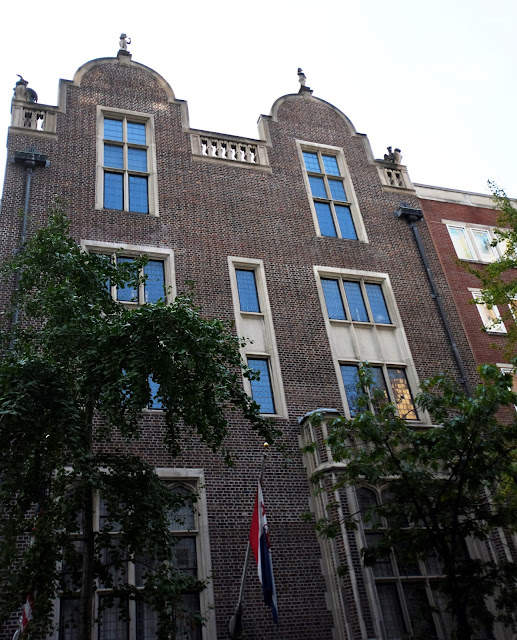 All the while the Clarks collected art.  The 70th Street house was filled with masterpieces by Rembrandt, Renoir, Cezanne, van Gogh, Degas, Hals, Picasso, El Greco, Seurat, Corot, and Braque. Deemed by The New York Times as "long known in the art world as a collector of discrimination," Stephen Clark assembled an important collection of works by Henri Matisse.

Millionaires' mansions were highly-private domains, rarely glimpsed by those outside of the highest social circles.  In a highly-unusual move, in 1926 the Clark home was opened to the public.  On December 5 The New York Times reported "Mrs. Stephen C. Clark...is giving the use of her house on Wednesday, from 10:30 A. M. to 6 in the afternoon, for a sale of articles made by blind men and women who are cared for by the Society for the Relief of the Destitute Blind."

And with the onslaught of the Great Depression, the mansion was opened again.  On November 16 and 17, 1932 the public was invited to view the Matisse collection for $2 admission.  The funds were to benefit Hope Farm, a community school for needy boys and girls in Dutchess County New York.

The Matisses hung in a room on the top floor of the mansion, "devoted entirely to that artist."  In various rooms on the lower floors, a sale of holiday gifts was conducted, including toys, home-made jellies and marmalade, infant clothing and similar articles.

The exhibition was so successful that it was repeated in April 1933 to assist the jobless.  Over the next few years the  Clarks' Matisse collection would be shown several times to benefit Depression Era charities, like the Unemployment Relief Fund.

It was about this time an old baseball came into Clark's possession.  He put it on display in the Cooperstown village library with other baseball paraphernalia in 1937.  The collection caught the attention of the President of the National League (later Baseball Commissioner) Ford Frick, who suggested a permanent hall to commemorate the game and hits heroes.  Stephen C. Clark donate the funds to erect the Baseball Hall of Fame, opened in 1939.

By now Clark was Chairman of the Board of the Museum of Modern Art and a Director of the Metropolitan Museum of Art, a trustee of St. Luke's and Roosevelt Hospitals, and a director of the New York Trust Company.

He had also founded the Clark Foundation in 1931 to direct his several interests like the Fenimore Art Museum and the Farmers' Museum.  The Foundation's work in New York City still offers grants to organizations "that help people out of poverty."

In the summer of 1952 Robert and his wife were visiting his parents at their Cooperstown estate.  Robert was suddenly afflicted with "a spinal ailment" and taken to a nearby hospital.  The 32-year old died on August 27.

On September 17, 1960 Stephen Carlton Clark died in the 70th Street house at the age of 78.  His important art collection was donated, in part, to his alma mater, Yale University, and to the National Gallery of Art in Washington DC.  But the majority was divided between the Metropolitan Museum of Art and the Museum of Modern Art.

In 1965 the Clark mansion was acquired by the Explorers' Club, founded in 1904.  Among the club's impressive roster of members over the decades were Robert E. Peary, Richard Evelyn Yeager, Neil Armstrong, Charles A. Lindberg, Lowell Thomas, Sir Edmund Hillary, Theodore Roosevelt, Sally Ride, and Eric Shipton.

The interiors were carefully preserved, and the walls were now appropriately hung with valuable paintings reflecting the club's legacy.   Albert Operti's Rescue at Camp Clay depicts the 1884 rescue of the scientific expedition of Adolphus W. Greely in 1884.  Commissioned by the United States Government to hang in the Capitol, it was acquired by the Club in 1946.  It is only one of dozens of Operti's works displayed in the clubhouse, including his memorial portrait of Robert E. Peary.

Also represented in the collection are Arctic paintings by artists like Frank Wilbert Stokes and Tappan Adney.  The mansion houses other artifacts, as well--Thor Heyerdahl's globe from the Kon-Tiki; polar bear mittens worn by Matthew Henson on the first successful expedition to the North Pole; and a replica of a Yeti scalp. 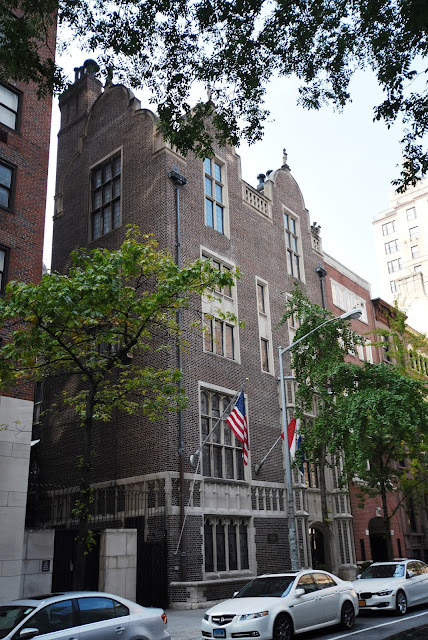 Few casual passersby would guess that the remarkable building at Nos. 42-46 East 70th Street was once a private home.  Through its careful treatment of the mansion, the Explorers' Club has preserved the Clark mansion as a fascinating survivor of the glittering Edwardian era.