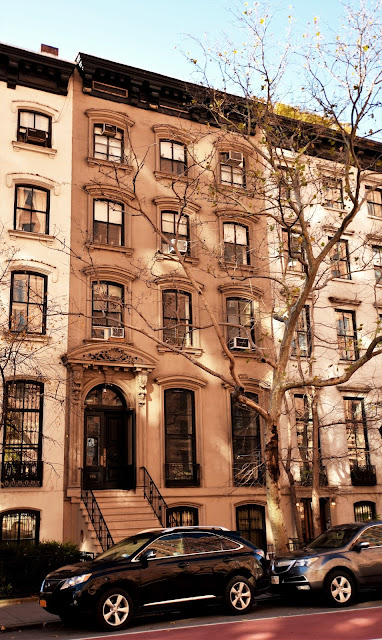 By the 1850s handsome homes rose along the streets which had been laid out across Clement Clarke Moore's family estate, Chelsea.  Max Schwerin was among the first to purchase a building plot on West 23rd Street, between Ninth and Tenth Avenues.

Moore envisioned a high-end residential neighborhood on his land, and he included restrictive covenants in the deeds to ensure a higher class of home.  Max Schwerin's would not disappoint.  He purchased the plot at No. 448 West 23rd Street in 1854 and the upscale residence was completed two years later.

Before the end of the decade the entire blockfront would be filled with similar, Italianate and Anglo-Italianate-style homes.  But the Schwerin house would stand out.  It was slightly taller than its neighbors, and boasted elegant extras which announced that this was the home of a wealthy family.

But the show-stopping element was the elaborately-carved brownstone entrance--an expensive and masterful example of the stone carver's craft.  Leafy scrolled brackets upheld an arched pediment filled with a filigree of vines and leaves.  They surrounded a deeply-carved shell which leaned slightly outside the lines of the pediment. 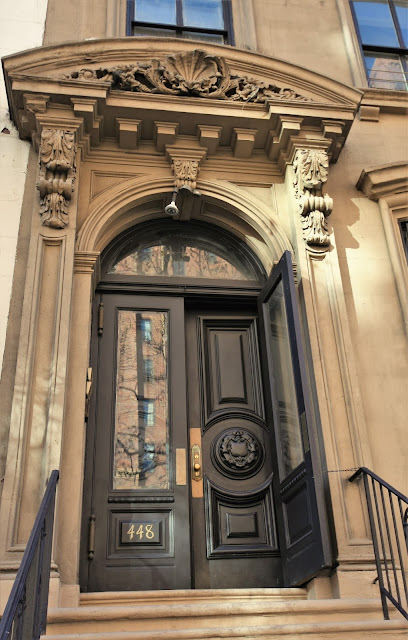 Max Schwerin was highly involved in politics and was elected vice-chairman of the 16th Ward Republicans the same year his new house was completed.  At the "rousing ratification meeting," as described by the New-York Daily Tribune, on the night of July 16, the group resolved "we will not be deterred from asserting and maintaining the rights of American freemen, by either the threats or violence of Southern Ruffians or the sickly apprehensions of Northern doughfaces."

Tragically for the Schwerin family, the violence in the South would claim the life of 20-year old Henry Remson Schwerin.  He died in the battle of Chancellorsville on Sunday May 10, 1863.

By now the Schwerins had left West 23rd Street.  Max had sold the house to Naftali K. Rosenfeld and his wife, Ida, in 1860.   While the war raged in the South, the Rosenfelds welcomed new life at No. 448 West 23rd Street.  On August 26, 1863 they placed an advertisement in The New York Herald which read "Wet Nurse Wanted--A Healthy Wet Nurse can get a good situation in this city by calling at once at 448 West 23d st., between 9th and 10th ave."

Like the Schwerins, Naftali and Ida Rosenfeld would not remain in the house long.  By 1866 it was home to Ziba H. and Marie Louisa Kitchen.  The Kitchens were originally from New Jersey.  Ziba was born in Hackettstown in 1812; and Maria Louisa was born two years later in Newark.  She was the daughter of Moses Ward and Fanny Brown Ward.

Ziba Kitchen was a principal in the dry goods firm Kitchen, Montross and Wilcox.  The successful firm operated from its own cast iron fronted building, designed by James Bogardus, at No. 85 Leonard Street.   As was expected of the wives of wealthy businessmen, Maria Louisa was highly involved in charitable causes.  She had been one of the founders of the Newark Orphan Asylum Association in 1859.


Fannie B. Ward Kitchen married John Clatworthy.  The young bride fell ill in the spring of 1866, and died on Tuesday evening, May 29 at the age of 23.  Her body was brought back to the 23rd Street house for her funeral the following Friday morning at 11:00.

The wealth and status of the Kitchens was exemplified by their golden wedding anniversary celebration on the night of January 6, 1886.  The New York Times reported on the affair, noting "The floral decorations were very beautiful and an elaborate supper was served by Clark."  The article mentioned that 400 guests were present in the house.

Later that year the house would see a much happier event.  Julia Makee Kitchen was the daughter of Marcus Lawrence Ward Kitchen.  She was married in the parlor to Charles Julian Billson on Wednesday, December 20, 1893.  It would be among the last of entertainments hosted by the Kitchen family in the home.

By the turn of the century No. 448 had become home to soap manufacturer John T. Stanley and his family.  Born in London, Stanley had arrived in New York in 1860 and four years later founded the John T. Stanley Company, now one of the largest soap makers in the country.  John and his wife, Susan, had three children, Alfred and John, and a daughter, Margaret.  Both sons would join their father in the family business.  Margaret married educator Charles Howard Parmly in 1898.

Susan Stanley was active in social issues--a diligent member of the Women's Christian Temperance Union, and an officer in the Demarest Branch of the organization.   The group, of course, rallied against the evils of liquor.  But when Susan hosted a regular meeting in the house on December 26, 1900, it caught the attention of newspaper readers nationwide.

The Demarest Branch was in the midst of launching a "vice crusade," the reach of which went beyond the saloon.  The day following Susan's meeting, the Chicago Tribune ran a headline reading "Kiss Held An Intoxicant--Much Too Popular With Girls, Says W.T.C.U. Speaker."

Indeed, Dr. Anna Hatfield had "interrupted a torrent of eloquence apropos of the saloon as the source of all evil to prove that the nectar quaffed from red lips was more fruitful of consequence than any alcoholic beverage ever distilled," wrote the Tribune.

Hatfield told the women in Susan's parlor, "I think kissing is the worst thing a young woman can do, and the amount of hugging and kissing that some girls--of our best families, too--submit to is literally a menace to our morality.  I know a young man well who declares that he rarely leaves a girl without kissing her good-night  He says that they not only eagerly accede to his request, but that several have insisted upon being kissed."

The women sat aghast as Dr. Hatfield explained that she had carefully studied the matter and discovered that many girls felt this was a way to get husbands.  "It is reprehensible.  These are supposedly well-brought-up daughters of rich parents.  The girls must be taught that it is wrong, not only to kiss a stranger, but to kiss the men they are engaged to,  Too great care cannot be taken."

One woman suggested "that an excellent and efficient way to stop the impropriety would be to instruct the young men in the evils of kissing."  The Chicago Tribune reported that her idea was quickly shot down.  "'But they like it,' said one woman impetuously."

The Woman's Christian Temperance Union found other issues to rail against, as well.  At another meeting of the group in the West 23rd Street house, on November 21, 1904, the women voted to denounce advertisements in the subway.  They were equally unhappy with smokers and spitters; and agreed to send a letter to the Metropolitan Street Railway Company "calling attention to the use of the platforms of trolley cars by smokers and the unclean condition of said platforms caused by expectoration."

The family maintained a summer residence at Lake Mohonk, New Hampshire.  The 48-year old Charles Parmly died there unexpectedly on September 7, 1917.  His funeral was held in the 23rd Street house.  Margaret stayed on in the residence with her parents.

Seven years later Susan Stanley died in the summer house, on Thursday, June 26, 1924.  As had been the case so many times in the past, her funeral was held in the parlor of No. 448 the following Sunday afternoon.

In 1928 the City announced plans to widen West 23rd Street.  All "encumbrances" were ordered removed to facilitate the project.  This required the removal of all the high stone stoops along the row.   The entrances were lowered to the former basement levels, and the former doorways converted to windows.  Rather amazingly, the Stanley family preserved the rare carved enframement, and even saved the carved entrance doors.  A wrought iron balconette was installed in front of the grand doors.

Ironically, the plans for the street widening were never carried out and the loss of the many stoops was for nothing.

On January 6, 1935 the 91-year old John T. Stanley died unexpectedly in No. 448 West 23rd Street.  His would be the last funeral to take place in the residence.  Margaret Parmly now lived alone in the venerable brownstone. 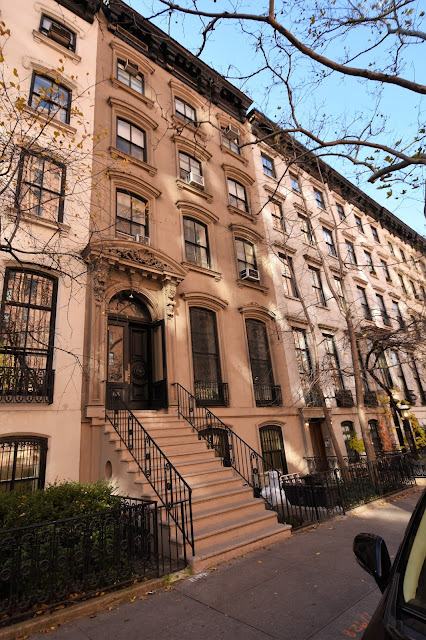 By mid-century the Stanley house was being operated as furnished rooms.  Around 1982 a conversion resulted not only in five apartments within the house; but the restoration of the brownstone stoop.  Although the elegant cast iron parlor balcony has been lost; the Schwerin mansion survives astonishingly intact; a reminder of a time when wealthy families lived on the block and kissing was a shocking evil.