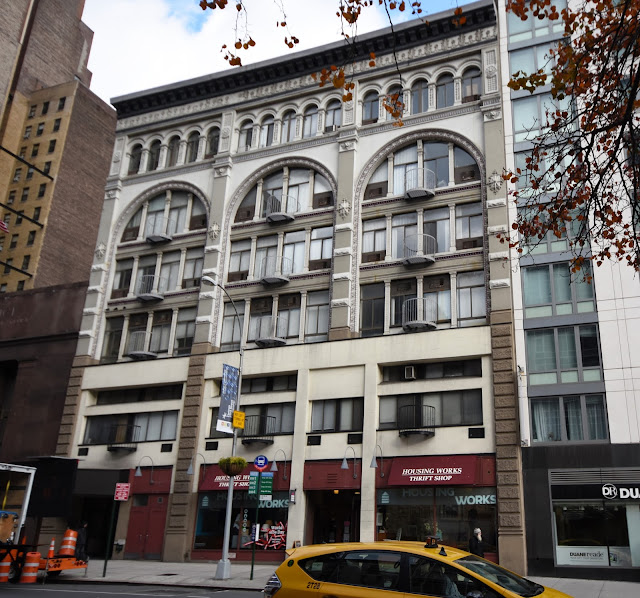 Thaddeus Moriarty arrived in New York with his parents from his native Ireland in 1851 at the age of 8.  He left school when he was 15 and took a job as an office boy.  Within a year he was promoted to cashier and bookkeeper, and then to traveling salesman at just 16.  Although he had learned the dry goods trade, in 1863 the 25-year old partnered with James Jordan to form the furniture retailer Jordan, Moriarity & Co.

In 1897 The Tammany Times would say of him “The same qualities which had made him successful in the service of others brought him success in his own enterprises and his business steadily increased.”  The article noted “In `1889 Mr. Moriarty purchased three lots in East Twenty-third street, between Third and Lexington avenues.”

Twenty-third Street was the center of the retail furniture trade at the time.  Well-known manufacturers and dealers like George C. Flint Co. and Robert J. Horner lined the street with their impressive buildings and showrooms.   Now Jordan,  Moriarty & Co. joined the trend, and commissioned architect Albert Wagner to design what The Tammany Times would call “a magnificent 7-story building” and “one of the largest furniture establishments in Greater New York.”

Wagner filed the plans in September 1890.  The Engineering Record reported that the projected cost of the new building would be $100,000—in the neighborhood of $2.7 million in 2016.  Construction was completed nearly a year to the day later and on September 13, 1891 Jordan, Moriarity & Co. announced its grand opening would be held September 21st through 23rd.

The announcement said in part “We have erected…a new warehouse, built especially for the furniture and carpet trade.  As this is the only house ever designed and erected solely for that purpose in New York city, it is interesting to the sightseer.”  It added that the items offered there were “suitable for the spacious mansion or the modest home.”

Albert Wagner had successfully married the Renaissance and Romanesque Revival styles into a brick, stone, and cast iron emporium.  The boxy proportions of the building were eliminated by three grand arches filled with cast iron-framed openings.  The Romanesque motif was carried out in the heavy cast iron masonry supports, rough-cut stone bands, and the handsome arcade at the top floor.  Renaissance Revival was introduced in the delicate carved panels, the upper frieze and the bracketed cornice. 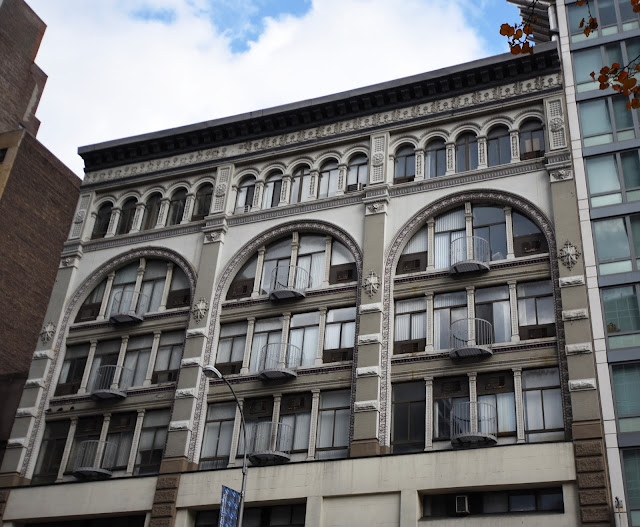 As the firm had promised in the grand opening announcement, it offered both high- and low-end furniture.  In 1893 Jordan, Moriarty & Co. put its brass and enameled iron bedsteads on sale.  A “very neat white enameled and brass-trimmed” bed was being sold for $5, down from $12.  And a “massive white enameled and brass rod-top bedstead” could be had for $7.12.  The sale ad promised it was “worth at least $15.00.”  (The sale price for the lesser-expensive model would be equal to an affordable $136 today.)

In 1913, exactly half a century after starting business, Jordan, Moriarty & Co. was in financial trouble.  In June that year a receivers’ sale was ordered by the United States District Court.   The auction continued for several days, until the entire seven floors of furniture was sold.  The auctioneer’s announcement said in part “This stock consists of High-Grade Furniture, Carpeting, Draperies, etc., and must be sold as speedily as possible, regardless of cost.”  Included, of course, was the fine Jordan, Moriarity & Co. Building.

The building sat vacant for months; and then on April 18, 1914 fire broke out on the fourth floor.  The Insurance Press reported that the flames “spread to roof” and put the damage to the building at $25,000.  The fire-damaged structure was offered at auction by the estate of Margaret Cockburn.

The War Industries Board, formed on July 28, 1917, prohibited the application for new buildings or alterations.  And so the Jordan, Moriarity & Co. Building still sat vacant and charred when the union Trust Company finally sold it to the newly-formed 155 East Twenty-third Street Corporation in June 1918.  It was assessed by the city at just $170,000.

Happily, five months later the War Industries Board authorized the Mayor’s Committee on National Defense to “act on all applications for new buildings or alterations to buildings where the cost of the work ranged between $10,000 and $25,000,” as reported in The Sun on November 16.  The article noted that permission to alter the Jordan, Moriarity & Co. Building was given “for use of the Water’s Hospital Supply Company.”

The alterations were completed early in 1919 and Water’s Hospital Supply Company moved in.  The manufacturer was founded in 1898, making “everything for hospital and surgical work.”  When the renovated building opened the firm employed 93 men and 40 women throughout what was now a seven-story factory.  With proper Edwardian discretion, the women worked only on the second floor.  They were thus shielded from any unsavory language or behavior on the other, men-only, floors.

The upper floors were converted to apartments in 1976.  Perhaps the building’s most infamous resident was Joey Skaggs who lived here by 1981.  A painter and sculptor, Skaggs began earning notoriety in the 1960s with noticeable pranks such as attaching a 50-foot bra to the front of the U.S. Treasury Building on Wall Street in 1969.

While living in Suite 405 here in 1981 Skaggs took on the pseudonym Dr. Joseph Gregor and announced he had created Metamorphosis.  He purported that the “cockroach extract” would cure “arthritis, acne, menstrual cramps and enable people to survive high doses of radiation.”  The hoax, like his others, was intended as a non-malicious prank on the media and public.

Albert Wagner’s storefront survived, rather amazingly, until 2000 when it was removed and replaced with what might be described as grievous.  His upper floors, however, survived embattled but greatly intact from the days when homeowners shopped for brass beds and oak dining tables.