When Samuel Bath Thomas left his home in England in 1874 the Chelsea region of New York City had already become a vibrant, mixed neighborhood.    Half a century earlier the once-rural family estate of Clement Clarke Moore had been cut into building plots as the streets and avenues invaded the property.

By now row houses, churches and businesses lined the avenues and side streets.     The westerly location of Chelsea near the Hudson River, still north of the established business district and many blocks from 5th Avenue, kept property values affordable.  Yet it was also near enough to the Broadway hotels to be advantageous to businesses serving those establishments—like a commercial bakery.

Along with his personal effects, Samuel Bath Thomas brought his most valuable possession—a muffin recipe.   Thomas’s muffin was totally unlike anything American breakfasters were accustomed to and it would lead to his fortune in his new country.

In 1880 Thomas opened his first bakery at No. 163 9th Avenue.     He sold only to commercial establishments, possibly to the discontent of passersby who smelled the aromas wafting from the bakery.   He advertised delivery “to hotels and restaurants by pushcart.”

Before long the demand for Thomas’ English Muffins was such that a second bakery was necessary.  Thomas opened the branch location just around the corner at No. 337 West 20th Street.  What would seem to be a rather surprising spot on an otherwise quiet residential street directly across from St. Peter’s Episcopal Church, was most likely a shrewd move.

The existing brick-and-brownstone building had been built a decade before the Civil War.  A foundry was once housed in the lower levels which would have necessitated large brick ovens.   It was nearly a custom fit.

Thomas renovated the existing building and, perhaps with deference to the neighbors and the church, only slightly altered the Anglo-Italianate street level.  It was possibly at this time that the pressed copper cornice above the first floor was added. 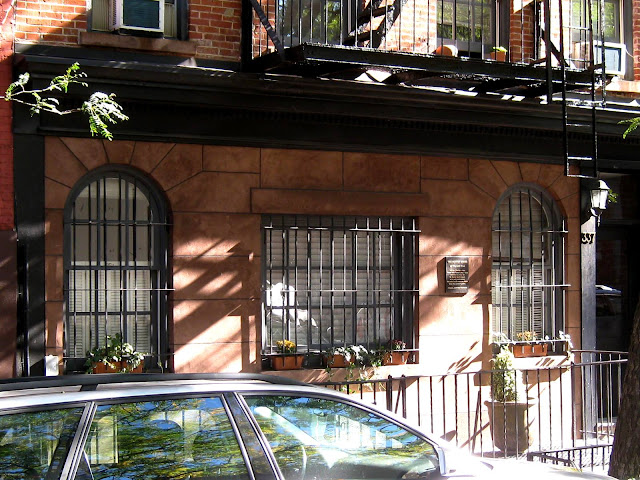 In the basement massive brick ovens stretched back underneath the garden.    From here the Thomas bakery produced the tasty English muffins for decades.

When Thomas died in 1919 his family took over the bakery, later selling the business.   Eventually the West 20th Street location was abandoned and the former bakery became, like the upper floors, apartments.  The great brick ovens under the garden were walled off and forgotten.  In 1952 there were two apartments per floor and any memories of Thomas’s baking operation in the basement were long forgotten.

Then around 2005 Mike  Kinnarie and Kerry McInerney purchased their duplex apartment—the first floor and basement--in the building which was now a co-op.   In July 2006 Kinnarie was in the process of some home improvement and removed an old radiator on the first floor.  In the process some floorboards were pulled loose.

In the darkness below he could see bricks and what appeared to be a door or perhaps a window.  In an act of urban archeology, Kinnarie cut a section from the basement bedroom wall and aimed a flashlight beam into the darkness.  There were Thomas’s ovens—an arched grotto-like brick structure bearing the black scars of years of intense heat.

The co-op at No. 337 West 20th Street has been christened The Muffin House.   The mid-19th century building draws little attention by its unexceptional architecture.  Yet underneath the garden are remnants of a most interesting page of New York and culinary history.

photographs taken by the author
Posted by Tom Miller at 1:44 AM