On March 30, 1931 the elderly spinster, Ella Virginia von E. Wendel died in the house her grandfather, John Wendel, had build in 1856.  When constructed, the mansion at the northwest corner of Fifth Avenue and 39th Street sat in an exclusive residential neighborhood, just a few blocks north of the Astor mansions.  But now it was surrounded by modern business buildings, rushing pedestrians and honking traffic.  The Victorian time capsule in which Ella and her servants had lived was worth what newspapers said was "many millions of dollars."  She had so successfully ignored the 20th century that, according to The New York Times, she had never ridden in an automobile.


On July 15, 1934 The New York Times reported "After withstanding the encroachment of trade for many years the old Wendel house at Fifth Avenue and Thirty-ninth Street will make way for a modern building.  A 5-10-and-25-cent store will replace the faced brick residence, long the home of Miss Ella Virginia von E. Wendel, eccentric spinster and last of the Wendel family to occupy the house."

The article explained that the S. H. Kress & Co. had obtained a long-term lease on the property, and added "Mr. [Claude W.] Kress said the company's architect, E. F. Sibbert, had made preparations for the drawing of plans for the new building."  While Kress executives could not give specifics about the coming building, The Times was able to report "The Fifth Avenue store will be the finest unit in the Kress chain, which extends throughout the country."

Architect Edward F. Sibbert had been elevated to supervising architect of S. H. Kress in 1929.  The "dime store" chain was prospering.  It had opened 58 new stores since 1920 and its 1928 sales reached $414 million in today's dollars.  Because of the low price point of the firm's merchandise, the Great Depression did not negatively affect its bottom line; but improved it.  Sibbert would design 176 Kress stores during the Depression years.

He designed the seven-story Fifth Avenue store and offices in what architectural historian Martin Greif called "Depression Modern" and Ada Louise Huxtable termed "Woolworth Modern."  As the flagship store of the chain, Sibbert gave it upscale elements.  The first two floors were trimmed in bronze--the windows, doors and flagpoles were all cast in the costly material.  The first and second floors were clad in granite, the upper stories in marble.

Samuel Kress, the firm's president, had a keen interest in archaeology and exploration, one that left its mark on No. 444 Fifth Avenue.   Sets of 32 Mayan-type plaques flanked the second floor openings; yet close examination revealed they announced items available inside--jewelry, fabrics and hardware, for instance.  According to Robert Kevin Chastine in his 1997 thesis "Dime Store Deco,"  the soaring mullions of the upper floor openings "end above the roofline in a Mayan headdress motif."

Nation's Business made note of the cost of the Depression Era store.  "In New York, the new store of S. H. Kress & Co. at Thirty-ninth Street and Fifth Avenue, will run into a lot of money--especially as the plans call for a first floor unbroken by a single pillar!"

The completed structure earned Sibbert the Pan American Congress of Architecture's gold medal in 1940, and praise from the Architectural League of New York.

The New York Times, which routinely published long descriptions of significant new buildings, was unusually reserved in announcing the completion of No. 444 Fifth Avenue.  On October 30, 1935 the newspaper reported that the building was completed and had opened two days earlier.  "The store takes up the basement and first floor.  The upper floors, for the time being, will be used for stockrooms."

Inside, Depression-weary shoppers were treated to sleek designs and amenities like a cafeteria and lounges. 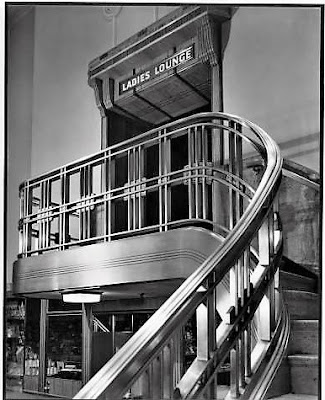 The store was a popular destination for cost-conscious homemakers and newspapers routinely spotlighted the items it offered that would keep a house or apartment up-to-date at a low price.  The Depression was no sooner over than the restrictions of World War II hampered home decorators.  But S. H. Kress & Co. offered help.

On December 20, 1942 Mary Madison titled her article in The New York Times "The Home in Wartime."  In it she gave readers inexpensive Christmas decorating tips, including "rainbow-hued globes of fragile plastic.  These are cents apiece at Kress, 444 Fifth Avenue."

S. H. Kress & Co. received such free publicity for decades.  Journalist Mary Roche told her readers in February 1945 about the "decalcomanias" available in the store.  The "ready-pasted borders" had been used for years to decorate small spaces like cupboard doors.  Now Kress offered larger versions for walls.  "Decalcomanias, of course, are the perfect answer to the amateur who wants a painted motif but cannot draw a line.  And borders can turn remarkable tricks in disguising bad architectural features or pulling together a room and a group of furnishings that are out of scale with each other."

Other items highlighted by The New York Times over the years were the "inexpensive vases designed by Belle Kogan for garden flower arrangements on coffee tables, foyer consoles and other occasional settings," in June 1946; decal strips to apply to the edge of kitchen shelves or canisters, in April 1951; and the plastic-coated shelf paper which pretended to be lace the following year.

On February 1, 1960 four African American college students sat down at a lunch country in a Woolworth's in Greensboro, North Carolina.  When they were refused service at the all-white section, a nationwide backlash was sparked.  It arrived at the corner of 39th Street and Fifth Avenue on February 13, 1960.

That afternoon the Congress of Racial Equality (CORE) picketed both stores.  Demonstrators, both black and white, walked back-and-forth on the sidewalk carrying placards with demands like "End lunch-counter discrimination," and "Support North Carolina students."

The following month, on March 30, the NAACP joined in, staging a similar protest in front of the store against lunch-counter segregation.  It would be a long-fought struggle.  Three years later, on April 20, 1963, The New York Times reported on the "hundreds" who formed "lines of orderly vocal marchers" who picketed as part of the nationwide protest against segregation.  Not all New Yorkers were moved.  The newspaper reported that the Woolworth and Kress customers "appeared indifferent and store managers reported business even better than usual."

In 1972 the store suffered a much different type of protest.  Late on the night of August 18 an incendiary device exploded inside the store, sparking a fire.  It was one of six similar incidents that night and police concluded the bombs had been placed in the various stores prior to closing.   They were planted by the Puerto Rican Revolutionary Movement as part of its efforts to gain independence.  Unlike at some targets, the damage to S. H. Kress & Co. was relatively minor.

Although S. H. Kress & Co. on the whole was operating at a profit in 1977, the Fifth Avenue location was losing money.   On September 16 the firm announced it would close the former flagship store.  Two years later, on November 8, 1979, The New York Times architectural critic Ada Louise Huxtable lamented the passing of the five-and-dime store in general.  "It was not the marketing of opulence.  It catered to anything except expensive excess.  It was an idea based on frugality and the most for the least.  It was, in fact, a matter of nickels and dimes; it was that great American institution, the five and ten."

Huxtable continued "The flagship stores of two of the largest competing chains--Woolworth and Kress--now stand empty at opposite corners of 39th Street on Fifth Avenue...The two silent stores symbolized the end of an era."  She mentioned Sibbert's details:  "granite, stainless steel, bronze and baked enamel, and deco details that look like the tops of palm trees in the sunrise."

Those details would not survive much longer.  In 1981 Republic National Bank began gobbling up the Fifth Avenue real estate between 39th and 40th Streets, including the Knox Hat building, its headquarters since 1965.  On July 27, 1981 the bank promised only that the Knox building would not be demolished.


On April 16, 1983 The Times reported "In homage to the heyday of 5-and-10-cent stores, a city crane this week sidled up to the former S. H. Kress store on Fifth Avenue, near West 39th Street, and stripped the facade of its glories--six black marble Art Deco panels and six limestone crests carved with a classic Greek honeysuckle motif.  They were carted off at the direction of the Landmarks Commission, which will also rescue the Kress Building's four handsome brass doors, two of them revolving."

The LPC's interest in those elements was not matched by its concern for the structure in general.  According to Robert Kevin Chastine "There was a fight to save the Kress flagship store, but only one person on the New York Landmarks Commission saw the significance of the building.  Therefore, the building was demolished on the grounds that the building could not be designated a New York landmark because S. H. Kress Company was not a New York Company."

The Republic National Bank, which wraps the Knox Building, replaced the other structures on the block with its soaring glass tower.