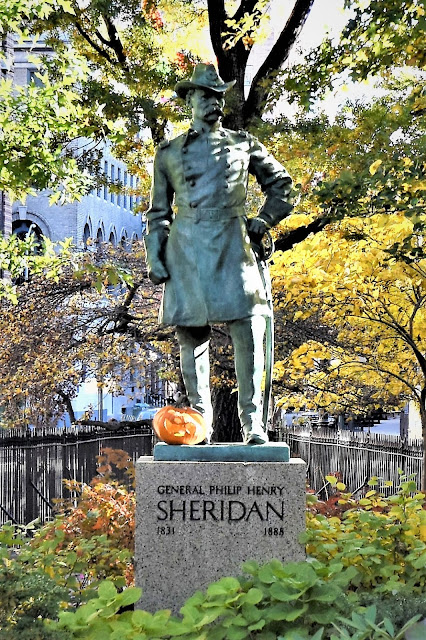 On March 7, 1896 The New York Times reported "The Aldermanic Committee on Land, Places, and Public Parks decided yesterday that the strip of land bounded by Barrow, Christopher, Grove, and West Fourth Streets should hereafter be known as Sheridan Square, in honor of Gen. Sheridan."  The boundaries given were confusing at best--Christopher, Grove and Barrow Streets all run essentially parallel to one another going east and west; leaving only one north-south border, West Fourth Street.

And the area was not "a strip of land," but two distinct triangular spaces with nothing in common.  Eventually the southern and smaller section--essentially little more than a traffic island--took on the name Sheridan Square; while the larger bordered by Christopher, Grove and West Fourth Streets, became Christopher Park.

Confusion aside, the gesture to honor Sheridan was well deserved.  Born in Albany in 1831, he was invaluable in the Union's Civil War victory.   A brilliant military tactician, his defeat of the Confederate Army in the battle of Cedar Creek inspired Thomas Buchanan Read's poem "Sheridan's Ride."

In 1865 Sheridan defeated General George Pickett at Five Forks, Virginia, hastening the end of the war.  But rest was not to come.  Immediately following the war's end he was promoted to major general and sent to Mexico where the uprising against Emperor Maximilian I was taking place.  Afterward, in 1884, he was made commander-in-chief of the U.S. Army.  He died of a heart attack in 1888 at the age of 57.

Nearly four decades later, in 1924, John B. Trainer, the former secretary of the Armory Board of New York City, organized the General Sheridan Memorial Committee.  A public fund-raising effort eventually raised $6,000 for a bronze statue (more in the neighborhood of $86,000 today).  The hardships of the Great Depression were no doubt responsible for the slowed inflow of funds and it would be another 12 years before the work was completed.

The committee commissioned Sicilian-born sculptor Joseph Pollia to design the monument.  (Pollia had arrived in America at the age of two in 1896, making him essentially an American artist.)  The choice was most likely influenced by Pollia's moving Richmond Hill World War Memorial in Queens.  Titled My Buddy and dedicated in 1925 it depicted a grieving soldier standing before the grave of a fallen comrade.

On July 21, 1936 the statue was put in place, although the formal dedication would not happen for another three months.   The New York Times wrote "Joseph P. Pollia, the sculptor, took four months to complete the statue.  In full Union Army regalia, booted and spurred and with a sword dangling at its side, the figure faces the entrance to the park."   That park was not Sheridan Square, as might have seemed fitting, but Christopher Park; most likely chosen because it was not only larger, but more visible. 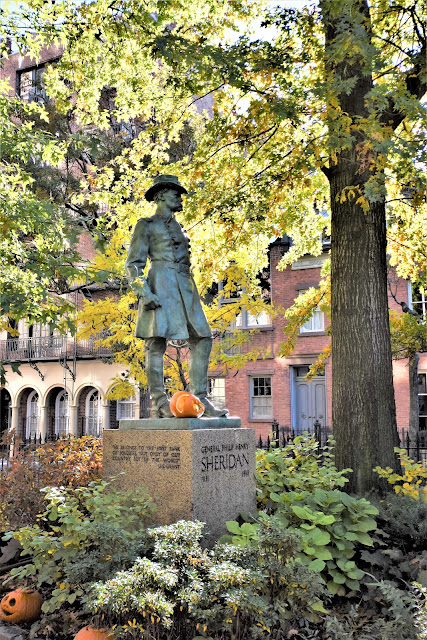 Pollia's seven-foot statue stood on a six-food granite pedestal.  It broke away from the tradition of military figures astride noble steeds and presented Sheridan not in battle, but in a more contemplative pose.  Bronze letters on the front of the pedestal simply gave the general's name and dates; and on one side a quotation, attributed to General Ulysses S. Grant reads:


He belongs to the first rank of soldiers; not only of our country but of the world. U. S. Grant

On the other side an inscription reads:

Erected by the General Sheridan Memorial Association and his comrades of the G. A. R. 1936

Within the granite base was a box containing the names of all those who had donated to the memorial.

The dedication ceremonies had been delayed until October 19 for good reason.  That date was the anniversary of the battle of Cedar Creek.  The statue was unveiled by veterans of the Grand Army of the Republic.  Speakers that afternoon included Colonel Ulysses S. Grant III, the grandson of the former President; General Louis W. Stotesbury, former Adjutant General of New York State; and Colonel Alfred E. Stacey, former commander in chief of the G. A. R.

The statue of General Philip H. Sheridan became a sort of centerpiece for the immediate Greenwich Village neighhood.  Throughout the decades it understandably led to Christopher Park's being commonly referred to as Sheridan Square.  (The actual Sheridan Square remained a rather unsightly and ignored traffic island for decades.)

The statue was conserved by the ungainly-named City Parks Foundation Monuments Conservation Program in 2000.  Much of the funding was provided by a campaign led by Robert W. Lord, who could count four Union soldier among his ancestors.  A second dedication ceremony was held on October 29, 2000, 64 years to the day after the original.  As had been done in 1936, a time capsule containing the names of the contributors was buried near the base.

The statue stands today within its own fenced enclosure within the park, surrounded by foliage.  One of nine statues of Civil War generals in City parks, its depiction is perhaps the most human.