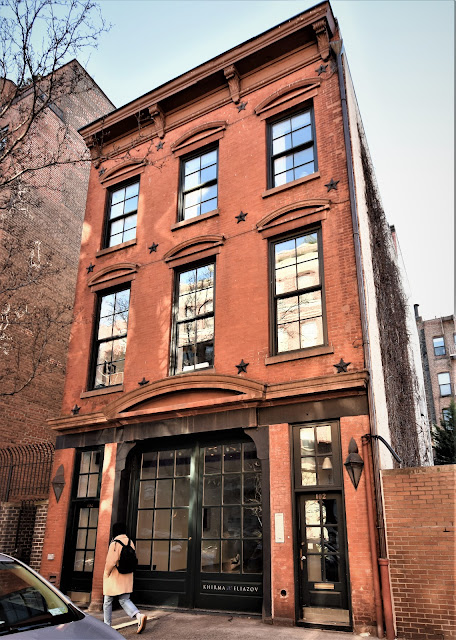 In 1854 volunteer companies made up Manhattan's fire fighting force.  Their members, who all had other jobs, lived near their firehouses.  Called "laddies," they scrambled to the station on alarm of fire.  That year a new group, Columbian Hook and Ladder Company No. 14 was organized in Greenwich Village.

The property at No. 96 Charles Street, nearby the new police station at No. 100, was deemed a good location for its firehouse.  In June 1855 a Board of Aldermen report recommended the property as the new firehouse.  It was owned by Samuel D. Chase who lived nearby on West 11th Street.  Only months earlier he had completed a house on the the site with a stable in the rear.

If the need for a new fire company in the immediate neighborhood was ever in doubt, a fire one month after the Aldermen's report may have eliminated the question.  Ironically, the blaze which broke out around 2:00 on the afternoon of July 16 was in the stable behind No. 96 Charles Street.  It caused damages of about $100--nearly $3,000 today.

This would not be the first time the city's architect was tasked with converting a residence into a firehouse.  In 1854 an upscale home at No. 269 Henry Street was transformed for Americus Engine Company No. 6.  The Charles Street house, too, would emerge as a handsome firehouse.

The renovations were completed in 1857.  As was typical, large, centered bay doors were flanked by entrances.  The arched stone pediment over the bay doors was echoed above the upper windows.  An understated sheet-metal cornice crowned the design.

The ground floor held the company's brand new truck, constructed by Pine & Hartshorn in 1856, and its team of sturdy horses.  The second floor held a dormitory, a library, and a "grand meeting room and parlor."   The top floor housed equipment including racks for drying hoses, for instance, and a "trunk room."

Members of the Columbian Hook and Ladder Company, No. 14 represented a wide variety of mostly blue collar jobs.  The 1857 roster includes clerks, cartmen, three ice dealers, several carpenters, two painters, a locksmith, a bookbinder and a grocer.  There were also one silversmith and a jeweler in the group.  The "laddies" came and went as their schedules demanded; but one member, Peter W. Fraleigh, lived here full-time.

A few weeks after the Civil War broke out Colonel Elmer E. Ellsworth, a personal friend of Abraham Lincoln, organized the 11th New York Volunteer Infantry Regiment, composed entirely of fire fighters.  Several of the member of Columbian Hook and Ladder Company, No. 14 joined the unit known popularly as the Fire Zuoaves.

The group quickly saw action, winning a battle in May 1861 almost immediately upon arriving in the South.  The enemy's flag was sent home.  On June 1 The New York Times reported "The first Confederate flag taken in Virginia by the Fire Zuoaves, will be hoisted, union down, under the Stars and Stripes, on Sunday morning, at 10 o'clock, on the house of No. 14 Hook and Ladder Company, at No. 96 Charles-street."

The firefighter soldiers would return home to a changing fire department.  The Act of 1865, enacted on March 30, coupled Brooklyn and New York with a paid “Metropolitan District” fire department.  The volunteer companies were disbanded and No. 96 Charles Street became home to the new Hook and Ladder Company No. 5.

The unit's importance in squashing the many fires in the district was evidenced in January 1884 when the Fire Commissioners decided to "double up" Hook and Ladder Company No. 5 by providing an additional truck and "a sufficient additional force...to man the reserve apparatus."

Most fire houses acquired a mascot and Hook and Ladder Company No. 5 adopted Ginger in 1882.  The New York Times described him as "a nondescript dog, pedigree unknown."  The mutt was a favorite among neighborhood girls who "stopped at the truckhouse on their way to and from school for a romp with 'Ginger.'"  But Ginger was more than a playmate, he was a true fire house dog.

"Ginger was essentially a fireman's dog and took an almost human interest in the affairs of the company.  He was prompt to answer alarms of fire, and when the truck rolled out of the quarters his short, sharp bark mingled with the gong's louder tones as he ran at the head of the horses," wrote The Times.

But then, on November 17, 1888, 16 years after the dog first arrived at the firehouse, The New York Times ran the headline "Ginger Is No More."  Ginger was "taking his constitutional walk in Bleecker-street," the day before when he was run over by a truck.  A policeman, recognizing that the dog's wounds were fatal, ended its misery by shooting it in the head.

Ginger's body was laid out with dignity in the side yard of the firehouse.  "When his death became known yesterday to the school children they thronged to the truckhouse for a last look at their pet."  He was buried there the following day.


The galloping horses pulling the heavy fire equipment presented a danger to vehicles and pedestrians despite the loud gongs of the trucks' bells.  When a fire erupted at No. 8 West 13th Street on the afternoon of November 18, 1901 Hook and Ladder Company No. 5 responded.  Mrs. Mary Smith, a missionary of the Church of the Strangers, stepped into the street directly in the path of the charging fire truck.

The Evening World reported that the driver "tried to save her" by veering the truck; "but the horses knocked her down."  The fire truck then ran directly into a street car.  Hook and Ladder Company No. 5 never made it to the fire and Mary Smith was removed to St. Vincent's Hospital.

The company appeared in the press most often, however, for the heroics of its members.  Such was the case on March 9, 1921 when fire tore through the apartment of J. W. Ferrington at No. 249 West 11th Street.   Ferrington was an invalid, unable to get out of his smoke-filled rooms.

Fire fighters broke in the door to find that "flames were sweeping across the rooms," according to The Evening World.  Fireman Hogan dropped to his hands and knees and felt his way through the apartment.  Other fire fighters aimed their hose directly on him.  "The only possible manner by which he could penetrate the flames and smoke was by the protection of streams of water constantly played upon him, and in this manner he went from room to room."

Hogan finally found Ferrington, who had managed to tumble out of the bed.  He was crouching by a window, trying to breathe.  The newspaper reported that Hogan "dragged him to the hallway, the water drenching both throughout their progress."

In the meantime, the fire spread to two apartments on the floor above.  Mrs. Simon J. Medico was visiting with her 8-month-old son, Simon, Jr. on the fifth floor.  She "became hysterical when she found her way blocked by smoke and screamed from a window."   She managed to climb part way down the fire escape and pass her baby to a neighbor in an adjacent building.

The fire also extended into the apartment of Daniel J. Phelan, whose 16-year-old son, Edward, rushed upstairs after the blaze was extinguished.  The Evening World explained he needed "to assure himself of the safety of two pet canaries and his first long trousers.  The smoke had killed the canaries, and the flames had burned the legs off the trousers."

In 1936 the Charles Street block was renumbered, assigning the firehouse the new address of No. 102.

A five-alarm blaze on June 20, 1942 wrecked nearly the entire Greenwich Village block bordered by Hudson, Washington, Leroy and Clarkson Streets.  The inferno resulted in 50 injuries to fire fighters, $15 million in damages by today's standards, and the total loss of Hook and Ladder Company No. 5's truck.

At one point, according to The New York Times, "The north wall crashed with a tearing, crunching sound and a barrage of flying bricks...Hook and Ladder Truck 5, stationed at 102 Charles Street, and accordingly one of the first pieces of apparatus to respond, fared worse than any of the men."  The truck had been pulled "close in" on Leroy Street.  When the wall smashed down, it flattened the fire truck.  Amazingly, warned by a large crack that appeared in the masonry, all of the fire fighters escaped.


As had been the case in the 1880's, Hook and Ladder Company 5 had a mascot.  This one, named Prince, was no mutt like Ginger, however.  He was a pedigree Dalmatian--the iconic fire house breed.

The men of Company 5 held their dog in such high esteem that they entered him in the special fire dog category in Brooklyn Kennel Club Dog Show on December 3, 1949.  A month earlier, on November 24, The Times reported "Firemen are stealing a little time from polishing brass these days to groom their Dalmatians for the special competition."

Fire Chief Joseph J. Scanlon tried to discourage the practice of fire dogs, telling a Times reported "Officially, the department has no interest in dogs," adding "A firehouse is no longer a good place for a dog in these high-powered, mechanized days.  They may fall off the speeding trucks answering an alarm, or get run over or they sometimes get lost in the crowded city.  The average life of a firehouse dog is not much more than one year today, I'd guess."

The cold water the chief threw on the event did not discourage the men of Hook and Ladder Company No. 5.  Prince was shown at the show by Fireman Leonard Smith.  Because it was a special category, no award was given.


It was cats which caused problems to the fire fighters 11 years later.  In the fall of 1960, unknown to the men, two feral cats took up residence in the basement.  One had a litter of kittens there.  They were not the only new residents.

On September 11 the men began scratching.  One by one they showed signs of bites until, as reported by The New York Times, "After two days of scratching, the company captain, Benjamin J. Ciranna, complained to Battalion Chief Cornelius P. Harrington."  Chiefs Harrington and Otto H. Knochenhauer went to the firehouse to investigate.  They were promptly bitten.

A Fire Department spokesman said "investigation proved the invaders were not gnats or mosquitoes but straight out-and-out fleas--the dog type."  The firehouse was vacated.  The Times quipped "The twenty-five officers and firemen of Ladder Company 5, victors over raging holocausts, collapsing walls and barricades of beams, have been forced to retreat before an ignoble enemy--an army of fleas."

The truck and its men were temporarily lodged at Engine Company 24 at No. 78 Morton Street.  Pioneer Exterminating Company spent three days in the firehouse, fumigating it with a "machine vaporizer."  The firefighters returned home on September 16.

The 136-year history of No. 102 Charles Street as a firehouse came to an end in 1993.  A renovation, completed the following year resulted in a store at street level and one apartment each on the upper floors. 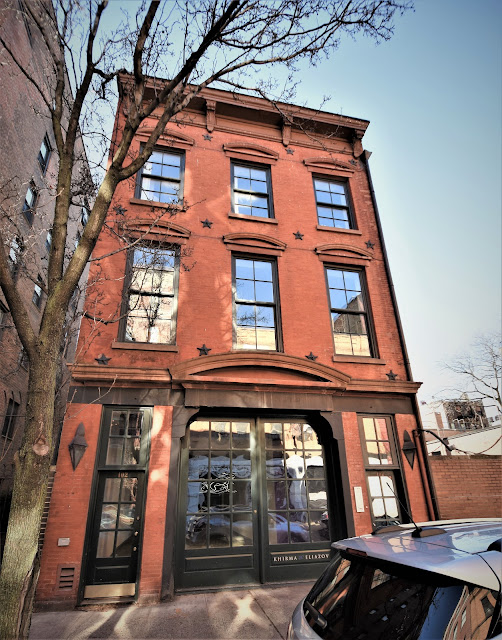 For years the ground floor, formerly home to horses and then motorized fire trucks, held the Plane Space art gallery.  It houses an upscale handbags and accessories boutique today.