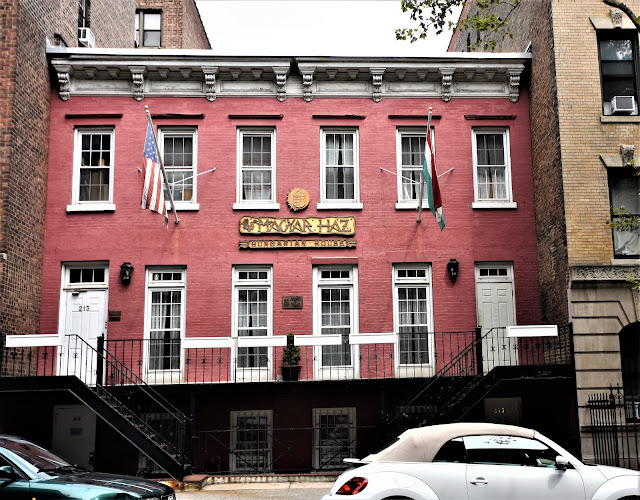 The mirror-image brick-faced houses at Nos. 213 and 215 East 82nd Street were built around the time of the Civil War.  Stone stoops led from the sidewalk to the parlor floors.  Their single-doored entrances and two-story heights identified them as homes for middle-class residents.  Both wore typical wooden Italianate-style cornices.

In 1873, when No. 215 was offered for sale, the bulk of Manhattan's German population was still centered in the Lower East Side.  The advertisement described "A neat two story and basement brick House, in excellent order and containing all the modern improvements."

The house next door was being operated, at least in part, as a rooming house.  An advertisement in The New York Herald on May 10, 1874 offered "A pleasant and nicely furnished room--good location; home comforts; moderate rent; five minutes from Central Park."

No. 213 seems to have been owned by John Bernardin Marin Lesieur at the time.  He died on September 24, 1874 and his funeral was held in the house two days later.  His death notice in The New York Times mentioned that he was the "eldest son of John B. Lesieur, of Paris, France."

In 1881 No. 213 was purchased by Francis McQuade, a real estate developer and builder.  The transaction came at a time when German immigrants were beginning to move northward into the Yorkville neighborhood.  Within a few years the both houses were acquired by the Central Turn Verein--a German social club.

The now-combined structures were used for a variety of purposes, such as the ceremony which took place on April 24, 1899.  The New York Times reported "Roundsman [i.e. patrolman] Louis C. Wagner will be presented with a gold medal for meritorious conduct at the Adams fire.  The presentation will take place in the Central Turn-Verein Hall, 213 East Eighty-second street."

And five months later, on September 24, the newspaper announced "The fair of the Central Turn Verein, to be held for the benefit of the German school conducted by the verein, will open at 8 o'clock this evening in the rooms at 213 East Eight-second Street, and will continue until Oct. 1."

At the time the Turn Verein was finishing construction a lavish new headquarters at the corner of 85th Street and Lexington Avenue where it would move before the end of the year..

Simultaneously the "Great Economic Immigration" had begun.  At the turn of the century an estimated 1.7 million Hungarians entered New York Harbor.  This wave of Hungarians left their homeland almost entirely for economic reasons.  A significant number settled in Yorkville where Hungarian-language churches, newspapers and social clubs emerged.

The Central Turn Verein retained possession of Nos. 213-215 East 82nd Street and in 1912 was still listed here; most likely using the facility as an auxiliary space.  At some point the stoops of the houses were removed and an iron balcony installed to connect the entrances.

But the German population of Yorkville dwindled more quickly than the Hungarian and on September 9, 1966 the Central Turnverein of the City of New York sold the 82nd Street building to the American Foundation for Hungarian Literature and Education.  The organization had been formed three years earlier by the Széchenyi István Society, the American Hungarian Library and Historical Society, and the Hungarian Catholic League.

The building was named Magyar Haz, or Hungarian House.  To ensure that the property would forever remain in Hungarian hands, the Articles of Incorporation restricted ownership rights to "organizations with similar objectives."  Because ownership was still held by the three founding organizations, the perpetuity of Hungarian control was further guaranteed through a clause demanding that all three co-owners agree to a sale.

The Hungarian population in Manhattan had swelled following the 1956 revolution against the Communist regime.  More than 200,000 refugees fled their homeland as the Soviet military invaded Budapest, killing in total 2,500 Hungarians.

Among those fleeing the peril was Jozsef Cardinal Mindszenty.  He had been imprisoned for life in 1948, but was freed by freedom fighters in 1956 and sought refuge in the United States Embassy.

On September 29, 1973 The New York Times reported "Jozef Cardinal Mindszenty, the 81-year-old exiled Primate of Hungary, was reunited at Kennedy International Airport last night with 200 Hungarians who fled to the United States in 1956 following the Hungarian uprising."  The following May he visited what was by now known as Hungarian House.   A bronze plaque memorializing the event is affixed to the facade.

The Hungarian House offered services like English classes to the community, as well as lectures, concerts and exhibitions.  It kept the ethnic traditions alive, as well.  When The New York Times ran an article in 1992 entitled "Keeping Budapest Hopping," and reader wrote back saying "it is not necessary to travel to Hungary to attend a Hungarian Tanchaz [i.e., folk dance].  Tanchazs are held approximately once a month at Hungarian House." 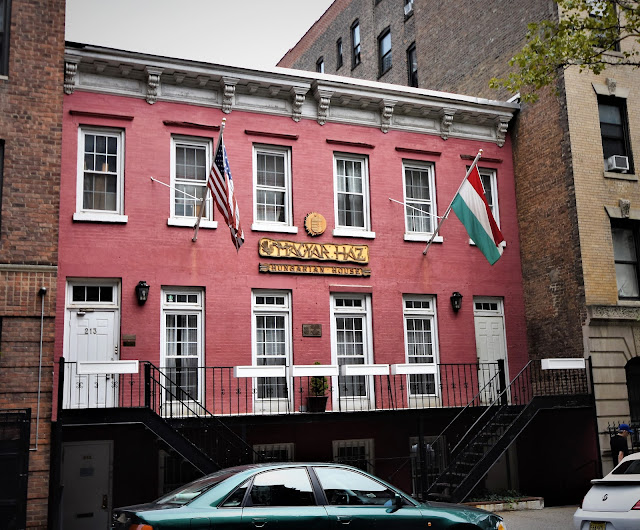 The little brick Civil War period residences continue to house Hungarian House.  Its website explains that while times change, the objectives of the facility, in essence, have not.  "Today's immigrants and visitors come from different backgrounds and have different needs than Hungarians of the major immigration waves did.  Yet the goal remains the same; to maintain Hungarian culture and acquaint American society with it."