In 1699 construction began on the third of New York's City Halls.  Sitting on Wall Street at the head of Broad Street, it was completed the following year and would be the site of some critical moments in the forming of America.  Here the concept of our venerated freedom of the press took root when, in 1735, John Peter Zengel was tried and acquitted of libel against the Crown.  And in 1765 the Stamp Act Congress met here, starting the movement against taxation without representation.  From its balcony the Declaration of Independence was read to New Yorkers for the first time.   It became the first Capitol Building after the Revolution, saw the first meeting of the United States Congress, and it was here that President George Washington was inaugurated.


The Government abandoned the building when it moved to Philadelphia. in 1790.  It was eventually demolished in 1812; to be replaced  in 1842 with a magnificent Greek Revival Custom House designed by two of the country's foremost architects--Alexander Jackson Davis and Ithiel Town.

In 1856 a small group of wealthy New Yorkers presented the city with a statue of George Washington--the first statue erected in the city since the Revolution.  The straightforward gift, placed in Union Square, caused no civic uproar other than from those who objected to its "idolatry."  Such would not be the case in 1880 when another statue of Washington was proposed.

The new monument would be placed on the steps of the old Custom House--now the Federal Sub-Treasury Building.  The spot was chosen as being as close as possible to the exact position where the first President took the oath of office.  But this was Federal property and although the $35,000 necessary to erect the statue (around $866,000 today) was provided by the New York Chamber of Commerce, approval from Congress was necessary.  Not all members were warm to the idea.

The objection of Representative James Blount, from Missouri, on December 9, 1880 would have prevented the unanimous consent necessary.  He was assailed in session that afternoon by New York Representative Samuel S. Cox, who said "Why an objection should come from my abstract friend I cannot understand...This bill, without appropriating any money from the Treasury, proposes simply to authorize the erection, in a very historic place, of a monument to George Washington, which shall be under the control of the Government, which shall be no disgrace to the country, as some monuments are."

The Chamber of Commerce chose the highly respected John Quincy Adams Ward to design the sculpture.  On October 9, 1883 The New York Times reported that the "erection of the marble pedestal for J. Q. A. Ward's statue of George Washington, in front of the Sub-Treasury Building, is advancing very rapidly."  The architect of that pedestal, Richard Morris Hunt, was as esteemed as the sculptor.

The precise height above street level, like the location itself, had been carefully calculated.  It statue would be at the same level above Wall Street that Washington had stood in 1789.  The newspaper announced that the marble block was inscribed:

On This Site
In the building then known as Federal Hall,
George Washington
Took the Oath as the First President
of the United States of America
April 30, 1789

The unveiling was held on November 25, 1883--the anniversary of Evacuation Day when the last of the British troops left New York.  It was covered by newspapers as far away as North Dakota, whose Bismarck Tribune reported "The unveiling of the statue of George Washington on the steps of the sub-treasury was attended by a brilliant company, including the president of the United States, members of his cabinet, the mayors of New York and Brooklyn, Bishop Potter, Rev. Dr. Storrs, Collector Robertson and Wm. M. Evarts.  George W. Lane, the president of the Chamber of Commerce, opened the ceremonies."

In his 1887 The Youth's History of the United States, Edward Sylvester Ellis recalled "President Arthur stood on the pedestal under an umbrella, held by a friend...By a sharp jerk the governor [future President Grover Cleveland] snapped the slender cord that held the American flags wrapped about the statue, and as the bronze figure burst to view the vast assemblage broke into cheers in which they were quickly joined by the forts whose cannons began thundering the moment the signal was given from the top of the building."

Ward's heroic-sized statue stood 12 feet 6 inches high and weighed 5,900 pounds.  It depicted Washington in the act of taking the oath of office.  Ellis noted "Washington is represented as dressed in the uniform which he bought for the occasion.  A military cloak covers the left shoulder, and falls from the right shoulder."  Ward's depiction of the cloak partially falling away symbolized Washington's leaving military for civil life.  It was at the time the largest statue of Washington in existence.

The marble pedestal itself was 7-1/2 feet high and 16 feet long, bringing the overall height of the monument to 22 feet.  Inside the pedestal was a box containing "specimens of all the coins of the United States, copies of newspapers, records of the Chamber of Commerce, and other matters," according to Ellis.

When the old Federal Hall was razed, the stone slab on which Washington had stood for the 1789 inauguration was removed, inscribed, and embedded in a wall in Bellevue Hospital.  It was brought back and placed in the stone platform directly in front of the Washington statue, protected by a metal railing.

That proved to be a bad idea, however.  On December 10, 1895 The Topeka State Journal reported "The brown stone slab known as the George Washington stone, fixed in the base of the pedestal of the statue of George Washington in front of the sub-treasury is to be removed to save it from destruction."  The following May The Spirit of '76 explained "The stone has yielded to the action of the weather to such an extent that it has been removed to the interior of the Sub Treasury in order to preserve it, and it will be placed in a sealed glass case."

The Washington statue quickly became beloved by New Yorkers and  a destination for tourists.   On a particularly frigid day during the winter of 1890 37-year old Robert Dunlap remove his overcoat and wrapped it around Washington's legs to prevent the President's catching a chill (Dunlap was later committed to the Flatbush Insane Asylum).   The monument was a favorite subject for stereopticon slides, travel guide illustrations and amateur photographers.  One such "camerist" brought Wall Street to a halt on July 23, 1892.

The New York Times described that the amateur photographer who "invaded Wall Street yesterday" as "a trim young woman in a blue suit and a black straw had, and she wanted to get a picture of the statue of George Washington."  The process of doing so was much more of an ordeal in 1890 than snapping a photo on one's phone today.  "So she set up her camera in front of the office where J. Pierpont Morgan reorganizes railroads...and proceeded to cover her head with a cloth and shove slides into the camera after the orthodox fashion."

The feminine photographer caught the attention of the brokers, businessmen and errand boys who populated the busy district.  "Fat men stood in the blazing sunlight and didn't notice how hot the combination of sun above and asphalt pavement below was making them; messenger boys formed an inner circle about the camera, but at what passes as a respectful distance with their kind; truck drivers halted their teams, and curious faces appeared at the window commanding a view of the camera."

None of this distracted the diligent photographer and not until she had exposed a few slides did she fold up the camera, the tripod and gather up her equipment.  "And then the crowd disappeared as quickly as it had assembled," concluded the article.

Two New Yorkers became dismayed at the aged look their beloved statue had acquired in the decade following its unveiling.  And so on Christmas Eve morning they took matters into their own hands to correct the problem.  Their good intentions were sadly misguided, however.

The Pennsylvania newspaper, the Freeland Tribune, reported "Such people as walked down Wall street at 9 o'clock this morning saw an act of vandalism.  Two colored men, with long handled brushes, were scrubbing the statue of George Washington in front of the Sub-Treasury building, and removing all the beauty which time and weather add to all bronzes."

Stock broker Henry T. Chapman, "who owns many masterpieces of art," told a reporter from the New York Mail and Express "The glory of pieces in bronze is the potine [patina] which the wear and tear of the atmosphere puts on them.  It takes years to accomplish this.  I have watched with great interest the growth of potine on the Washington statue, and was astonished this morning to see the men scrubbing the statue and removing potine.  You would never see such a thing in Europe."

The well-intended vandalism was stopped at the neckline, leaving Washington's head a musky green and his body a brilliant bronze.

The patriotic iconography created by Washington's pose and location was not lost on politicians, social advocates and publicity men.  It was repeatedly the scene of war drives, political stomping, and the subject of political and social cartoons. 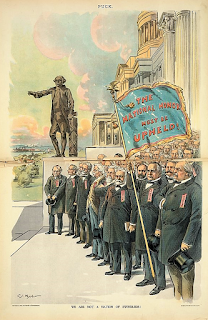 Motion picture star Mary Pickford stood at Washington's feet on April 11, 1918, megaphone in hand as she implored a crowd to buy War Bonds.  The New-York Tribune reported "More than 20,000 persons were swayed by the film star's smiles and patriotism as she stood in the shadow of George Washington's statue."  She told the masses that subscribing to the Liberty Loan they would "drive nails in the Kaiser's coffin."

So popular was the statue that in an article on George Washington on October 31, 1935 the North Carolina newspaper, the Roanoke Rapids Herald wrote that the "two monuments most often visited in a spirit of veneration not only by Americans but by visitors from all nations" were the Washington Monument in D. C. and the Wall Street statue.

As was the case in World War I, the second World War drew speakers to the steps of Federal Hall and George Washington.  On May 1, 1942 The New York Times reported that "at the base of George Washington's statue, several speakers yesterday compared the nation's present difficulties with the problems confronted on April 30, 1789, when the country inaugurated its first President and proceeded to overcome obstacles much greater than those growing out of today's war."

As a symbol of America, the statue drew the unfriendly attention of protesters during the Vietnam War.  In September 1963 "electric bulbs, loaded with paint and tar" were hurled at the statue, as reported by The New York Times.  The vandalism was successfully removed within a week.

Four years later the statue was sought out for a more positive, if self-serving purpose.  On October 23, 1967 The Times reported that on "one windy afternoon early this month, five men gathered before George Washington's statue in front of the old Treasury Building at Wall and Broad Streets...They waited patiently while a magazine photographer took pictures, then melted anonymously into the rush-hour crowd."

One female pedestrian "remarked tartly that the statue of the first President seemed an inappropriate backdrop for a cigarette commercial."  It was not a cigarette commercial being photographed, however.  It was Presidential candidate Richard M. Nixon, whose campaign staff saw the monument as a perfect way to project Nixon's patriotism and American ideals.

After 130 years the statue was conserved as part of the overall restoration of Federal Hall which started in 2004.  The project involved "stripping away years of grime and heavy-handed interventions with state-of-the-art laser technology and allowed the sculptor's work to shine by coating it with a lighter brown protective patina," as described in Federal Hall's website. 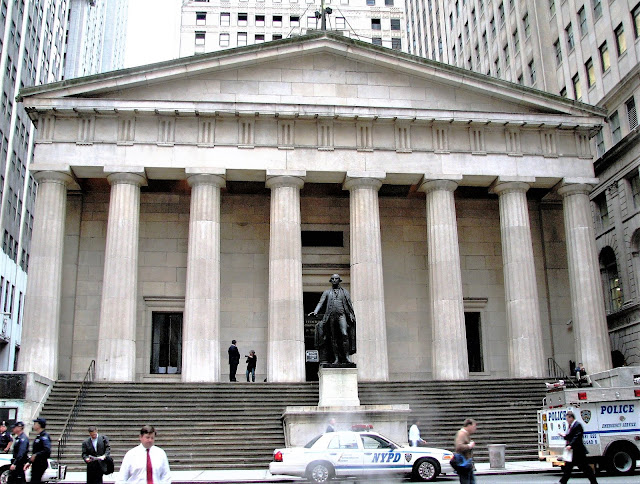 John Quincy Adams Ward's masterful bronze depiction of George Washington remains the centerpiece of the Stock Exchange neighborhood, as popular with New Yorkers and tourists as it was in 1883.
Posted by Tom Miller at 2:33 AM