By the middle of the 19th century imposing homes of Manhattan's wealthiest citizens were creeping up Fifth Avenue towards 23rd Street.  In 1850 mason Joseph Sanford embarked on an ambitious project of constructing five speculative dwellings on the east side of Fifth Avenue, between 19th and 20th Streets.

Even  before construction was completed in 1851 Sanford had sold No. 127 to commercial banker John B. Murray.  No. 125 was sold later that year to portrait painter and miniaturist Thomas Seir Cummings.  The esteemed artist held the posts of vice-president and treasurer of the National Academy of Design.

Cummings' wife, Rebecca, was an amateur artist.  The couple had three children, sons Charles and Thomas Augustus--also artists--and daughter Cora.  The population of the house was reduced by one following Cora's fashionable wedding to Lemuel W. Morse in Trinity Chapel on January 7, 1863.

The Cummings' next door neighbors would have an impressive house guest later that year.  Brigadier General Thomas Francis Meagher recruited and led the Irish Brigade and was highly responsible for the large numbers of Irish immigrants who led support to the Union.  When he briefly visited New York in the summer of 1863 he stayed with the Murray family at No. 127.

Dr. James Chilton purchased No. 125 from Cummings in 1857.  Like many physicians, he was also listed as "chemist," or pharmacist.  Chilton died in 1869, but his wife, Mary, continued to live on in the house.

Mary Chilton was no doubt unnerved when an intruder was found hiding in the house in the summer of 1870.  Thomas Harris, whom The New York Times described as "a mulatto lad," pleaded guilty to the charge of grand larceny,  Judge Thomas Harris was not pleased with the charges.  At Harris's sentencing on August 2, he told the prisoner in part:

The Grand Jury, I regret to say, made a mistake in not indicting you for burglary.  Had you been indicted for that offence and convicted, I should sentence you to twenty years in the State Prison.  I wish the lawless portion of this community to understand that hereafter [I] will hold that any man found concealed in a dwelling-house for burglarious purposes...on conviction will be sentenced to twenty years.

Only two months later it was the Murray house that was burglarized in the same manner.  On October 7, 1870 The New York Times reported "On Wednesday night the residence of Mr. John B. Murray...was robbed by a thief who had secreted himself in the house during the day, and left by the front basement door."

What was utterly amazing was the boldness of the thief.  Because Rebecca Murray was seriously ill, "the house was lighted from top to bottom all night," according to the newspaper.  "Every room was occupied and every room door wide open, and the nurses passing from room to room, as in the day-time."  Nevertheless, the thief tried hard to jimmy open the safe containing the silverware (although he finally gave up), and made off with "large sum of money, a chronometer watch...and a quantity of clothing and jewelry."  The Times concluded "The audacity of the thief is remarkable."

After living at No. 127 for more than 25 years, Murray lost it in foreclosure in 1878.  It was acquired by millionaire Robert Livingston, who did not live in the house, but leased it.  His first tenant was the newly-wed lawyer Robert C. Fellows, who had married Mrs. Phoebe Robertson on February 28 that year.  The marriage would give the attorney serious headaches.

Phoebe had not only neglected to mention that her former husband was not dead; but that they were not yet divorced.  A complex tangle of legalities followed.  Fellows left Phoebe and filed for annulment; and Phoebe briefly returned to her former husband but when he died in the summer of 1879, she and Fellows remarried.  The two were still in court in 1880, however, when they battled over whether or not to continue the original annulment proceedings.

While they tried to explain it all to a judge, Mary Chilton was in the process of selling No. 125.  By now commercial interests were inching up the avenue and before long the ground floors of both houses were converted for business purposes.  In 1881 the society dressmaker and costumer T. W. Lanouette opened her shop in No. 125 and lived upstairs.

Simultaneously, real estate operator brothers Max and Moses Ottinger purchased No. 127 on March 21, 1881 for $44,500--just over $1 million today.  The ground floor shop became home to Edward Favier's European art gallery.  The upscale nature of his business was evidenced when his gallery was robbed by "two well-dressed young men" in February 1883.  The men admired several paintings, including a small piece by Eugene Fichel which was temporarily out of its frame.  Favier had it priced at over $12,500 in today's money.  After they browsed and promised to come back to buy another painting, the Fichel work was discovered to be missing.

Small businesses eventually took over the upper floors of both houses.  In 1894 Herman Bergdorf and Herman Voight opened their tailoring and fur shop in No. 125.  The building was almost demolished in 1903, after Bergdorf hired Alfred Zucker to design an 11-story store and loft building on the site.  The plans, filed in December 1903, projected the cost at $132,000.  But for some reason Bergdorf changed his mind.  In April 1903 he sold the building, which continued to house shops and offices.


On February 4, 1921 the Domestic Lunch Corporation signed a lease for both buildings.  The company no doubt intended to remodel the ground floors into a spacious luncheonette.  But, like Benjamin Bergdorf, it quickly changed course.  Three months later The New York Times reported it had sold its lease to the Shapanka Realty Corporation.  "The new lessee will erect a new five-story and basement building with an elevator at a cost of $50,000," the article noted.

If, indeed, Shapanka Realty intended to demolish the old converted houses, it never happened.  Instead architect Irving Margon stripped off the facades and rearranged the interiors to create a business building behind a 1920's take on neo-Gothic architecture. 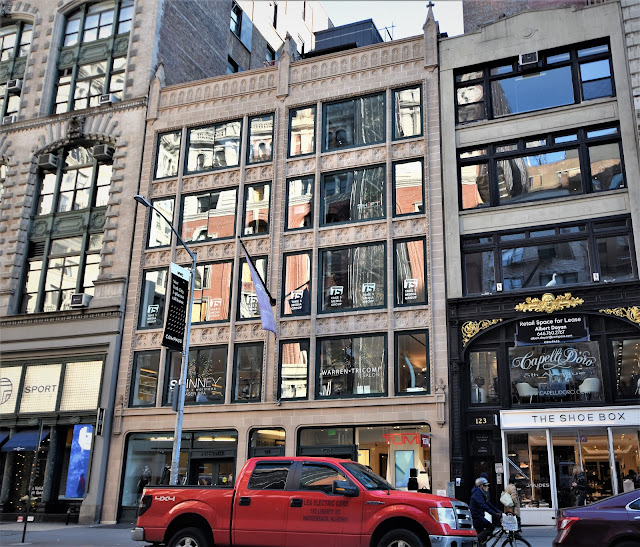 Nestled among tall loft buildings, the joined buildings retained their original height and proportions.  Each address contained a storefront at ground floor, separated by the entrance to the upper floors.  Entire clad in terra cotta, the spandrel panels between each floor featured Gothic quattrefoils.  The parapet, decorated with blind arches and ornamental carvings, sprouted Gothic pinnacles topped with crockets.

The ever-changing Fifth Avenue saw The Mask, a children's theater, in the building in the 1960's and early '70's, followed by China Books and Periodicals in 1972.  It remained through the 1980's.

The 21st century brought expected updates, like replacement windows and a remodeled storefront.  But on the whole Irving Margon's 1921-22 makeover is intact.  That the bones of the combined buildings date back to lavish 1850's residences is impossible to detect.