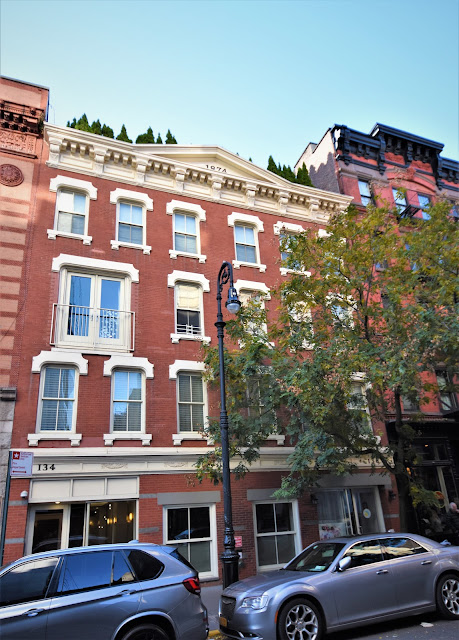 At noon on April 16, 1873 the "Valuable Plot of Ground with buildings" at Nos. 134 and 136 West 10th Street was sold at auction.  There was only one dwelling on the 40-foot wide property.  It was a commodious 25-foot wide brick house which appears by the description (two story, attic and basement) to have been a Federal style structure.  In the rear was a two-story brick stable.

The free-standing house with its grassy yard had been at one time home to a well-to-do family.  That was in evidence when the furnishings were auctioned 12 days later.  The listing included "Rich double and single Parlor Suits, Carpets, Mirrors, Paintings, Engravings, carved black walnut Bedsteads and Bureaus, best hair Mattresses," and such.

At the time Acker, Merrill & Condit Co. owned and operated several high-end grocery stores.  The term "grocery" had little to do with the word we commonly use today.  Acker, Merrill & Co. catered to the carriage trade and stocked a dizzying array of goods--wines, confectioneries, gourmet foods and delicacies, cigars, and personal items.  Founded in 1820, its main competitor now was the equally well-known Park & Tilford.

Nearly a year to the day after the furnishings of No. 136 West 10th Street were removed, Acker, Merrill & Co.'s architect, Charles Wright, filed plans for a three-story brick stable on the site.  Before construction was completed later that year the plans were reworked to include a fourth floor.  Wright's handsome Italianate stable was faced in red brick and trimmed in stone.  The architect distinguished the openings with scalloped lintels with dropped ends and placed delicate brackets below their sills.  The bracketed cornice upheld a triangular pediment which announced the construction date.

The symmetry of the design--upset only by the double-wide hay loft opening at the third floor--was carried on to the street level where two wide carriage bays and two doorways were in perfect balance.

The capacious facility housed Acker, Merrill & Condit Co.'s delivery trucks and horses.  Life for the work animals was hard, occasionally requiring them be placed a discounted prices.  On July 19, 1877, an advertisement appeared in The New York Herald that read "For Sale Cheap--Three horses.  Apply at 134 West 10th st., New York."

Nearly 35 years after building the stable, Acker, Merrill & Co. sold it to Charles F. Hickey of Brooklyn.  Or at least they attempted to.  The firm gave Hickey a $30,000 three-year mortgage on the property--in the neighborhood of $825,000 today.   A year before the term was up, Hickey renewed the entire amount.

Eventually, Acker, Merrill & Co. seems to have given up on Hickey and on December 27, 1918 The Sun reported that it leased the building to the Peerless Trucking Company.   At the time motorized trucks were slowly replacing horse-driven drays on the streets of New York.   By the summer of 1922 Peerless Trucking & Transfer Co. was ready for a total change-over.  At "10 a.m. sharp" an auction was held in the 10th Street stable to liquidate the outdated equipment and the horses.

The auction announcement listed 27 "good work horses," 28 trucks of different types, 22 sets of single and double harnesses, 32 blankets and "all stable utensils."  The auctioneers guaranteed "These horses are young and acclimated and used to all kinds of hard work.  Anyone in need of a first-class work horse should not miss this opportunity."

The old stable continued life as a trucking depot and then as a garage by the late 1960's.  Then, in 2006 it received a remarkable makeover.  The ground floor was converted to a "community facility" while the upper floors became a total of seven apartments.  Among the building's high-profile residents were actor Kiefer Sutherland.

Half of the street level space became home to the Village Preschool Center.  According to its website the facility, for children between 2 to 5 years of age, offers daily French lessons, science, music, and "reading readiness" activities.   "Our graduates are extremely prepared, academically and socially," the website says, "to move on to kindergarten." 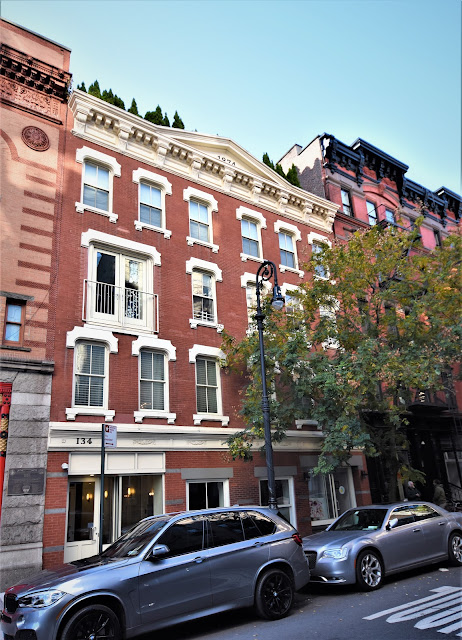 The sympathetic remodeling and restoration of the 145-year old livery stable preserved an important component of the historic fabric of this charming section of the Village.