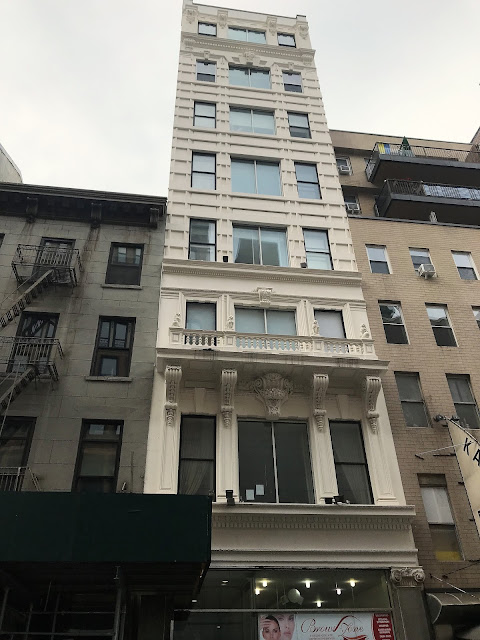 In the spring of 1898, the end was near for the 25-foot-wide Italianate brownstone at 56 East 13th Street.  Once home to Civil War veteran Jeremiah T. Hallett, it would soon become a victim of progress.  On April 9 the Real Estate Record & Guide reported that architect Otto C. Von Schoen was "preparing plans for an 8-story fireproof store and loft building" on the site for Frederick A. Boeckeler.  The article placed the cost of construction at $130,000, or just under $4.2 million in today's money.
Von Schoen's four-part, Beaux Arts design was meant to dazzle.  Two polished granite pilasters with carved stone Ionic capitals flanked the storefront.  The two-story second section was dominated by a full-width balcony supported by robust brackets.  Atop its balustraded railing sat seated lions holding shields.  Von Schoen gave the four-story third section interest by creating a grid-like pattern, relieved only by the splayed lintels and keystones of the seventh floor openings.  The eighth floor sat atop a prominent intermediate cornice.  Intricate brackets with wreaths and swags upheld the now-lost cornice. 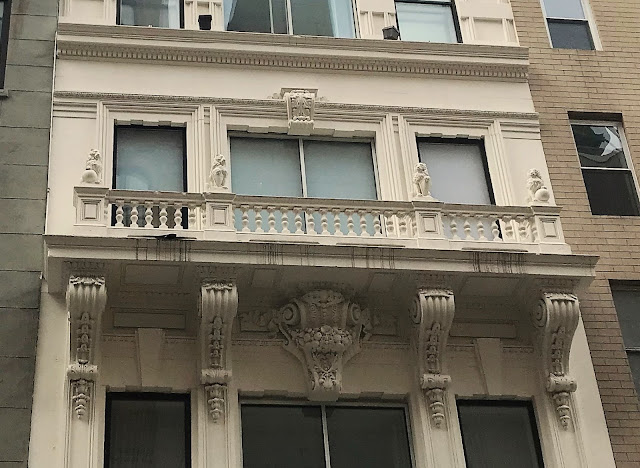 The building filled with apparel manufacturers, like A. Famberg & Co., makers of cloaks.  A fire in its space on May 19, 1901 caused the loss of the equivalent of $31,400 in today's money.  The "fireproof" quality of the construction touted in Von Schoen's plans was proved, however, and the blaze did not spread beyond the Famberg & Co. premises.
All the other tenants of the building that year were cloak and suit makers except R. Goldstein & Co., which manufactured waists--a tailored blouse that was the most popular piece of women's attire in the nation.  The employees of each firm worked a grueling 53 hours per week in uncomfortable conditions.  The largest firm was Hyman & Brown, which employed 4 men, 50 women and one girl under 16.
A succession of garment manufacturers would operate from 56 East 13th Street, including Sol Ehrlich, known in the industry as the Persian Lamb King.  His firm was here by 1909.
The ground floor store was home to Hein Photo Supply Co. in 1915, perhaps the first hint that the garment district was moving northward.  Nevertheless, apparel firms continued to occupy 56 East 13th Street through the Depression years.  One of the last, the American Specialty Leather Company, signed a lease in January 1930.
Change came in 1954 when the Abrahams Magazine Service and the A. M. S. Reprint Company (or AMS Press, Inc.) took over the building.  The printing portion of the vast business republished out-of-print books.  On October 25, 1964, for instance, The New York Times reported that the Columbia University Press had sold the reprint rights "to what is regarded as its second most important series, the English Institute Annuals and Essays."  The article noted that AMS Press, Inc. would be publishing the 13 hardcover volumes the following year.
The Abrahams Magazine Service archived hundreds of thousands of periodicals, some dating back to the 19th century.  In the days before digitization and even microfilm, its massive library of magazines and other publications was priceless.
But the days of microfilm and digitation did come, and the usefulness of the paper periodicals faded.  When owner Gabriel Hornstein was faced with a significant rent increase in 2000, he opted to move the business to Brooklyn.  And in preparation for the move, massive numbers of vintage periodicals were carted away for disposal. 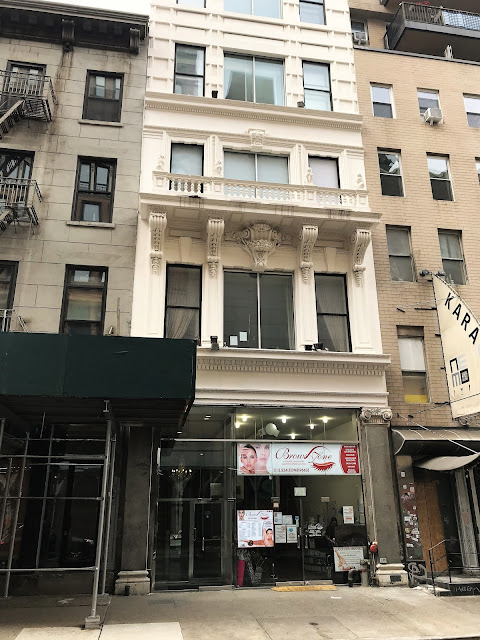 On March 25, 2001, Sherri Day wrote in The New York Times, "By the time the gigantic spring cleaning ends in about two weeks, more than 300,000 publications, many dating to the 1800's, will have been discarded...Each night, the workers push out old United States Postal Service carts filled with popular magazines like Fortune and Vogue, scientific and medical journals, and periodicals on subjects ranging from Slavic literature to psychedelic drugs."
Hornstein stressed that "nothing rare is being thrown out," and noted, "What I'm really agonizing over are things like Scribner's Harper's; they are wonderful American publications."
The curbside carts awaiting pickup drew nighttime treasure hunters, like used book store operators.  Day wrote, "Some bring vans and luggage racks to cart away their loot."  She tried to interview Isaac Kosman, who answered, "I can't talk because I'm so busy digging.  I've got to concentrate on the task at hand."  He did pause long enough to tell her that "his most treasured find was a well-kept Vogue magazine.  He kept the year of publication to himself.  And, he said, he'll be back." 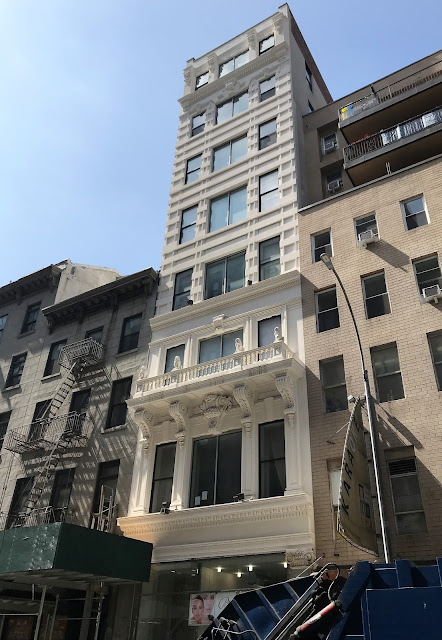 With its tenant of half a century gone, the building was renovated to luxury housing--one sprawling condominium per floor.  The young women who toiled over sewing machines in the lofts could not envision the lifestyles being enjoyed there now.  Sadly, the terminal cornice was lost at some point and a glaringly white coat of paint obscures Von Schoen's 1898 details.  But overall the building survives wonderfully intact.
photograph by the author
no permission to reuse the content of this blog has been granted to LaptrinhX.com
Posted by Tom Miller at 1:00 AM