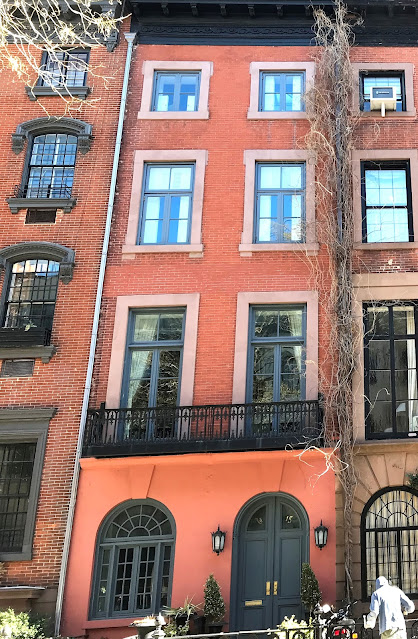 James Franklin Doughty Lanier founded the banking firm Winslow, Lanier & Co.  He had an impressive American pedigree, his earliest ancestor, Thomas Lanier, having arrived with his friend, John Washington, in Virginia in 1655.  James F. D. Lanier owned much Greenwich Village land, and would erect a "terrace" of elegant homes along the south side of West 10th Street in 1856.
A year before starting that project, he leased the three plots on the north side side of the street, Nos. 11 to 15 West 9th, to Henry Pierson, a wealthy iron merchant.  Pierson constructed three handsome Anglo-Italianate homes on the site.  The identical, four-story houses sat upon rusticated brownstone bases.  Their arched doorways, above a short stoop, were perfectly balanced by windows of the same proportions.  Full-width cast iron balconies fronted the second floor French windows and a single bracketed cornice unified the trio of homes.
On October 25, 1856, the year the houses were completed, James F. D. Lanier's daughter Mary was married to John Cameron Stone.  The bride was 22 years old and the groom 30.  Mary was Stone's second wife.  Adeline Emma Bridge Stone had died the previous year, on June 9.  Stone brought two children to the marriage, Lewis Bridge, who was 9 years old, and Adeline Emma, who was 7.
The newlyweds moved into 15 West 9th Street, where they would have two more children.  Elizabeth Gardner was born on March 6, 1859, and Mary Louisa arrived the following year.

The Stones were among the most socially prominent families in New York and Lenox, Massachusetts where they maintained their summer estate.  A hint of the costly furnishings and artwork within their town home can be gleaned by a single sentence published in The Crayon in April 1857.  "J. Cameron Stone, Esq., has purchased, at Rome, Mozier's statue of 'Rebecca.'" 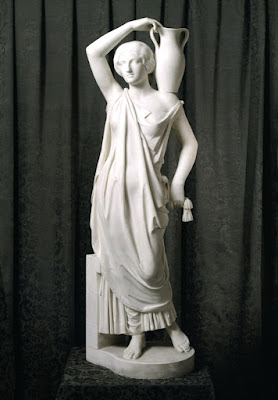 Joseph Mozier's Rebecca At The Well, now in the Chrysler Museum of Art, sat within the West 9th Street house.  image via chrysler.emuseum.com
On June 6, 1862 John Cameron Stone died at the age of 36.  His funeral was held in the drawing room four days later.  Mary Lanier Stone was now a 28-year-old widow and single mother of four.
Lewis Bridge Stone graduated from Yale University in 1868.  The young gentleman embarked on an ambitious trip around the world alone (no doubt with, at least, his valet).  He set off for California, then to Japan, China, and Europe.  In his absence, Adeline was married to Dr. Richard Cranch Greenleaf on June 21, 1870.  The couple traveled to Europe for their extended honeymoon, and made plans to meet with Lewis there.
Mary Lanier Stone received troubling news not long after the wedding.  Lewis had "contracted the malarial fever in Rome," as later reported in the Yale University Biographical Record.  He was too ill to return home, and eventually died there on November 9, 1871 at the age of 24.  The Evening Post reported, "His sister, Mrs. Dr. Greenleaf, of Boston, was with him at his death."
Elizabeth was married to William Benjamin Bacon, Jr. in Trinity Episcopal Church in Lenox on September 28, 1882.  The following year, on March 29, Mary Louisa was married in the West 9th Street house to J. Frederic Schenck.
Mary continued her social routine.  On June 10, 1888, for instance, the New York Herald announced, "Mrs. J. Cameron Stone, No. 15 West Ninth street, has gone abroad, to remain until the autumn."
On December 30, 1893, The New York Times reported on the socially important wedding of Mary's granddaughter, Alice Greenleaf to William Adams, which was to take place in Trinity Church in Lenox on New Year's Day.  The article said the guests "have been arriving ever since Tuesday of this week...Nearly a hundred guests are at the hotel and the cottages near at hand."  The article noted that Alice's parents "formerly lived in Boston, but...have recently made Lenox their home, excepting when in town.  There they stop at Mrs. Stone's house, 15 West Ninth Street."
Mary Lanier Stone was in Lenox in June 1909 when she fell ill.  She died there on July 2, 1909, a little more than a month before her 75th birthday.  Her body was brought back to New York City, and her funeral held in the Church of the Ascension, around the corner from the house that had been her home for essentially her entire adult life.
The following year, on March 22, 1910, Mary's estate sold the house to John J. Bogert and his wife, the former Eliza Horler, "as tenants by entirety," indicating that the Lanier family still owned the land on which the residence stood. 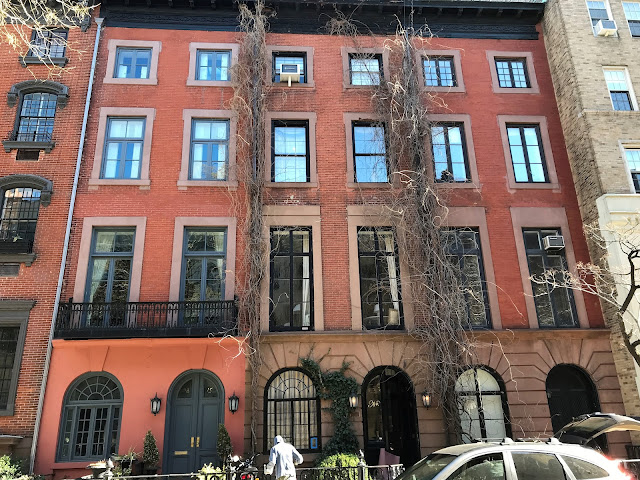 Originally all identical, the two houses to the right retain their rusticated bases.  Only 15 West 9th Street still has its second floor balcony, and sadly all have lost their carved window surrounds.
Born in 1846, Bogert had been in the real estate business before his retirement in 1897.  He and Eliza updated the aging house in 1911 by hiring architect J. H. Knubel to install modern plumbing, and new stairs.  Their residency would be relatively short-lived, however.  They sold the house to Cortlandt Edward Palmer in April 1911 and moved two doors away to 17 West 9th Street where John J. Bogert died on October 6, 1927.
According to the Columbia Alumni News, Palmer was "one of our most active operating and consulting mining engineers."  He and his wife, musician Katherine Van Arnhem Palmer, maintained a summer home in Arlington, Vermont.  The couple's relationship became strained not long after purchasing the West 9th Street house.
Although no legal separation papers were ever filed, Palmer almost immediately began living entirely at the Arlington house.  Katherine later said they lived apart because they were "temperamentally unsuited."  In Vermont, Palmer was close friends with Mr. and Mrs. Halley Phillips Gilchrist--so close that the couple reportedly moved into his home.  But circumstances would later reveal that it was, in fact, only Mrs. Gilchrist who shared the house with Palmer.
He died of a heart attack there on September 2, 1917.  The terms of his will, published in the Bennington Evening Banner on October 23 were shocking.  He left 40 percent of his estate, valued at more than $3 million in today's money, to Mrs. Gilchrist and and equal amount to Katherine.  The will also left Mrs. Gilchrist "my body as soon as I shall be dead, to be disposed of as she may see fit."
The newspaper noted, "Mrs. Palmer announced yesterday that she would contest the will because she felt that to permit it to be probated would 'legalize his manner of living with the woman who supplanted me in his affections."
Katherine Palmer leased the house on May 1, 1918 to J. D. Trenholm, a real estate operator at $1,500 per year (around $25,800 today).   She allowed him to "remodel or repair" the property.  The extent of his renovations is unknown.
In May 1924 Katherine was still engaged in the court case concerning her husband's will.  In the meantime, she had sold the West 9th Street house a year earlier to a "Mr. Swann" for the equivalent of $500,000 today.   It was converted to a multiple-family home in 1957 with a duplex in the cellar and first floor, one apartment each on the second and third floors, and two apartments on the fourth.  It was likely at this time that the 1856 moldings around the windows were shaved off and a stucco-like substance slathered over the rusticated brownstone.  A subsequent renovation completed in 1977 resulted in a duplex on the third and fourth floors. 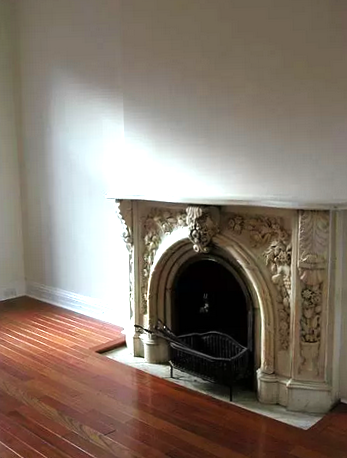 Although most of the original detailing has been lost, exquisite carved marble mantels like this one survive.  image via streeteasy.com
In 2018 the house was returned to a single-family home.
photographs by the author
no permission to reuse the content of this blog has been granted to LaptrinhX.com
Posted by Tom Miller at 1:00 AM