Born in Belfast, Ireland in 1844, Hugh O'Neill was brought to New York as a child in 1844.  Following the Civil War he opened a dry goods store near Union Square, but quickly had bigger plans.  In 1870 he began purchasing property on the west side of Sixth Avenue, between 20th and 21st Street.  Little by little he acquired the entire block front, which he filled in 1887 by his monstrous cast iron emporium, designed by Mortimer C. Merritt.  The Hugh O'Neill & Co.'s commercial palace set the tone for what would become known as the Ladies' Mile.

Around the corner, the 16th Precinct station house at No. 126 West 20th Street would not survive much longer.  Retailers pampered their well-heeled feminine customers with amenities like liveried doormen and stylish lounges.  And they did not expect these women to wrestle with hat boxes and packages on their way home.

The blocks near Sixth Avenue filled with the stables and warehouses of the emporiums.  By 1891 Hugh O'Neill & Co. had demolished the structures at Nos. 124 through 128 West 20th Street and replaced them with a three-story stable.  The no-nonsense brick structure had three large truck bays where horse-drawn drays came and went non-stop throughout the day.  Rough-cut brownstone trim and a row a brick corbels below the cornice borrowed from Romanesque Revival gave the structure a medieval flavor.

By now the O'Neill department store employed a staggering staff of 2,500.  The employees working in the stables included drivers, stable boys, grooms, packers, warehousemen, and others.  On November 7, 1891 an advertisement in The Sun hinted at the specific jobs performed here.  "Experienced Drivers and Harness Cleaners Wanted.  Apply at O'Neill's Stables."

When Hugh O'Neill died in 1902 retailers were rapidly abandoning the Ladies' Mile and moving northward.   The O'Neill operation was absorbed by the Adams Dry Goods store immediately to the north; but by the outbreak of World War I the business was closed.

On December 13, 1919 The Sun reported that "The old O'Neill stable property...has been sold.  The purchaser is W. K. Rankin, in the trucking business."  Rankin paid $100,000 for the building, nearly $1.4 million today.  Interestingly, he put the title in the name of his wife, Anna.

The following year the Rankin Trucking Co. hired architect George M. McCabe to do $15,000 in renovations.  The modifications, including new beams, columns and ramps adapted the building from a stables to what the Record & Guide now termed a garage.

Only two years later more improvements were made.  In July 1922 architect Louis A. Sheinart made $10,000 in renovations (about $143,000 today), installing a new elevator and concrete flooring, and a "fire-retardant" ceiling.

It appears that the Great Depression took its toll on the Ranking Trucking Co. and it was lost to the Greenwich Savings Bank in the mid 1930s.  The bank sold it in 1937 to the newly-formed 124 West Twentieth Reality Company. 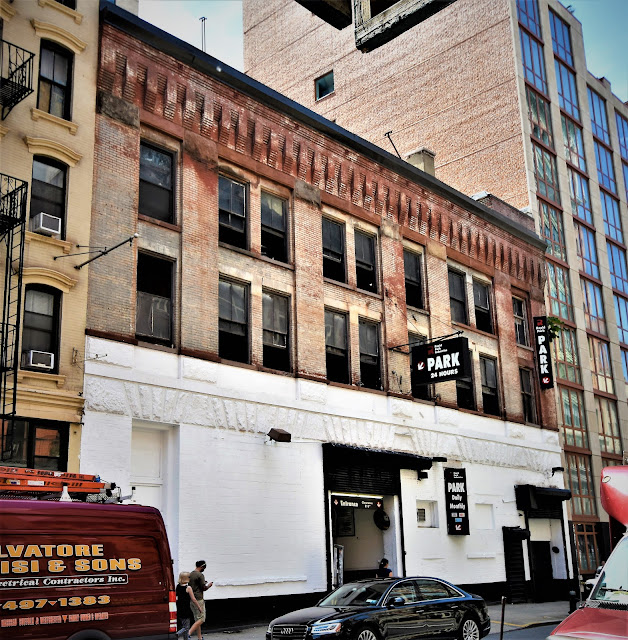 Garage owners of the 20th century were understandably more interested in the functionality of their buildings than in their architectural personalities.  The ground floor of the old O'Neill stables suffered brutal alterations over the next few decades.  Today only a close inspection of the stonework, obscured by a thick coat of white paint, identifies the openings from which wagons loaded with packages once headed off to the brownstone homes of their female shoppers.